The research also found that the three reservoirs holding water from the Dongjiang, a river in Guangdong province, contained higher levels of perfluorinated compounds, or PFCs, than the other two reservoirs that only collected rainwater.

Researchers suspected that the river could be one of the main sources of PFCs in Hong Kong’s drinking water, as there was no direct agricultural, industrial or household pollution near where the samples were collected.

They urged the government to conduct regular tests on the levels of new man-made chemicals in drinking water to keep track of changes in the water’s quality. 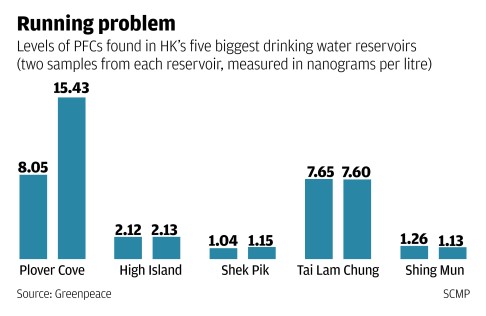 They found that Plover Cove contained the highest levels of PFCs – between 8 nanograms per litre and 15.4ng/l. The lowest levels among the samples was in Shek Pik, from 1ng/l to around 1.2ng/l.

Greenpower staff takes a sample from one of the reservoirs in Hong Kong.The levels of PFCs in Plover Cove as well as High Island and Tai Lam Chung, which all hold water from the Dongjiang, were found to be higher than those of Shing Mun and Shek Pik, which collect rainwater.

Greenpeace senior campaigner Kate Lin Pui-yee said that although there was no international standard regulating PFC levels in water, an international convention recommended a complete prohibition of using the compounds in manufacturing.

The Dongjiang River near the city of Heyuan further north in Guangdong province from Shenzhen. Photo: Dickson LeeLin said the chemicals could remain in the environment for up to 50 years and were exceedingly difficult to break down. She said the chemicals could accumulate in animals’ bodies, weaken their immune and secretion systems, and even lead to cancer.

As PFCs are both waterproof and oilproof, they were widely used in manufacturing clothes for outdoor use, semiconductors and liquid-crystal display monitors.