Members of the public were invited to ask questions about the science and ethics of water fluoridation to a panel of scientists, politicians and health professionals, in a free event for Hull Science Festival.

The ‘Water Fluoridation Conversation’ was the first of a new format for our public events, designed to enable two-way conversations between scientists and the public on everyday issues with a link to chemistry.

Hull is one of the worst areas in the UK for dental health, and Hull City Council is currently exploring a scheme to fluoridate the city’s water supply. Fluoridating public water supplies has been shown to have a hugely positive impact on dental health in other areas of the country, but the process is not without opposition, and many local residents have concerns about the plans. 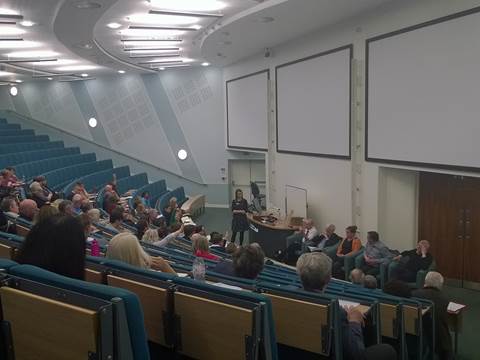 Professor Mark Lorch, associate dean for engagement at the University of Hull’s science faculty, and director of the Hull Science Festival, suggested the topic for our first conversation. He wanted to provide a space for people to find out more about the chemistry behind such an emotive local issue, and give people an opportunity to raise their concerns with those qualified to talk about the issue from the perspectives of health, ethics, politics and science.

Dr Susan Vickers, our public engagement lead, chaired the event, giving each panel member two minutes to sum up their experience and opinions, before opening the floor to questions from the audience.

“Everyone must be allowed to have an opinion on the future, and this means giving the public the confidence to discuss matters relating to chemistry,” explains Susan. “There are ethical issues and personal preferences to consider with issues like water fluoridation, even if the weight of scientific evidence currently available shows that it is safe. Events like this embrace chemistry as a topic for conversation and allow chemical scientists and the public to listen and respond to each other.”

The resulting 90 minute discussion covered questions on health concerns, how to tell sound scientific research from poorly conducted studies, whether water fluoridation could be seen as ‘mass medication’, and whether artificially fluoridated water is chemically different to that containing naturally occurring fluoride.

Alan Johnson MP also gave an overview of how the plans for water fluoridation would proceed; assuring audience members there would be full public consultations before any decisions were made.

While emotions occasionally ran high, the debate between audience members and panellists remained civil and respectful. A particularly poignant moment came as a father expressed fears that his young son might be allergic to fluoride, and had suffered some hospitalising side effects caused by, his parents believe, fluoridated toothpaste. Local dentist Simon Hearnshaw explained it was unlikely to be fluoride, but could be one of the many other substances found in toothpaste, and offered his support to find out what was causing the problem.

Audience member Anusha, a Masters student in dental public health at the University of Sheffield, had studied the science behind water fluoridation, but hadn’t previously understood public concerns about the ethics. “Before I came to the event I was sure that we should be fluoridating water for health benefits,” she said, “But people raised questions about things I hadn’t thought about – for example why should people be forced to drink fluoridated water? It made me think more about the wider issues.”

Systems analyst Joseph, also in the audience, said: “It was really interesting; there was a lot of good science and it was good to hear people pushing back against some of the less scientific viewpoints. I liked that someone said ‘you can have an opinion on the ethics but you can’t have an opinion on the science’. I think [the format] is good as it does mean people can voice their opinions.”