home // News // Tainted water: how a crippling bone disease is linked to drought in India //

Dusk is already beginning to settle on the small village of Saibandathanda in the district of Nalgonda in central India, but it does not bother Suvarna Ramavath.

Undeterred by the fading light, she makes deft strokes onto a page adorned with intricate sketches of peacock feathers. Behind her pictures of women in lavish pink saris dance across the walls.

But the scene, which could be straight out of one of the 23-year-old’s favourite Bollywood movies, is a far cry from the day-to-day reality of her life. Suvarna is crippled by the debilitating bone disease fluorosis and she has not left the bed where she is now sitting for seven years.

Drawing, she explains, is her escape. “If I use my imagination, I can draw whatever I like.”

Prevalent across rural India, fluorosis is caused by excessive consumption of the mineral fluoride, usually through drinking contaminated groundwater. As fluoride builds up in the body it leads to skeletal deformities

“When fluoride is retained in the body, 99 per cent is in the bones,” says Dr Raja Reddy, a neurologist who has operated on hundreds of the district’s fluorosis patients. This leads to ossification of the bones.

“The bones thicken and the ligaments become calcified, and they press upon the spinal cord to the extent that the patient becomes paralysed,” he adds.

It is an affliction all too familiar to many residents of drought-prone Nalgonda, where up to 69 per cent of the residents are estimated to be affected to some extent by the condition.

Naturally high levels of fluoride in the rocks, combined with an increasing dependence on drinking water sourced from boreholes drilled deep into the ground where the water is more likely to be contaminated, have resulted in fluoride levels in some village water sources of over 10 parts per million, almost seven times the maximum level recommended by the World Health Organization.

Although the link between groundwater and fluorosis has long been understood, a lack of alternative water sources means that many of the residents in remote villages such as Saibandathanda had little choice but to rely on it. “We knew that borewell water was a little bit dangerous, but everyone drank it, so we did too,” says Suvarna. 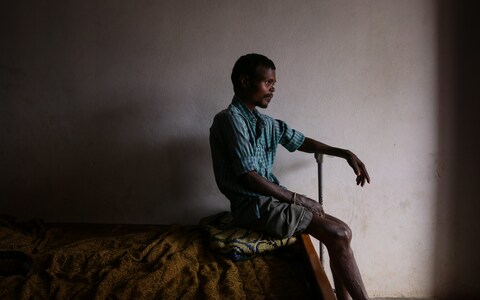 The impact is devastating. Ossification of the bones is irreversible, and the later stages of the disease restricts the movement, the digestion and even breathing of sufferers.

“When I was 15 I could walk with a stick …I used to be able to use the washroom by myself,” says Suvarna, who only stopped drinking the contaminated borehole water last year. “But now I can’t do anything. I can’t even feed myself.”

With climate change set to exacerbate India’s already widespread water crisis, more and more of the population will be forced to rely on groundwater as their primary or sole source of water for drinking and crop irrigation, putting them at increasing risk of excessive fluoride intake.

“People need water. Good drinking water,” says Dr Reddy. “But rural water schemes are all groundwater based. So fluorosis is definitely going to get worse.”

Diagnosed at the age of 18, he believes that his condition is directly linked to water scarcity in the region. “There are no rains, that’s why the groundwater levels are going down, and we kept having to drill deeper into the ground.”

In constant pain, he is only able to walk with the help of a stick, and has to depend on his wife to provide financial support for the family’s two children because he is unable to work.

Despite his difficulties however, Anthaiah is hopeful for the future.

He recently began attending physiotherapy sessions at the country’s first Fluorosis Rehabilitation Centre (FRC), which opened in February this year.

A joint initiative overseen by Dr Gaurav Uppal, a senior official in the region, and implemented by Inrem Foundation, a research institute, the centre is part of a wider scheme to tackle fluorosis through an integrated approach of nutrition programmes, physiotherapy and water management.

For Anthaiah, a combination of physiotherapy sessions three times a week and nutritional supplements at the FRC have increased his mobility and provided significant pain relief.

“If patients get a little bit more mobility – if they can even eat on their own, then that itself is a great achievement,” says Suneetha Sapur, Inrem’s district coordinator.

A nutritionist by training, Ms Sapur also emphasises the importance of diet in mitigating fluorosis. Calcium has been shown to block the skeleton’s retention of fluoride, whereas magnesium and vitamin C can help to flush it out of the body.

At Ms Sapur’s instigation, Inrem runs education and awareness programmes on nutrition in schools and childcare and maternal healthcare centres across the district.

A card-based game where players have to select the cards with photos of food types they have eaten that week has proved particularly popular among school children.

Older residents have also taken the nutrition training to heart, with many growing plants such as custard apples, which are rich in vitamin C and magnesium.

The Inrem Foundation hopes to expand this effort by planting what Ms Sapur describes as “small community food forests” of nutrient-rich crops in every village across the district.

For patients in the more advanced stages of skeletal fluorosis, doctors such as Dr Reddy have also had success in alleviating symptoms by surgery, removing ossified bone to relieve pressure on the spinal cord and internal organs.

Chinnasaidulu Arpula underwent surgery in 2015, after becoming crippled by fluorosis in his early 20s. “Before the surgery, I could not walk, I was in lots of pain,” he says, adding that he felt “very unlucky” to be born in Nalgonda. “But now at least I can walk outside with my children.”

Dr Reddy warns that surgery can only go so far in the fight against fluorosis. “Certain cases, we can make them walk and improve them, but ultimately not everybody is suitable for surgery,” he says, calling instead for an approach which prevents fluorosis in the first place. “I think to myself, why can’t we prevent this disease, if it is simply caused by excess fluoride from the water?”

Attempts to provide fresh water in the past have proved unsuccessful; although tankers containing clean water from the river Krishna could be delivered to afflicted villages, the Inrem Foundation had difficulty persuading the residents to drink the water, which often had an odd taste from being left in the tankers for too long.

“If people don’t clean out the water tanks, then the water is muddy, and again they turn to the fluoride water,” explains Ms Sapur.

Since 2016 however, the team has been overseeing the implementation of Mission Bhagiratha, a state government scheme which promises to redirect water though giant pipelines from the river Krishna, eventually providing over 20 million residents in the state of Telangana – where Nalgonda is situated – with fresh tap water.

The project should be finished within the next few months, although there are likely to be gaps in coverage because of issues over land rights.

For some, however, the measures come too late. Suvarna’s older brother, also a fluorosis sufferer, was the one who taught her how to draw.

“He used to draw when he got bored,” says Suvarna. “When I draw now, it reminds me of him”.

Eight years ago, when Suvarna was 15, he died from complications related to fluorosis. He was just 16 years old.

And despite the successes in Nalgonda so far, with the water crisis set to worsen across the country, Ms Sapur also realises that the team has an uphill struggle ahead of them.

“We have come to realise that borewells are not the answer … I just hope it is not too late.”