The Issue of Science

The discussion ought to end right there. Who in the world would ever think of poisoning our public water supply?

But, no. The discussion goes on. Proponents of fluoridation seem to be confused by THEIR science. They conflate the two types of fluoride into One: They have the audacity to maintain that all fluoride is fluoride.

Of course, Mother Nature can be “naturally” poisonous. But she is discreet; she doesn’t tell everyone. And she leaves it to chance. Besides, natural poison might be there to toughen our immune system. And another difference. Mother Nature offers her “poison” free of charge!

The Issue of Smallness

Proponents of fluoridation try to convince themselves and others that permitted ppm (parts per million) of fluoride are SO small that we need to drink a great amount of water before we go beyond the official guidelines of safety.

They do not acknowledge that many of us do, indeed, drink that UNSAFE amount of water OVER TIME. The “small” doses of fluoride are not expelled; rather, they ACCUMULATE in our body and cause incalculable damage especially to all our soft organs.

In tune with ancient wisdom, those who do systems analysis know very well that it is the last straw that breaks the camel’s back. Chaos theory recognizes that the swing of a butterfly’s wing in Brazil can cause a tornado in Texas. It is the last “small” dose ingested that, added to all other “small” parts, can cause incalculable damage to our health.

Once the issue of fluoride in our public water is analyzed in its entirety, another issue comes to the fore. Fervent believers in the value of fluoridation say that the largest amounts of fluoride “pass though” our bodies.

Well, where does this fluoride end up? In the oceans, of course.

Oh, the fishes, the poor fishes. If only they could talk.

Will fervent believers in fluoridation change their attitudes when the next whales, or dolphins, or seals that beach themselves on our shores reveal small parts of fluoride in their bodies?

Who are the people who support fluoridation? Apart from those who are heavily influenced by a misguided self-interest, you know “We all have to die once; the guy with the most toys wins.” Apart from these people, there are the gullible.

Who are the gullible? The do-gooders, of course.

Strangely enough, some of the most vociferous supporters of fluoridation are people who sport the moniker DDS after their name. They are Doctors in Dental Surgery – as if dental surgery had anything to do with toxicology.

It is FOR OUR GOOD, of course, that these people want to add fluoride to our public water supply.

The “good” they offer is a potential reduction of cavities by 25%. This is the best that flawed studies of the 50s could come up with. (Later studies have emphasized that benefits from fluoride derive from topical applications to the teeth; not the scatter shot of spreading fluoride in the public water supply).

Whatever the estimated benefit, notice the implicit acknowledgment. The use of fluoride is 75% INEFFECTIVE.

Now this outcome might even be tolerable, if the cost/benefit analysis of fluoride were not so unbalanced. Measured against such a miniscule POTENTIAL BENEFIT, this is the risk:

Authorities Are Running Away from Support

One more thing, at least, our Good Doctors have to explain to convince us of the validity of their position: Why is the trend AWAY from fluoridation? Dear Doctors, please, tell us why so many authorities and so many cities and towns, all over the world, are running away from the old flush of fascination with fluoride.

The following diagram is from Lafayette’s Fluoride Frenzy (David MacNeal, YellowScene Magazine, June 18, 2013). MacNeal mentions that many people get “artificial” fluoride exposure not only from treated water but also from other sources such as toothpaste. 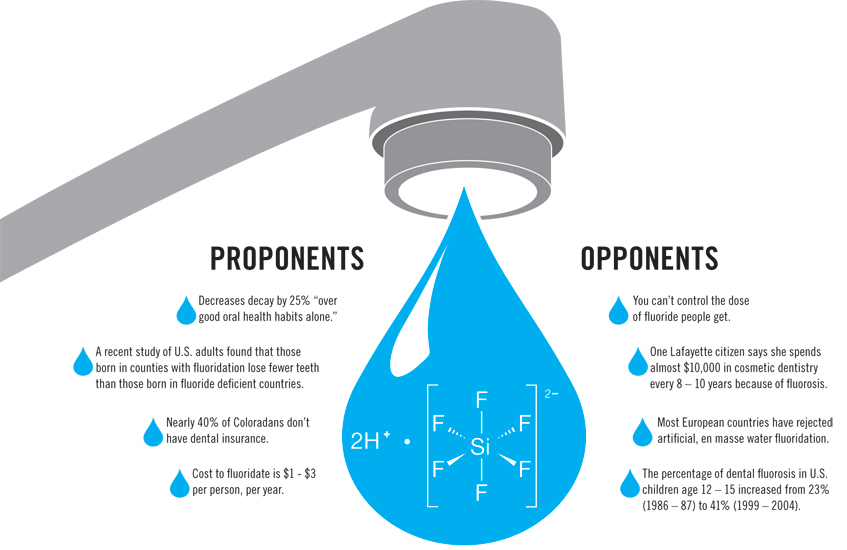