home // News // Across India, high levels of toxins in groundwater //

NEW DELHI: Discharge of toxic elements from industries and landfills and diffused sources of pollution like fertilisers and pesticides over the years has resulted in high levels of contamination of groundwater with the level of nitrates exceeding permissible limits in more than 50% districts of India.

Apart from nitrate contamination, the presence of fluoride, iron, arsenic and heavy metals has also touched worrying levels, information provided by the government to Parliament reveals.

According to WHO, nitrate in drinking water can cause methaemoglobinaemia or the decreased ability of blood to carry vital oxygen around the body.

Overall, the groundwater is contaminated with the presence of excess nitrate in as many as 386 districts followed by fluoride in 335 districts, iron in 301 districts, salinity in 212, arsenic in 153 districts, lead in 93 districts, chromium in 30 districts and cadmium in 24 districts of different states across India. Many districts have more than one, two or three toxic elements in their groundwater.

Though the government noted that “groundwater in major parts of the country is potable”, it underlined the contamination in many parts due to presence of one or more toxic elements. “…some parts of various states are contaminated by salinity, arsenic, fluoride, iron, nitrate and heavy metals beyond permissible limits of the Bureau of Indian Standards (BIS),” said minister of state for water resources Arjun Ram Meghwal.

Drinking of arsenic-rich water over a long period results in various health effects including skin cancer, cancers of the bladder, kidney and lung, and diseases of the blood vessels of the legs and feet, and possibly also diabetes, high blood pressure and reproductive disorders, according to WHO.

Similarly, presence of other chemicals beyond their permissible limits are known to cause severe health hazards in humans and animals.

The chemical quality of groundwater (GW) is monitored once a year by the Central Ground Water Board (CGWB) through a network of about 15,000 observation wells located all over the country. The monitoring details show that states like Punjab, Haryana, Uttar Pradesh, Tamil Nadu, Telangana and West Bengal reported presence of all types of toxic elements, including heavy metals, in the groundwater of their one or the other district. 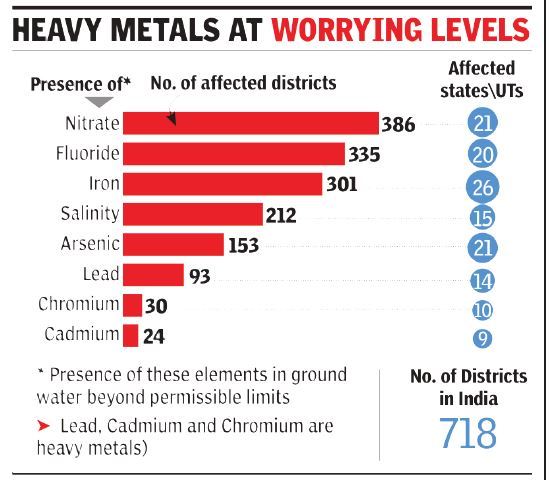 The minister said industrial discharges, landfills, fertilisers and pesticides are “possible sources of contamination of groundwater”. Experts believe geological sources also cause contamination when GW levels fall steeply to levels where these toxic elements are present. Indiscriminate extraction has already pushed down these levels in many parts of the country.

Asked about a solution to the problem of contamination, water expert Himanshu Thakkar of the South Asia Network on Dams, Rivers & People (SANDRP) said, “In areas where GW is already contaminated, there can be several treatment-related solutions, but the least expensive solution is rainwater harvesting and using that water with necessary minimum treatment.”

Reacting on the extent of contamination, he said, “The whole problem is basically related to GW management. We need to firstly acknowledge that GW is India’s water lifeline. Secondly, we need to ensure protection of recharge systems. Thirdly, we need to create artificial recharge mechanisms.

“But most importantly, we need to create a legally empowered bottom up groundwater regulatory mechanism in which the aquifer level associations or cooperatives or gram sabhas need to be equipped and empowered to regulate groundwater use commensurate with the recharge.”

Referring to industrial discharges that led to GW contamination, Thakkar said, “The industries need to be under strict rules to ensure that they treat all the effluents and this can be accomplished if local communities and their representatives are part of the legally empowered monitoring mechanisms.”