home // News // An X-ray Like a Christmas Tree: One Refugee’s Mysterious Case //

Mohammed Hassan arrived in Canada from a Kenyan refugee camp in September 2015, 46 years old and crippled by such pain that he walked like a man decades older.

His pain had grown slowly. It began as stiffness in his knees and fingers, then developed into a paralyzing ache up his back and down his legs. His hands hurt too much to hold anything, and he could not walk more than 100 meters at a time.

Over the years, healthcare providers had checked him for rheumatism, tuberculosis, and an excess of protein in his diet but found no cause for his debilitating pain.

By the time he arrived in Canada, the medical odyssey to diagnose his mysterious condition had just begun. Again and again, Hassan saw doctors who were flummoxed by his inexplicable pain. Conventional investigations turned up dead ends. Like many refugees who arrive in North America after long periods of displacement, Hassan’s problems had an unconventional source. It took a group of curious physicians from across the continent to figure out what it was — their finding might help hundreds of thousands of other refugees.

A Health Crisis for Millions

Hassan was born in Somalia in 1969 and was orphaned at the age of 8. As violence and drought worsened in his country, he fled to Kenya. “Life was very, very hard,” he told Medscape through a friend who volunteered as a translator.

In January 2007, Hassan arrived at the UN Kakuma Camp in the northwest region of Kenya. The camp was established in 1992 to give refuge to thousands of “lost boys of Sudan” who were escaping their country’s civil war. Originally designed to house 70,000 people, the camp’s population had grown to 183,000 by 2015.

Hassan hoped Kakuma would be a safe stopover on the way to resettlement in a new country. But resettlement is a slow process. The average refugee at Kakuma spends 17 years living at the camp, according to the United Nations.

About 1 in 4 refugees live in camps like Kakuma, which grow into little cities as more people arrive, straining the limited infrastructure, says Paul B. Spiegel, MD, MPH, director of the Johns Hopkins’ Center for Humanitarian Health, Baltimore, Maryland.

“People call it warehousing of people…. Perhaps that’s a bit too harsh. But once you start a camp, people just seem to stay there, unfortunately,” he said.

Of 1.4 million refugees estimated to be in urgent need of resettlement worldwide, only 63,696 were resettled through the UN Refugee Agency (UNHCR) last year, according to the United Nations. There were 79.5 million forcibly displaced people worldwide at the end of 2019, including 20.4 million refugees under the UNHCR’s mandate.

The result is a health crisis for millions like Hassan that begins before their displacement and continues well into their resettlement. Camps and cities that take in refugees do not have the infrastructure to manage a sudden influx of human beings in crisis. There are problems of water scarcity, infectious disease, chronic malnutrition, violence, sexual violence against women, and poverty, in addition to a tremendous burden of mental and physical trauma. 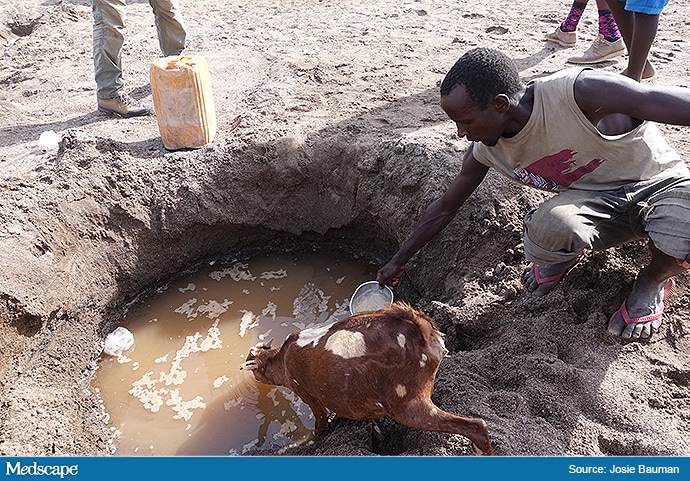 A Kakuma resident and a goat share water from the same “scoop hole” in the main ephemeral river bed, Laga Tarach.

“Long periods of forced displacement are bad for health, full stop,” said Gabriel Fabreau, MD, MPH, an internist at the University of Calgary and the Mosaic Refugee Health Clinic, Calgary, Canada. “The longer those periods of forced displacement without stability in resource-limited settings, the worse the resultant health and the higher the likelihood that there will be long-term detrimental impact.”

Health challenges remain significant even for those who are resettled, as Hassan eventually was in Canada. Some have medical problems that family or emergency physicians have never seen in the countries of resettlement, making it difficult to diagnose and treat them, said Fabreau.

He said physicians who see refugee patients should expect to spend extra time with them. He recommends taking a detailed medical history and using a professional translator. Many refugees have chronic health problems that could not be managed during migration, as well as undiagnosed congenital diseases and high levels of persistent psychological distress. Some have a low degree of literacy, numeracy, and health literacy, and they land in settings where the health system can be difficult to navigate.

“Keep in mind the idea of patience and compassion,” he said. “I’ve been humbled a million times by this population that have, by definition, lost trust in institutions.”

After arriving at Kakuma in 2007, Hassan began selling unused food rations for income. From there, he developed a business. He built a small restaurant with a generator, a garden, and a television for people to follow the news. He brought in bottled water for customers to drink.

He remembers feeling unwell for the first time around 2010. In the mornings, he stood up slowly and bent gingerly at the knees a few times before he could take a step. He grew tired quickly. He started to rely on a cane. By 2014, he struggled to leave his home at all.

Nine years after he first walked into Kakuma, Hassan, his wife, and son were accepted for resettlement in Canada. By then, he could no longer rise from a chair alone. He walked with a shuffle and had pronounced kyphosis. 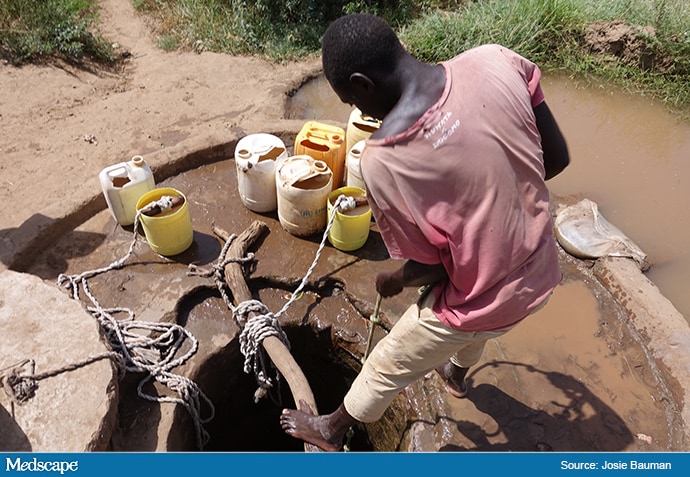 Members of the local Turkana community and refugee students participate in groundwater exploration in the Kakuma Refugee Camp in January, 2018.

After arriving in Canada, he told Annalee Coakley, MD, medical director of the Mosaic Refugee Health Clinic, in Calgary, about his pain and about a moped accident he’d been in years before. She ordered tests to investigate. “His x-ray kind of lit up like a Christmas tree,” she said. His bone density test showed lumbar spine and femoral neck scores of 8.7 and 3.7, respectively. An attempted bone marrow biopsy failed when specialists could not get a needle through his bone.

Gregory Kline, MD, an endocrinologist at the University of Calgary and director of a metabolic bone clinic, suggested the extensive osteosclerosis could be related to fluoride. But tests showed Hassan’s serum and urine fluoride were within the normal range for someone drinking municipally fluoridated water. “It looked like a bit of a dead end,” said Kline.

Another piece of evidence popped up by chance that made Hassan’s case difficult to let go. It suggested that what was happening to him could affect the nearly 200,000 people still living at Kakuma.

The East African Rift System, where Kakuma is located, is composed of volcanic rock with naturally high concentrations of fluoride. The water in the region is a well-known cause of dental fluorosis; the persons most affected are the poor who live in rural areas.

By chance, Bauman met Coakley as she was prepping for a visit to Kakuma and mentioned the unusually high fluoride levels in the local water.

She recalled his findings when she recognized fluorosis as a possible cause of her patient’s debilitating pain. “When I saw fluorosis on his differential, I thought, ‘yes, of course,’ ” she said. 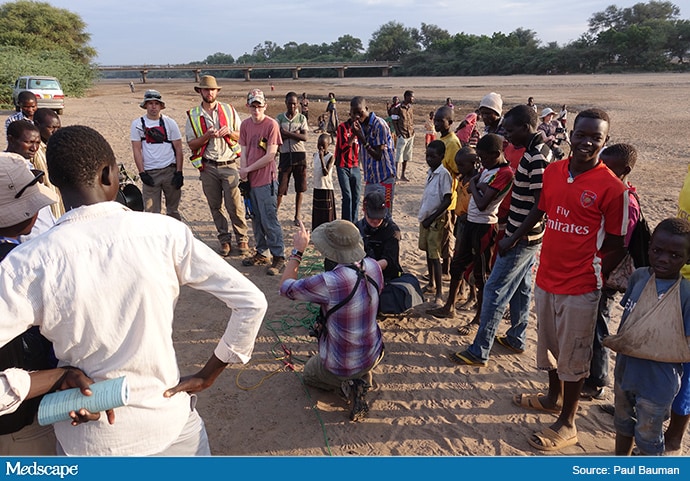 Geophysicists laying out a survey line on their first field day in Kakuma.

Dental fluorosis is evident among people at Kakuma, said Bauman, but there were no published reports of skeletal fluorosis, and it could be easily missed in the population, he said. “It’s hard to say that you would recognize skeletal fluorosis because people suffer from many kinds of trauma. There are all kinds of reasons people might be limping.”

There was still a question of how to confirm the diagnosis. Coakley, Fabreau, and Bauman met Hassan at a coffee shop to share their hypothesis with him. Bauman rolled out maps of the camp and asked Hassan to indicate where he had lived and from which well he had drawn water. Hassan pointed to a section supplied by a single well that, based on Bauman’s assessments, consistently contained high fluoride concentrations between 2014 and 2016, including a measurement of 8.4 mg/L in July 2016 — six times higher than the WHO guideline of 1.5 mg/L or less.

Hassan said the water from the well had a strong taste, but he drank it throughout the day to stay hydrated in the 40° C (104° F) temperatures. He would often boil the water to make tea, inadvertently increasing the fluoride concentration. For his wife and son, he bought bottled water.

Hassan underwent an open bone biopsy, which revealed osteosclerosis with severe low turnover. Kline reached out to several endocrinologists in the United States, who connected him with a scientific lab in Georgia that could measure bone fluoride content. Hassan’s bone fragment was forwarded from Canada to the Mayo Clinic and on again to the Georgia lab, where tests showed a fluoride ash weight of 6.73 g/kg, far above than the normal range of 0.5 – 1.2 g.

A Positive Outcome for One Patient, Uncertain Outcomes for Others

Hassan’s case, published in The Lancet in 2019, illustrates the challenges of refugee healthcare, even among those who are resettled in a high-resource environment, said Fabreau. “The chain of knowledge transmission could easily have broken anywhere along that line, and the story could have been different or may have just been delayed.”

Amy Zeidan, MD, an assistant professor of emergency medicine at Emory University and director of the Georgia Human Rights Clinic, in Atlanta, said she wonders how many cases like Hassan’s go unreported. “It’s a really good example of how environmental health impacts those who are already most at risk and how there are long-term health outcomes for our refugee populations who settle in short-term areas that become long term,” she said.

In 2016, Bauman, working with Geoscientists Without Borders and a team of local refugees and Turkana people, drilled three new wells for Kakuma. Rather than targeting shallower volcanic aquifers, as was done with the earlier system, they relied on deep paleochannels. The UNHCR has since adopted a strategy of drilling in paleochannels in the area, which yield water with lower fluoride concentrations than those in volcanic aquifers, he said. 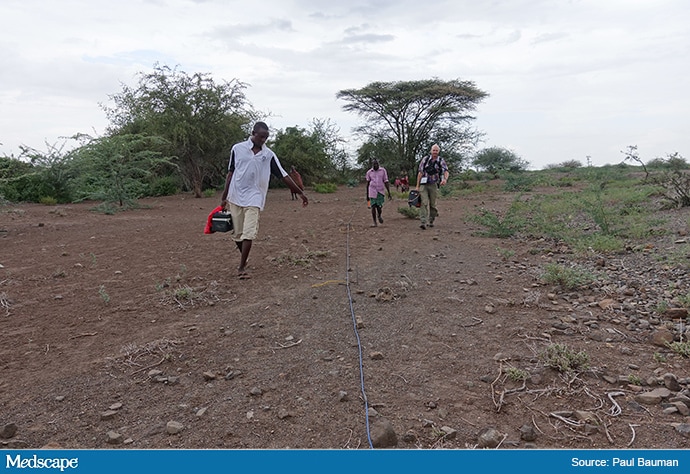 Geophysicists laying out a survey line across the ephemeral river Laga Elilia in search of groundwater to supply the new Kalobeyei Refugee Camp.

There is no treatment for skeletal fluorosis, but because he is no longer exposed to fluoride, Hassan’s health has improved over time. He still walks slowly and cannot work, which means he cannot privately sponsor his remaining family to join him in Canada. He said he does not hold the United Nations at fault: they gave him shelter and brought him to Canada. However, he hopes that one day his remaining family members in Kenya will be resettled into Canada.

Kline said Hassan’s case changed the way he approaches patients with seemingly inexplicable pain. “So often in medicine, we see people whose symptoms are vague, and their physical exam findings are uncertain,” he said. Healthcare providers shouldn’t assume that the causes of a person’s pain can’t be understood or that the patient is malingering, he said.

“This man had a really, really important, rare disease that it took a consortium of specialists across Canada and the US to sort out. It didn’t fit the bill for a lot of stuff we were thinking about early on, and in the end, it was a serious problem.”

Christina Frangou is a Canadian National Newspaper Award-winning journalist and four-time National Magazine Award nominee. Her work has appeared in The Globe and Mail, The Guardian, and Maclean’s, among others. Based in Calgary, she specializes in covering health and social issues.