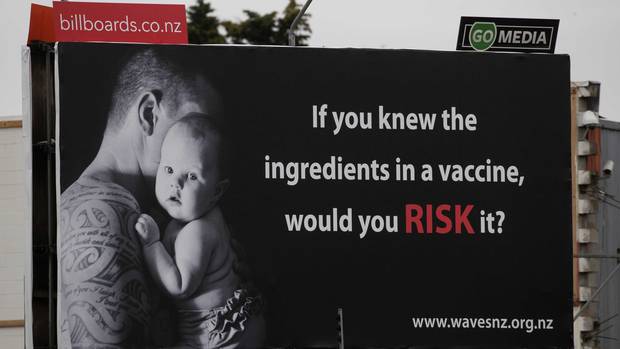 A controversial anti-vaxxer billboard was by far and away the most complained-about advert last year, the Adverstising Standards Authority (ASA) has revealed.

The billboard, which contained the phrase, “If you knew the ingredients in a vaccine, would you RISK it?” triggered 146 complaints from the public.

The second-most complained about advert – a TV spot from the Breast Cancer Foundation – only had 13.

“You should be able to trust the ads you see,” said ASA chief executive Hilary Souter. “If an ad is wrong, the ASA is here to help put it right.”

Waves is a group which promotes the debunked theory that vaccines cause autism, among other fringe and unsubstantiated claims.

Its billboard, which went up  beside the ?tahuhu off-ramp on Auckland’s Southern Motorway in October, was taken down within days. The ASA upheld the dozens of complaints, saying the billboard was misleading and “engendered fear”.

The Breast Cancer Foundation’s advert screened on TV. It featured a mother and daughter talking about the disease, and a voiceover saying: “Breast cancer is contagious. It touches the whole family.”

Complainants pointed out cancer isn’t contagious. The foundation removed that phrase, and the matter was considered settled.

Coming in third was another TV advert featuring women’s breasts – this one for Berlie bras. It showed women trying on uncomfortable bras, before settling on a comfortable bra manufactured by the advertiser.

Berlei rejected the eight complaints the ad was sexually suggestive, the ASA agreeing it actually “depicted breasts in an unglamorous and truthful way to highlight the discomfort of ill-fitting bras”.

Also generating eight complaints was a Burger King TV spot which showed people barbequing inside their van. It had a disclaimer, but it wasn’t clear enough – the matter was considered settled after Burger King fixed it so it was easier to see.

Coming in fifth was a poster/newspaper advert claiming fluoride “is a neurotoxin that reduces children’s IQ”. Six people’s complaints were initially upheld in part, but the group behind it – Fluoride Free NZ – appealed successfully, proving it had provided “some” evidence for its claim and it was clear an anti-fluoride lobby group was behind it.

Forty-two percent of adverts complained about screened on TV, 17 percent were found on the advertisers’ website, 12 percent digital/social media, 11 percent out on the streets, 8 percent in print, 6 percent on radio and 2 percent in addressed mail.

Almost half were accused of being misleading, a third of breaching social responsibility rules and 14 percent of offending taste and decency.

Therapeutics and health was the most common category for complaints (17 percet) closely followed by food (16 percent) and household goods (15 percent).

One hundred and thirty-nine adverts were changed or removed after complaints.

“In 2018, 63 percent of the advertisements judged to have a case to answer resulted in removal or change,” said ASA chair Heather Roy. “The average time to deal with a complaint is just over two weeks.”

The most-complained about advert of 2016 was a TV clip for 2 Cheap Cars in which a Japanese man repeatedly said the word ‘ah so’ in way that sounded like ‘asshole’. It received 27 complaints.