A ten-month debate at Bega Valley Shire Council came to an end this afternoon with councilors voting to add fluoride to the shire’s remaining water supplies.

Council has been adding fluoride to the Bega-Tathra system since 1963, today’s six – two result in the chamber will see it added to two of Council’s remaining water supplies.

The long process has been characterised by conflicting science and at times hostile debate, which was on show again at today’s council meeting.

Before a public gallery of around 30 people, five community members addressed councilors urging them to reject the idea, most suggesting that Council would face legal action if they proceeded.

“I do not give council permission to introduce this toxic substance as mass medication without choice into my water supply,” Merriwinga resident, Sean Burke said.

Negative health impacts have been a real fear of those opposing the introduction. Reduced IQ, thyroid complaints, cancer, fertility problems, arthritis, and kidney disease have all been raised during the course of the debate.

“Imagine the outcry if you were to add some other medicine to the water?” Bermagui’s Anthony Hereford argued.

Pambula’s Fraser Buchanan, speaking for the Bega Valley Residents and Ratepayers Association suggested the recent NSW Health phone survey on the issue was biased in favour of fluoride.

Five hundred residents were quizzed over the summer holidays and asked, “Do you agree with adding fluoride to the public drinking supply to try to prevent tooth decay?”

“Step up and show you are unwilling to be part of a contrived process,” Mr Buchanan urged Councilors.

The validity of the survey was a theme that run through the discussion, however some councilors were clearly swayed by the results – 66.2% responded ‘yes’, 28.4% responded ‘no’, 5.2% were unsure and only 0.2% preferred not to respond to the survey.

Today’s decision for Bega Valley Shire Council was prompted by NSW Health asking regional water utilities who don’t already incorporate fluoride into their water treatment processes to do so as a prevention of tooth decay.

With 96% of the state fluoridated, NSW Health is moving on the remaining 4% and is providing all the funds needed for the Bega Valley to come on board.

Councilors Cathy Griff and Jo Dodds argued strongly for those in the room campaigning against the idea.

Cr Griff moved a motion to defer the decision pending legal advice but that was defeated.

“The case is building against fluoride, I would like to think we could lead the way.”

Despite a general acceptance among councilors of the benefits of fluoride in preventing tooth decay, many also seemed frustrated at the conflicting science presented during the course of the debate with both sides undermining the quality of each others research.

“This triggers in me the precautionary principle,” Cr Dodds said.

“There is too much evidence of risk.”

With Councillor Mitchell Nadin on leave, the vote could have been split four all but it soon became clear of the eight remaining councilors, six would be saying ‘yes’ to fluoride.

Cr Robyn Bain said, “This gives everybody the chance to have good dental health.”

“Not everybody has the ability to afford good dental care, this is equitable.”

In voting for fluoride, Cr Liz Seckold said, “I will always advocate for the socially disadvantaged.”

“I am sick of being bullied by the anti-fluoride brigade,” she added.

Cobargo’s, Cr Tony Allen was of a similar view, “This will be of benefit to people across the shire.”

Heckled from the public gallery, Cr Sharon Tapscott cut short her speech suggesting, “You are only interested that I vote your way,” she said.

Cr Tapscott drew on the 46-year history of fluoride in the Bega – Tathra supply.

“We’ve had no health problems, that experience should guide us,” she said.

In voting ‘yes’ Pambula’s Russell Fitzpatrick said, “Good oral health is vital and has a huge impact on overall health.”

After rising to her feet at least five times to settle the rowdy gallery, Mayor Kristy McBain was among the last to speak on the issue.

Cr McBain drew a compassion between her own childhood drinking fluoridated water and that of her eight your old daughters.

She told the chamber her daughter has already had four fillings.

“She doesn’t come from a poor background, she brushes her teeth and we see the dentist,” Cr McBain said.

“The only difference is that I came from a fluoridated area she does not.”

Meaning that it is expected to be a number of years before the people of Candelo, Wolumla, Merimbula, Tura, Pambula, Eden, Kiah, Quaama, Cobargo, Brogo, Wallaga Lake, Bermagui are drinking fluoridated water.

In closing, Cr McBain made the point that fluoride was not the shires most pressing water issue, the Mayor suggesting that money would be better spent on building water filtration plants. 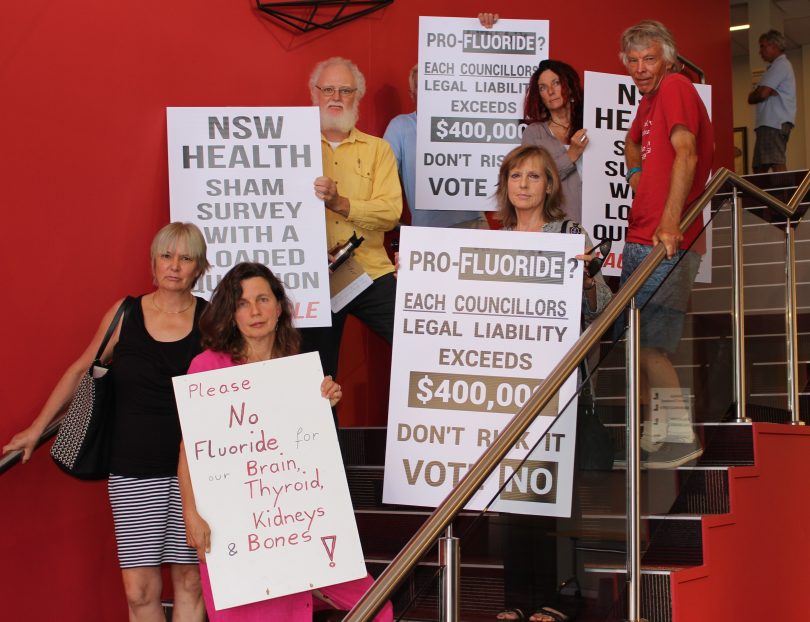 Some of those who attended today’s meeting of Bega Valley Shire Council. Photo: Ian Campbell.