Scientists have analysed breast milk from women living in cities in China and Sweden to check for 20 per- and polyfluoroalkyl substances (PFASs). The study detected significant levels of legacy PFASs and alternatives to those older PFASs, and is one of the first studies to detect 9-chlorohexadecafluoro-3-oxanone-1-sulfonic acid (F53-B) and 3H-Perfluoro-3-[(3-methoxy-propoxy)propanoic acid] (ADONA) in human breast milk.

‘Legacy PFASs such as perfluorooctane sulfonate (PFOS) and perfluorooctanoate (PFOA) are extremely persistent, accumulate in human blood and have been linked to adverse health effects in humans,’ explains Jon Benskin of Stockholm University in Sweden, who led the work. ‘In many cases, industry has replaced these legacy PFASs with short-chain alternatives, [which are] much less bioaccumulative, but just as persistent.’ PFOS and PFOA may also be immunotoxic, with evidence suggesting infant exposure in the womb can lead to lower birth weights.

A steady stream of new PFAS alternatives has made it difficult for scientists to keep track of the many compounds entering the market. Previous studies have therefore focused on legacy PFASs and has somewhat neglected the effect of emerging alternatives on human health. As a result, exposure levels of breastfed infants to PFASs is severely underestimated, says Benskin. ‘Most studies focus on a limited suite of legacy PFASs but in this study we wanted to include some PFASs that are less studied, such as F53-B.’ 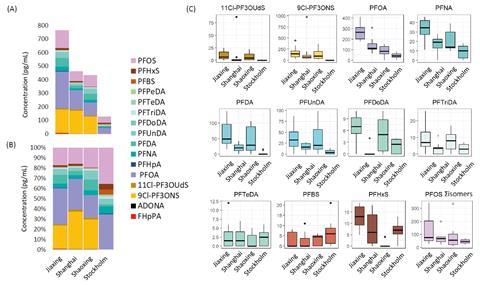 (A) Sum mean concentrations and (B) profiles normalised to 100% for PFASs determined in human milk samples from Shanghai, Jiaxing, and Shaoxing and Stockholm. (C) Box-whisker plots of individual concentrations

Concentrations of 20 legacy and emerging PFASs (namely F53-B and ADONA) were measured in human breast milk samples from 10 mothers from Stockholm in Sweden, and 30 mothers from Shanghai, Jiaxing and Shaoxing in China. The samples from China were collected from 2010–2016, while the samples from Stockholm were obtained in 2016. All samples were analysed by ultra-performance liquid chromatography-mass spectrometry (UPLC-MS), with the target PFASs quantitatively determined by either isotope dilution or an internal standard. Benskin describes capturing such a large and diverse number of compounds as ‘very challenging analytically’.

The study found that overall, the legacy compounds PFOA and PFOS occurred in the highest concentrations among all PFASs, in addition to F53-B, which is an emerging PFOS replacement. The highest concentration of all PFASs found across the three Chinese cities was F53-B, with concentrations of the main component of F53-B as high as 976pg/ml. F53-B was present in 100% of samples from the Chinese cities, but none from Stockholm. This may be due to the use of F53-B as a mist suppressant in the electroplating industry in China. The prevalence of such levels of F53-B, described as ‘extremely high’ by the researchers, is a cause for concern due to the limited data concerning F53-B pointing to it being toxic and highly persistent.

‘What is important from this study is that researchers analysed the breast milk for multiple PFASs and were able to use the breast milk levels as indicators of use of the replacements,’ says Wendy Heiger-Bernays, whose work at Boston University, US, looks at the impact of industrial chemicals, consumer products and pharmaceuticals in water and waste streams on human health. ‘[It is] rather frightening that researchers are using replacement PFASs in breast milk as a biomarker of exposure [which] demonstrates the widespread use of these unregulated chemicals.’

The researchers hope that their study will highlight the need for more comprehensive assessments of PFASs in human breast milk, and the need for future work to take into account the emerging PFASs alternatives. However, Benskin says ‘in most instances, the health benefits from breastfeeding outweigh the risks posed by PFAS exposure in breast milk.’

Due to the challenging nature of the analytical work, Benskin says it is possible that there are many PFASs in breast milk other than those reported in the current study. ‘Future work will apply non-target and total fluorine methods to try to determine what fraction of the total PFASs we are missing and to identify the structures that make up this fraction.’