Utah should take advantage of a grant to put air purifiers in its classrooms. 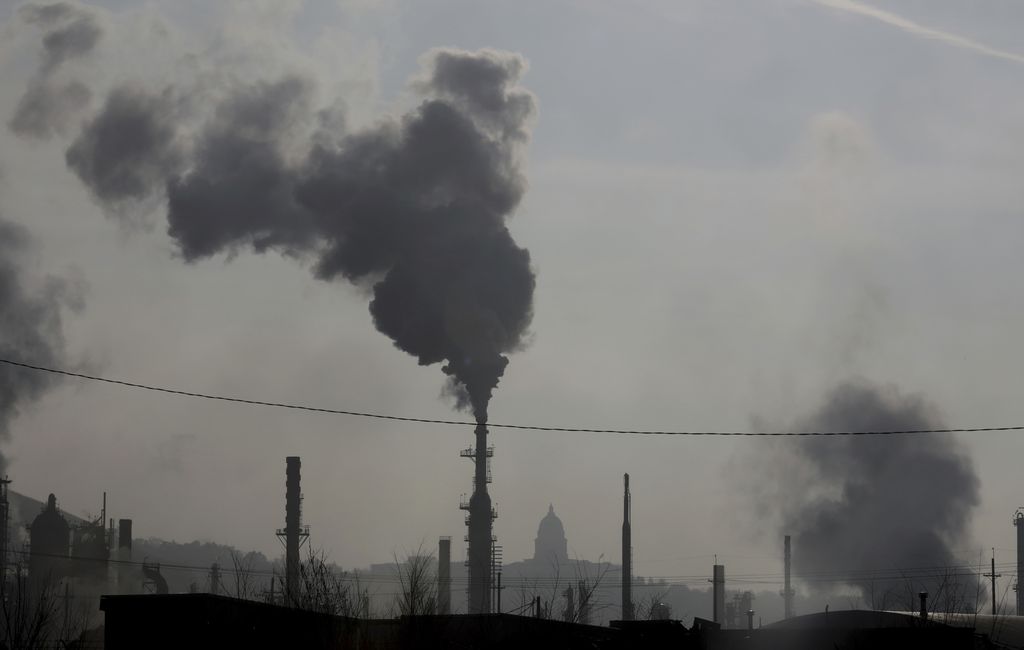 (AP Photo/Rick Bowmer, File) In this Dec. 10, 2018, photo, smokestacks near an oil refinery are seen in front of the Utah State Capitol as an inversion settles over

The catastrophic dumbing down of America has

in the movie “Don’t Look Up” and, before that, “Idiocracy.” A Stanford University think tank article earnestly postulates that a rise in gullibility has prompted voters in numerous developed countries to elect governments that defy their own interests.

Indeed, after global increases in IQ after World War II of about 3 points per decade, multiple studies in different countries have found those born since the mid-1970s manifest a shocking decline in IQ, seven points per generation.

This collapse of human intelligence has to be something in our physical or psychological environment. While contributors include socio-economic evisceration of the middle class, poor education systems, distraction by electronic devices, inadequate diets and even drug use, environmental toxins are likely playing a dominant role.

In 2014, internationally renowned researchers warned that children worldwide are suffering a “silent pandemic” of neurodevelopmental disorders — including autism, attention-deficit/ hyperactivity disorder, dyslexia, obsessive/compulsive disorder and other cognitive impairments — caused by industrial and environmental toxins. Their prevalence has steadily increased over the last two decades and millions of children are being victimized.

Autism strikes boys four times more often than girls. In 2012, Utah was number one in the nation in rates of autism, affecting one out of every 32 Utah boys according to the CDC. By 2018 Utah no longer led the nation only because other states caught up. Nonetheless, by 2018 the overall rate of autism in Utah 8-year-olds increased from 1.7% to 2.2%.Similar increases have been found with other developmental disorders.

The Stanford article states, “Increasingly, science suspects the 2.3 billion tons per year of man-made chemicals – many of them nerve poisons – which industrial society has unleashed on itself … which now permeate our air, our food, our water, our homes, workplaces, our bodies, and our genes on a daily basis. Substances to which … almost all humans are now exposed every moment of their existence from conception to expiry.”

We are awash in about 100 times more chemicals today than just two generations ago. Many are proven health hazards, especially as neurotoxins. We are all guinea pigs in a global toxicology experiment without our consent, that has no scientific design or constraints, conducted by people who have little understanding or concern about the consequences.

Extensive research has identified the most important neurotoxins — multiple components of air pollution, lead, mercury, arsenic, manganese, PCBs, fluoride, pesticides, flame retardants, phthalates, BPA, solvents and an army of endocrine disrupting chemicals. But they are just the tip of a very large iceberg. Most of them cross the placenta, contaminating the amniotic fluid, blood and tissues of the fetus at the most critical stages of organ development, especially the brain.

Utah children are exposed to more than their share. We have winter inversion particulate pollution, wildfire smoke and high ozone for months at a time. Airborne dust from expanding dry lake beds, principally the Great Salt Lake, is saturated with mercury, arsenic and lead and acknowledged by our own conservative lawmakers as an “environmental nuclear bomb.” Regardless of the source, neurotoxic heavy metals do not dissolve, degrade or disappear over time, they steadily accumulate in our environment, increasing everyone’s exposure.

Mosquito abatement districts are still spreading potent neurotoxic pesticides from airplanes in a vain attempt to suppress West Nile Virus (WNV), while ignoring that the incidence of WNV has dropped precipitously on its own in the last 18 years despite higher mosquito populations. A voter initiative in 2000 mandated fluoridization of Salt Lake City’s tap water. Two decades later, research has found overwhelming evidence that ingested fluoride is toxic to developing brains and should only be used topically. Thousands of pounds of lead pour out of Rio Tinto’s smelter smoke stack every year and settle over our homes, lawns and playgrounds.

Lost intelligence in one child is tragic, but on a global scale it’s catastrophic. Better public policy can reduce or eliminate most of these toxins. Clean air in school classrooms is a great place to start. Utah Physicians for a Healthy Environment are partnering with the Utah Department of Health and Human Services using a federal grant to place air purifiers in every class room, K-12. To make sure your school gets them, go to our website, https://www.uphe.org/free-air-purifiers-for-utah-schools/ or email brandi@uphe.org.

Cleaner air equals smarter children, and a better future for everyone. Brian Moench: A toxic selfishness is eating at the foundation of our country

Brian Moench: Utah does the dirty work for industrial polluters

Brian Moench: Where will we get the water for all of Utah’s growth?