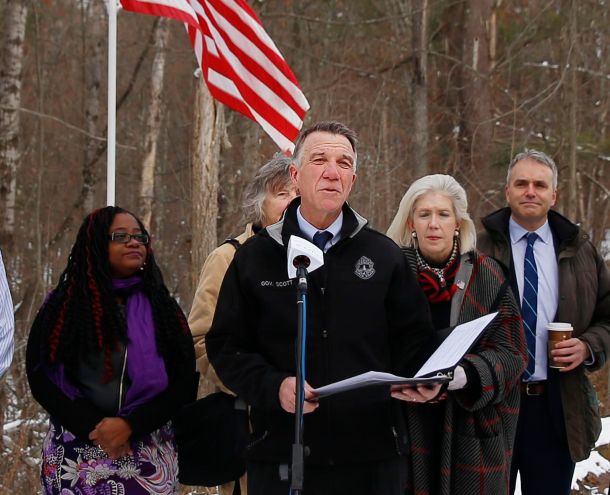 Gov. Phil Scott speaks in Bennington in December 2017 while celebrating completion of a section of municipal water line to address PFOA in local wells. With him are Reps. Kiah Morris, Alice Miller and Mary Morrissey, and Sen. Brian Campion. File photo by Holly Pelczynski/Bennington Banner

Vermont business leaders are calling on Gov. Phil Scott to veto legislation that would make it easier for Vermonters to sue companies that have released toxic substances, and require them to pay for medical testing to monitor possible health effects.

The medical monitoring bill, S.37, has been a priority for Democratic lawmakers since 2016, when Bennington officials and residents learned of widespread drinking water contamination from chemicals known as PFOAs released by ChemFab, a local manufacturer of Teflon-coated fabrics.

But the legislation has faced resistance from business leaders and Republicans including Gov. Phil Scott, who vetoed a similar version of the bill last year, because of concerns from the business community.

The bill landed on Scott’s desk earlier this week, but the governor hasn’t signaled whether he will strike down the legislation again. He has until Monday to make a decision.

Both the House and the Senate passed the bill with large enough majorities to override a veto.

The bill passed in the House with 100 votes — exactly enough to override the governor’s veto pen. In the Senate, the proposal passed 19-11, falling one vote short of the 20 that would be needed to override a veto.

While last year’s bill applied to all companies, lawmakers narrowed the medical monitoring legislation this year to apply only to specific industries.

Businesses say that compliance with the new law would be burdensome and that it opens them up to liabilities that are broader than 16 other states with medical monitoring standards.

“It would create liability risks and impose costs that don’t currently exist for manufacturers in the state today and it could possibly create incentives for those manufacturers to consider … [moving] their facilities to other states,” Lisa Ventriss, the president of the Vermont Business Roundtable, a group of top Vermont CEOS, said at a news conference called by business leaders Friday.

Business leaders also say insurance costs for manufacturers will spike and will be difficult to obtain under the proposed law.

Chris Carrigan, the vice president of business development at the Vermont Chamber of Commerce, said the legislation would “disrupt the insurance markets and subject manufacturers to significant risks and costs.”

“Adding costs in return will place our manufacturers at a competitive disadvantage and may result in reactionary measures such as reduced investment in Vermont facilities,” Carrigan said.

Sen. Brian Campion, D-Bennington, who co-sponsored S.37, said he was disappointed that businesses don’t believe their employees need the protections provided in the bill.

He said that the legislation includes a provision for the state to monitor insurance rates, and that the Legislature could move to intervene if they went up dramatically.

“This whole thing about the end of the world, I just don’t buy it,” Campion said.

He stressed that the legislation’s aim is to hold companies accountable for public and employee exposure to chemicals.