Background from 2015 report:
“The modified permit allowed Evanite — and later H&V [Hollingsworth & Vose] — to discharge up to 98 tons of nitrogen oxide, 21 tons of carbon monoxide and 2.8 tons of gaseous fluorides each year at the south Corvallis site.

“No testing for those emissions was required or performed at the plant from the completion of the expansion in 1998 until late 2014, when DEQ instructed H&V to check actual emission levels of those substances as part of a permit renewal process. The tests showed the company was exceeding the limit for two of those pollutants, spewing out 457 tons of carbon monoxide and 7.6 tons of fluorides in 2014…”
Ref: H&V Fiber faces hefty DEQ fines, December 2015. 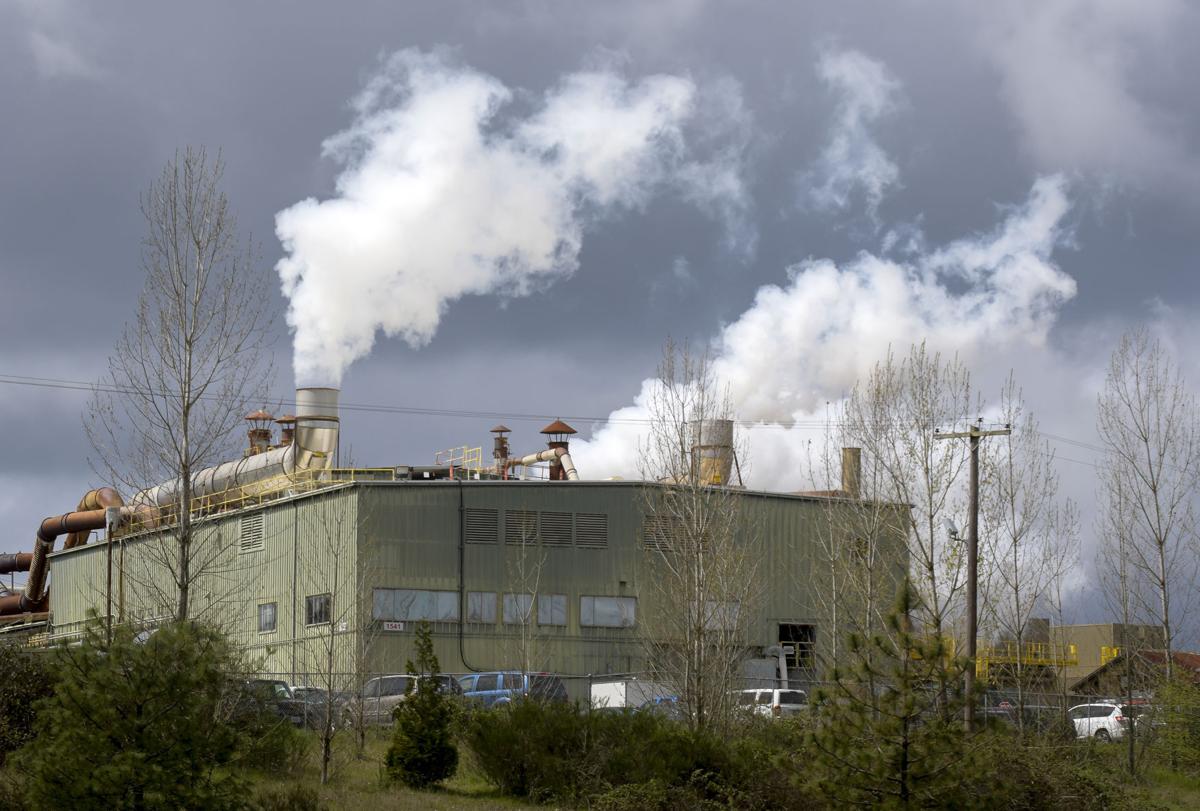 Steam plumes rise above the Hollingsworth & Vose glass fiber plant in south Corvallis. In the past, neighbors have expressed concerns about breathing glass fibers from the plant.

Dashing the hopes of environmentalists and neighbors of a glass fiber plant, Corvallis leaders backed a City Hall decision that may ultimately lead to a new and different air emissions discharge permit for the company.

Under the previous permit, the Department of Environmental Quality required Hollingsworth & Vose to pay $240,000 in fines and fees for over-emitting but allowed the company to keep operating its riverside facility, 1115 Crystal Lake Drive in south Corvallis, while it applied for a higher-level permit.

To clinch the new permit from the Oregon Department of Environmental Quality, the company first needed to get a statement from the city that its use of the land is compatible with the neighborhood

When first staff and then Corvallis City Manager Mark Shepard in 2021 determined that it was, a group appealed to the City Council, asking members to overrule Shepard’s decision upholding the prior staff decision and allow for public testimony.

On Monday, March 7, the City Council backed him in a 7-1 vote. The lone dissenting vote came from Councilor Hyatt Lytle.

Shepard declined to comment on the council decision, citing an appeal on the matter that was filed with the Oregon Land Use Board of Appeals prior to the council meeting.

In a statement prior to the council meeting, Hollingsworth & Vose Corvallis Site Manager Cindy Frost called the permit the company is seeking the “most stringent air permit” DEQ can issue for the plant, which she said employs 121 people.

Meanwhile, the company has upgraded over the years, adding emissions control equipment and ancillary site improvements which have led to significant reductions in particulate and fluoride emissions and wastewater discharge, according to Frost.

Following the meeting, Frost said in a statement that the new DEQ permit would set emissions levels and require testing, monitoring, and reporting to ensure compliance, and won’t authorize any expansion or change in operations.

Frost added the DEQ process itself will provide opportunity for written comment as well as a public hearing.

“We appreciate the city manager and City Council following the process and upholding the original determination on the (land use compatibility statement),” Frost said in the statement.

Speaking by phone Tuesday, Lytle said the Hollingsworth & Vose DEQ permit has been a hot topic with the council and constituents since she joined the council in 2017. She said the company has been transparent and committed to being a good neighbor.

However, she has concerns about the permit process as well as public health.

Lytle said a series of public meetings — in which residents voiced worries about regulatory failures and health impacts from inhaling glass particles and other harmful emissions from the plant’s smokestacks — left residents believing they would have the opportunity to speak as part of the request for a compatibility statement. They didn’t.

“My constituents felt their voices had been silenced,” she said, describing an avalanche of calls, text messages and emails she received on the subject while on vacation. The review was initially on the Feb. 22 meeting agenda but was tabled to allow for more preparation time.

While she doesn’t know if it would have affected the outcome, Lytle said she would have preferred the matter to have gone before the Planning Commission, to give the community an opportunity to speak on such a sensitive issue.

“There’s reference to the original 1995 (land use compatibility statement) that they did that. It should have gone through the development approval process.”

Leading into the discussion on Hollingsworth & Vose, councilors each gave statements about their ability to rule impartially. The appeal decision review, which is ministerial in nature, was focused exclusively on the record and barred the consideration of additional information, including personal contacts, emails and news coverage.

A ministerial decision is made in a prescribed manner without room for personal judgment calls.

Councilor Laurie Chaplen recused herself from the review based exposure to outside information. The remaining eight councilors and Mayor Biff Traber, who could be called to vote in the event of tie, pledged to work strictly from the record and act without bias, although most councilors mentioned receiving numerous emails on the subject.

Following the vote upholding Shepard’s decision, Lytle moved to begin reviewing the land development code to establish a process for land use compatibility statements. She said there isn’t a set-in-stone process or guidance, which has left the community unhappy about the lack of input opportunities. The council voted unanimously to begin the review.

“The current optics of the ministerial decision do not look favorable upon the city as an organization,” Lytle said. “Most of all, I am of the opinion that this process did not foster any trust.”

Councilor Jan Napack said there are significant health issues to consider regarding air quality and the compatibility statement approving a high-level DEQ permit in city limits without question.

“It’s a little bit disconcerting from my point of view,” she said. “Litigation isn’t going to solve anything at all; I think we really need to reset at this point.”

Jeremy Monroe, a member of the appellant group, said council wasn’t able to discuss the issue substantively and the deliberation criteria didn’t address whether Shepard’s decision was right or wrong. He said the appeal illustrates how critical errors were made in issuing the compatibility statement for Hollingsworth & Vose.

“This just wasn’t the fair hearing that we feel the issue and the community deserve,” Monroe said. “We are now evaluating appeal options that will allow for fair deliberations, which include circuit court and/or State Land Use Board of Appeals.”

The group is willing to participate, Monroe said, in reviewing the process for land use compatibility statements as well as any future DEQ hearings or other forums related to the Hollingsworth & Vose permit.

“We remain open to mediation options that could lead to the meaningful solutions for community health and safety that we outlined in our community letter,” Monroe said.

The group believes Hollingsworth & Vose betrayed the public trust when it was discovered in 2015 the plant had been operating under the wrong air type of emissions permit for nearly 20 years and had been emitting much higher levels of carbon monoxide and fluorides than allowed.

In its appeal, the group says the plant has remained out of compliance with state permits and local zoning since 2015, calling the permit application an attempt to legalize increased pollution after the fact. It also says the company should submit to a conditional use review process under the local land development code.

In a city document responding to the appeal, Shepard states when a landowner seeks a compatibility statement, local laws don’t require the city to consider past noncompliance. Staff’s role boils down to reviewing development code language, the zoning map and prior land use approvals to determine if the use is compatible with regulations, he states.

Public input, he added, would only be required under limited circumstances. He said staff had “properly” determined the correct course of action.

“While I understand the argument that Hollingsworth & Vose violated its prior DEQ permit, I see nothing in the (city’s land development code) that states this would trigger a conditional review by the city,” Shepard states in the document.

Cody Mann covers Benton County and the cities of Corvallis and Philomath.

— This is the second incident in Oregon where an industry did not report its fluoride emissions. The first issue was Intel in Hillsboro, Oregon, which emitted fluoride from its large manufacturing site since 1978 but never informed the state’s Department of Environmental Quality (DEQ) nor did the DEQ consider to ask -even though software manufacturing is a major source of fluorine entering the environment. See news report in The Oregonian, Intel has been emitting fluoride for years without state knowledge, permit, Sept 13, 2013.

— See chemicals from EPA’s Toxics Release Inventory reported by Hollingsworth & Vose from 1988 to 2009.