GE-Hitachi Global Laser Enrichment (GLE) and the US Department of Energy (DOE) have signed an amendment to their agreement for the sale of depleted uranium hexafluoride (UF6) inventories underpinning plans for a commercial laser enrichment facility at Paducah in Kentucky. Separately, the DOE has formalised how it plans to dispose of any waste depleted uranium oxides from its former gaseous diffusion enrichment plants. 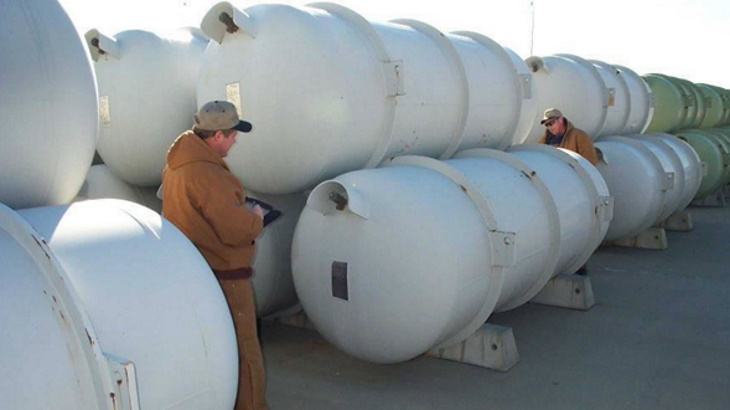 Cylinders filled with depleted UF6 are stored at the Paducah and Portsmouth sites (Image: DOE)

The amendment to the 2016 sales agreement brings it into alignment with current market conditions and is a key condition for an agreement between Australian company Silex Systems, Canadian company Cameco Corporation and GE-Hitachi Nuclear Energy for the restructure of GLE. Final US government approval for the restructure, which will result in Silex acquiring 51% of GLE and Cameco increasing its 24% share to 49%, is now expected by the end of this year.

GLE is the exclusive licensee of the SILEX (Separation of Isotopes by Laser EXcitation) uranium enrichment process and is working towards its commercialisation through a project that would involve construction of the Paducah Laser Enrichment Facility (PLEF) to re-enrich depleted UF6. The availability of DOE’s depleted UF6 inventories is critical to this, Silex said on 5 June. This material – also known as depleted uranium tails – is left over from previous enrichment operations and contains a lower proportion of fissile uranium-235 than naturally occurring uranium, but can potentially be re-enriched for use in nuclear fuel.

The agreement between GLE and DOE for the sale of the tails inventories was signed in 2016, at a time when a recovery in the uranium market was expected to begin, Silex said. The amendment ensures that the agreement will remain in effect long enough to allow GLE sufficient time to complete the project plan for the PLEF, which it expects to begin commercial operations in the late 2020s.

The tails re-enrichment project would continue over several decades, Silex said, and produce around 2000 tonnes each year of natural uranium in the form of UF6. This is equivalent to a mine producing an annual output of around 5.2 million pounds U3O8 (2000 tU). The output from PLEF would also have the added value of having already been converted into UF6.

“Preliminary economic analysis of the project indicates that it would rank as a large ‘Tier 1’ uranium mine by today’s standards with respect to the long life and low cost of production,” Silex said.

The DOE on 5 June issued a Record of Decision (ROD), which formalises its preference to dispose of depleted uranium oxide from its former gaseous diffusion plants in Portsmouth, Ohio and Paducah, Kentucky at one or more of three nominated locations: EnergySolutions LLC’s site near Clive, Utah; Waste Control Specialists LLC’s site near Andrews, Texas; and the Nevada National Security Site in Nye County, Nevada. The sites in Utah and Texas are commercial sites; the Nevada site is government-owned.

According to the DOE, there are 800,000 tonnes of depleted UF6 at the Portsmouth and Paducah sites. Plants to convert UF6 to the depleted uranium oxide, a more stable form for possible reuse or disposal, are now in operation at both sites.