home // News // Enrichment mechanisms for the co-occurrence of arsenic-fluoride-iodine in the groundwater in different sedimentary environments of the Hetao Basin, China //

Abnormal levels of co-occurring arsenic (As), fluoride (F–) and iodine (I) in groundwater at the Hetao Basin are geochemically unique. The abnormal distribution of As, F– and I is obviously related to the sedimentary environment. It is necessary to study the enrichment mechanisms for the co-occurrence of As, F– and I in groundwater under the influence of the sedimentary environment in Hetao Basin. In this study, 499 groundwater samples were collected. Sedimentary environments, hydrogeochemical process, isotopes were analyzed to elucidate their enrichment mechanisms. The environment of groundwater is weakly alkaline. The hydrochemical types of groundwater are mainly Na–Cl–HCO3. The distribution of isotope 18O demonstrates that irrigation from the Yellow River is the main recharge source. The main drainage channel is the discharge area in the Hetao basin. Based on the clay-sand ratio (R), the number of clay layers (N) and terrain slope (S), Hetao Basin was divided into four sedimentary environmental zones. The distribution of As (0–916.70 ug/L), F– (0.05–8.60 mg/L) and I (0.01–3.00 mg/L) was featured by a clear zonation of the sedimentary environment. The high As and high I groundwater were mainly distributed in the paleochannel zone of the Yellow River, with exceedance rates of 80.28% and 52.58%, and the median values of 73.91 ug/L and 0.11 mg/L, respectively. In the reducing environment, the release of As initially adsorbed on iron hydrogen and iron oxide, the reductive of iron hydroxide itself, rock weathering and evaporation are the key factors affecting the enrichment of As in groundwater. In this area, large amounts of aquatic organisms and plankton deposited in the sediment and channel filling deposits abundant with organic matter is the premise of high-I groundwater. The reduction of iodate and nitrate directly leads to the high concentration of I in groundwater. The high F– groundwater was mainly distributed in the piedmont alluvial-pluvial fan and the north margin of Ordos Plateau, with exceedance rates of 58.62% and 43.30%, and the median values of 1.10 mg/L and 0.86 mg/L, respectively. High F– groundwater in the two zones is affected by the abundant biotite and hornblende in Langshan Mountain and Ordos Plateau. Under evaporation, the precipitation rate of CaF2 and pH plays key roles in the enrichment of F– in groundwater. In the Hetao Basin, sedimentary environment is the main controlling factor for the co-mobilization of As, F– and I in groundwater. 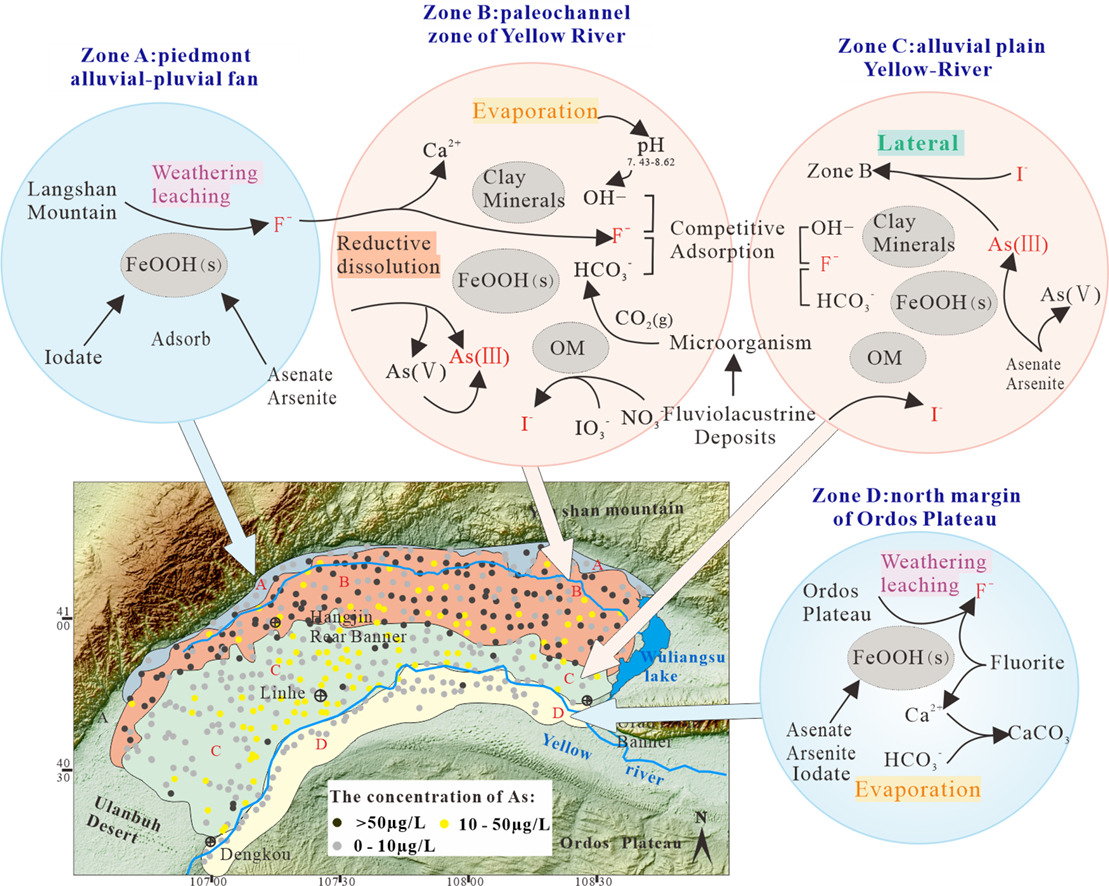