The supply of drinking water to the population is an important challenge facing humanity, since both surface and underground sources present a great variability of water storage with respect to space and time. This problem is further aggravated in arid and semi-arid areas where rainfall is low and torrential, which makes groundwater the main source of supply; therefore, it is necessary to carry out studies that allow evaluating the evolution of the quantity and quality of water. This study addresses the behavior of groundwater in a semi-arid region, considering the theory of flow systems to identify movement as well as water quality, es determined by a water quality index (WQI), calculated considering arsenic and fluorine. In addition, a quality irrigation classification is used, employing the norms in accordance with international standards and the Mexican Norm, which allows for a comparison. Local, regional, intermediate and mixed flow systems are identified, and the evolution of cations and anions in addition to temperature is examined. It is observed that the drinking water quality index classifies them as excellent in most of the monitored wells (<50), but with a negative evolution. Regarding irrigation, most of the water samples are classified without restriction for the establishment of any type II crop (C2S1) and with restrictions for horticultural crops. It is observed that arsenic had values between 0.49 and 61.40 (µg/L) in 2005, while in 2015 they were between 0.10 and 241.30 (µg/L). In addition, fluoride presented values between 0.00 and 2.6 (mg/L) in 2005, while in 2015 they were between 0.28 and 5.40 (mg/L). The correlations between arsenic and fluorine are noted as well as WQI and SAR. A finding in this research was to include arsenic and fluorine in the calculation of the WQI allowing a better interpretation of the quality of water for both human consumption and for agricultural use to based on this make the best decision to control any harmful effects for the population, in addition to identifying the appropriate purification treatment required to control pollutants. It is concluded that arsenic is an element of utmost importance when considering water quality, so it is necessary to examine its evolution and continue to monitor its levels constantly. View Full-Text 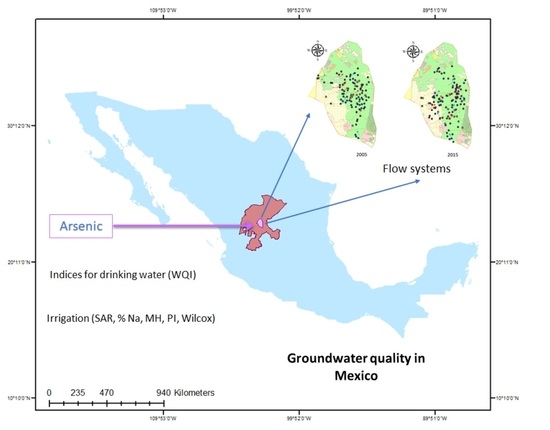