SANDY, Utah (KUTV) — The water is now safe to drink in Sandy, but the fallout over the lead contamination is only beginning. Residents have plenty of questions, and so do investigators.

The city council is expected to vote Tuesday to launch an investigation into the situation. Council chair Kris Nicholl said she hopes the public can help shape the scope. Central to her are the basics — who, what, when, where, why and how.

The investigation could be led by a combination of council members, residents and professionals, Nicholl said.

Marie Owens, who leads the Department of Environmental Quality’s Division of Drinking Water, said she’s “never seen a potential contamination event at this magnitude” in Utah in her 25 years in the water industry.

She said it’s unclear right now whether Sandy met the 24-hour requirement for notify the public of a problem.

“I’m sure we will find areas where we’ve all dropped the ball,” Owens said. “It was a hard ball to hold onto for several days.”

The problem began with fluoride on Feb. 8 and escalated a week later following lab results that showed way too much copper and lead in the water.

Jodi Monaco of Sandy sounded the alarm during public comment at Tuesday’s cit council meeting, days before the lab confirmed the issue. 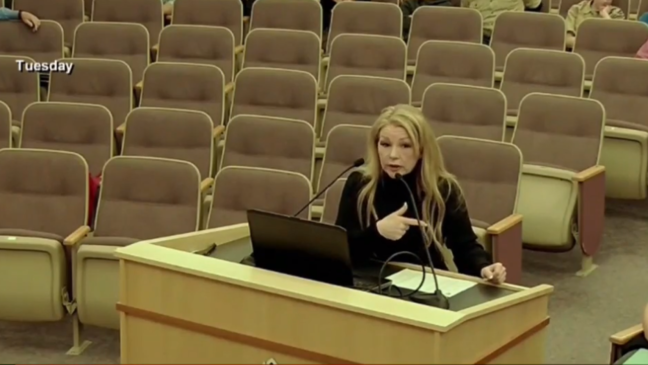 The water is now safe to drink in Sandy, but the fallout over the lead contamination is only beginning. Residents have plenty of questions, and so do investigators. (Photo: KUTV)

State water officials are now asking the city who was notified, when and how, and they’re still waiting on how much fluoride was in the water, along with results from samples taken from homes and a write-up of the initial problem. The city has said a storm caused a power outage that then caused a machine to add fluoride to the water even when no water was flowing.

“Our investigation is not over,” Owens said. “We are going to be taking samples for weeks and months, and we’ll be following up with Sandy and watching their system very closely with the water quality that they submit to us for years.”

About 600 homes were affected, according to the city. That’s up from initial estimates of about 50. Owens said her office and the city were in close communication.

Mayor Kurt Bradburn was not available for an interview on Monday afternoon but will be at a 7 p.m. town hall.