home // News // Fear Of Fluoridation Ignores Science And Common Sense //
Note from the Fluoride Action Network,
This Editorial is frustrating because the Editorial Board put its trust in the promoters of fluoridation. They did not take into account the following:
1. Fluoride is an endocrine disruptor (2nd paragraph; NAS, 2006).
2. Over 60 studies have reported an association of fluoride exposure with reduced IQ in children.
3. The 7 Mother-Offspring studies reveal that the fetus is the most vulnerable to fluoride’s neurotoxicity.
4. For healthy teeth there are safer and non-toxic alternatives to adding fluoride into our drinking water. See for example the Childsmile program.
(EC)

Our children have the highest prevalence of tooth decay in America. Citizens should demand that the Legislature mandate fluoride in the public water supply.

Two Saturday mornings ago about 100 kids and their parents turned out for free services at the Waikiki Health and Dental Clinic in the McCully-Moiliili area, in spite of blustery weather conditions.

The Give Kids A Smile event was the fifth in a row for the Hawaii Dental Association’s foundation and its Young Dentist Group, where dozens of volunteers help local kids get dental screenings, teeth cleanings and topical fluoride treatments.

The HDA, the state’s largest and oldest nonprofit of licensed and practicing dentists in Hawaii, sponsors the annual outreach to address an obvious concern: the dental health of our keiki.

But the HDA’s work is not limited to free clinics. It was also a leading advocate for a bill before the Hawaii Legislature this year that called for fluoridation of public water systems statewide.

The “Hawaii Smiles” report of 2015 from the Hawaii Department of Health found that Hawaii has the highest prevalence of tooth decay among third graders in the United States.

“For more than 70 years, the best available scientific evidence consistently indicates that community water fluoridation is safe and effective,” the HDA said in its testimony on Senate Bill 2997. “Fluoridation plays a protective role against dental decay throughout life, benefiting not only children but also adults.”

But the HDA along with other supporters of fluoridation — they include the state Department of Health, the Hawaii Public Health Institute and the Hawaii Medical Services Association — failed to persuade enough lawmakers to get the bill moving.

Fluoridation legislation had once again failed in Hawaii despite reams of evidence that it won’t harm people and a damning study from our own state that a lot of our kids have bad teeth.

At a Civil Cafe forum at the State Capitol last week, legislative leaders made clear that fluoridation lacks broad support among legislators.

“I’m not sure that the public is ready for mandatory fluoridation at this point,” said House Speaker Scott Saiki. “It’s something we’d really need to assess and move slow on. Even though we know what the benefits are. The alternative is to really focus on the programs that were at one time in public schools, fluoridation for younger students.”

But why? What is it that the Legislature needs to assess that isn’t already known?

Consider just the testimony of our own Department of Health in support of SB 2997:

“Community water fluoridation would be effective in improving the oral health of Hawaii’s residents. It is the single most effective measure a community can take to prevent tooth decay and specifically help with cavity prevention.

“Many research studies have proven the safety and benefits of fluoride. For 70 years, people in the United States have benefited from drinking water with fluoride, leading to better dental health. Community water fluoridation is recommended by nearly all public health, medical, and dental organizations.”

The authors of SB 2997 pointed to the CDC’s opinions, including this one: “Because of its contribution to the large decline in cavities in the United States since the 1960s, the CDC identified community water fluoridation as one of the 10 great public health achievements of the 20th century.”

But note the words “nearly all” in the DOH’s testimony regarding organizations that back fluoridation.

While there was no testimony in opposition that came from health and medical groups, the water supply boards of all four counties object strongly to fluoridation. The reasons range from cost to implementation challenges to possible health risks from overdosing on the stuff and subsequent liabilities for the counties. 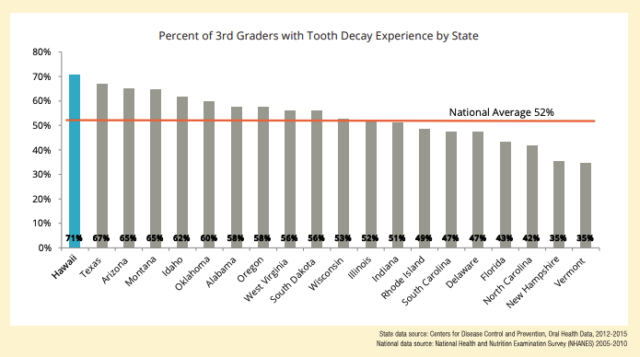 Hawaii County’s Department of Water Supply warned in its testimony that, according to the Environmental Protection Agency, long-term exposure to certain levels of fluoride could lead to bone disease, excessive tooth discoloration and pitting of teeth.

In the same sentence, however, the department allowed that it is “not a medical, dental, or health agency” and thus could not advise legislators in that regard.

Look hard enough and you will find some legitimate concerns about fluoride. But the World Health Organization and the American Academy of Pediatrics are among the organizations responding to those concerns and setting the record straight with facts and advice — in the case of the former, on balancing fluoride intake so it doesn’t harm tooth enamel or cause skeletal fluorosis, in the case of the latter critiquing a recent report raising worry over declines in the IQ of children.

Bottom line: The WHO and the American Academy of Pediatrics say fluoride is safe and recommend its use.

“The idea of purchasing and importing bottom dollar toxic sluff from a chemical company and introduce it to Hawaiis [sic] pristine water for the asinine reason of reducing cavities has come through the legislature before,” one person said in his written testimony. “I hope you find the clarity to oppose this foolish and potentially dangerous measure now and every time it rears its ugly head to poison our precious Hawaiian water.”

Sentiments like that recall the 1964 Stanley Kubrick classic “Dr. Strangelove,” in which a mad U.S. general warns about the dangers of fluoride in water.

“Do you realize that fluoridation is the most monstrously conceived and dangerous Communist plot we have ever had to face?” General Jack D. Ripper tells British Group Captain Lionel Mandrake before launching a nuclear war with the Soviet Union.

We understand that citizens might doubt the integrity of our institutions, and that there is resistance to unreasonable government mandates. But fluoridating drinking water to improve health is not a plot to undermine Hawaii society.

One wonders what a modern-day General Ripper might think of the fact that military bases in Hawaii add fluoride to water but only 11% of people in the state, according to the authors of SB 2997, have access to the benefits of fluoridated drinking water.

“This is lowest percentage of any state in the nation, and the corresponding national average is 75%,” the bill explains.

It’s probably too late to do anything in the 2020 session.

But when this issue comes up again — and it will, even as the teeth of many local folks continue to decay — here’s hoping our elected officials actually read the literature and make a common-sense policy decision that other states and municipalities made decades ago. Citizens — voters — should make sure they do.

The members of Civil Beat’s editorial board are Pierre Omidyar, Patti Epler, Jim Simon, Nathan Eagle, Chad Blair, John Hill and Jessica Terrell. Opinions expressed by the editorial board reflect the group’s consensus view. Chad Blair, the Politics and Opinion Editor, can be reached at cblair@civilbeat.org.