Pass out the nickel superalloy reactor kit, it’s time to tame that most reactive of elements

Our lives in the laboratory are seemingly defined by simple borosilicate glass. There are glass flasks, glass columns and glass condensers. It’s gorgeous: a brilliant and transparent material that feels good to the touch and allows you to see your reaction and enjoy its colours. High temperatures? No problem. Low pH? Not an issue. 50% sodium hydroxide solution? A typical flask will be fine below boiling temperatures.

But every material has a weakness, and for glass, it’s fluoride. I learned this lesson once when I decided to do a last-minute reaction with HF-pyridine. After adding the substrate and solvent to the flask, I added some HF-pyridine to a glass addition funnel and began dripping the reagent into the reaction. I noticed some odd fumes coming from the addition funnel, and reached my gloved hand into the hood. When I noticed the funnel was hot to the touch, I suddenly realised how dumb I had been. Happily, I was able to safely remove the addition funnel and pour the reagent into a plastic beaker and stop it from attacking the silicon in the glass. 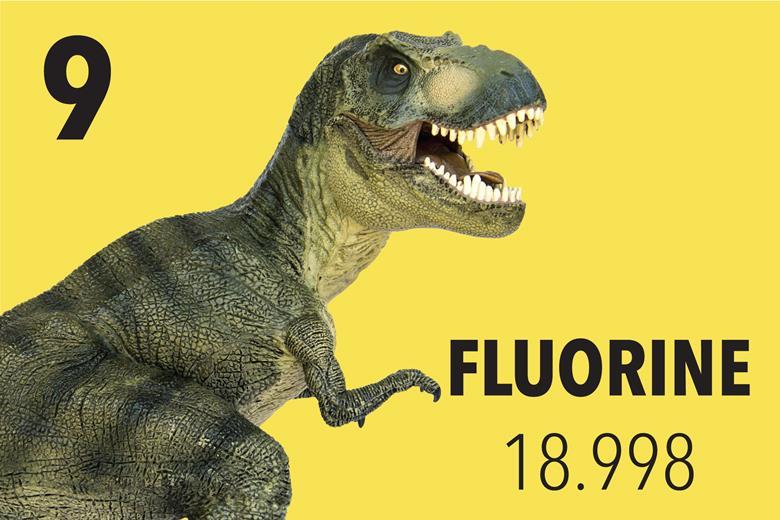 For lack of a better word, fluorine is weird. It’s very electronegative, giving it the nickname from a chemistry education film of my childhood: ‘the Tyrannosaurus rex of the periodic table’. And its atomic radius is small, similar to a hydrogen atom. It’s this interesting combination that tempts chemists to use fluorine in their research. To test the electronic environments of their targeted active sites, medicinal chemists will make fluorinated versions of their molecules to compare to a molecule that simply has a hydrogen in the same position. The strength of the carbon-fluorine bond is remarkable, and so medicinal compounds will often have a fluorine on the para-position of an aromatic ring to block the liver’s enzymes from metabolising drugs, thus extending the molecule’s half-life in the body. Its special electronic nature also attracts materials scientists: the highly inert, highly hydrophobic poly(tetrafluoroethene) and perfluorocarbon-based blood substitutes both owe their unique physical properties to fluorine’s unique electronics.

Fluorination is often done at specialist plants. For everyone else, it’s safer and easier to buy ready-fluorinated intermediates where possible

But getting fluorine into molecules is not straightforward. Aromatic rings with a chloride leaving group, and sufficiently electronegative substituents, will undergo halogen exchange with potassium fluoride at temperatures higher than 150°C. Don’t use your glass-lined reactors for this one, though. If you can find one, it’s a much better idea to use reactors made with nickel-based alloys like Monel 400 (67% Ni) or Inconel 600 (76% Ni).

The best solvents for this reaction are high-boiling and sufficiently polar to dissolve an ionic salt. In the lab, you’ll see dimethyl sulfoxide or dimethyl formamide being used for these reactions – but those solvents aren’t exactly the most welcome in the manufacturing plant. Once the reaction is done (and it will take a while), extracting the product can be tricky. But if you’ve added fluorine to your molecule, it’s likely the product’s boiling point will be lower than the starting material and you might just be able to distil it out of the mixture.

Don’t want to use ionic fluoride? There’s always the Balz–Schiemann reaction. Rather than displacing a chloride, you make a diazonium salt from an aniline, and use either fluoroboric acid or hydrofluoric acid itself to displace the diazonium. You’ll have to be very careful and have the reactor vent hooked to a scrubber. The nitrogen released provides a convenient route for volatile and toxic hydrofluoric acid to escape from the reactor. There are, of course, tens, if not hundreds of different fluorinating reagents. Diethylamino sulfur trifluoride (DAST) is probably the most well-known. Making geminal difluorides from ketones with DAST is simple, but the reagent is heat-sensitive and can explode above 50°C. Because of this, fluorination is often done at specialist plants that are well-suited to handling these reagents and their unique requirements. For everyone else, it’s safer and easier to buy ready-fluorinated intermediates where possible.

While fluorinated compounds are ubiquitous within pharma, it’s rare to see compounds that contain more than three or four fluorines. That’s easily surpassed by surfactants like perfluorooctanoic acid, with fifteen. Getting all those fluorines in place requires a different approach. The Simons electrochemical fluorination process uses electrochemistry, with octanoyl chloride as the starting material and hydrofluoric acid as the fluorine source, in specialised cells with with nickel electrodes. This powerful technique helped 3M manufacture enormous quantities of perfluorinated molecules, and enabled their use throughout our economy. Sadly, the strength of the carbon-fluorine bonds in such stubbornly non-biodegradable materials means that they persist in the environment. It will be chemistry’s role to help reverse the mistakes of the past and continue to harness fluorine’s remarkable qualities.