Note from the Fluoride Action Network:

Structural formula for Sulfoxaflor (see more information on its toxicity and USDA Shuts Down Data Collection on Honey Bees) and Sulfoxaflor: Documents. 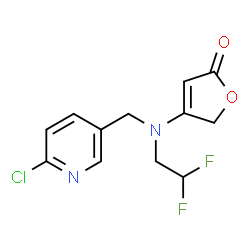 France has banned the insecticides, Bayer’s flupyradifurone and Corteva Agriscience’s sulfoxaflor (trade-marked as Isoclast). The government says that the two active ingredients have modes of action identical to neonicotinoids. It calls the ban part of its commitment to reducing the impact of the use of crop protection products on pollinators and ecosystems. The government declared its intention in September, following which, it initiated a public consultation.

The action has been taken under the country’s agriculture and food act, the États Généraux de l’Alimentation (called Egalim), which was promulgated in November 2018. The act has a provision for banning substances with the same mode of action as neonicotinoids. In the current state of knowledge, two substances meet this definition: sulfoxaflor and flupyradifurone, the government says.

In December, the French Administrative Court of Nice cancelled the approval for Corteva’s insecticides, Closer and Transform (both sulfoxaflor). The Court had already suspended the registration of the two products in November 2017, following their approval by the French food safety agency, the Anses, in October 2017 with strong restrictions on the conditions of use.

In September 2018, France banned five neonicotinoid insecticides: imidacloprid, clothianidin, thiamethoxam, thiacloprid and acetamiprid. At that time, the government indicated that it wanted to include the two ais in the ban.

Bayer and Corteva have said that the ban is in breach of the EU agrochemical Regulation 1107/2009. The companies have pointed out their respective ais are not identical to neonicotinoids. Bayer says that flupyradifurone is not a neonicotinoid and is classified by the Insecticide Resistance Action Committee (IRAC) as a new chemical subgroup, 4-D (butenolides). Corteva points out that sulfoxaflor is not a neonicotinoid but a substance belonging to the class sulfoximines.