Excessive use and mismanagement of groundwater are leading to its contamination by geogenic sources, posing a great threat to the ecosystem. There is an urgent need to draft and implement a roadmap for minimising the depletion of groundwater and mitigating water pollution. Educating farmers and the public at large about increasing food production while protecting the environment is desirable.

The quantum jump in agricultural production in the past several decades has impacted human and animal health, environmental safety and climate in various ways. One of the most important challenges facing humanity today is to conserve and sustain natural resources, including water, for increasing food production while protecting the environment. As the global population grows, stress on natural resources increases, making it difficult to maintain food security. In recent years, efforts have increasingly been focused on environmental pollution and its ill effects on human and animal health.

Groundwater quality depends upon geogenic and anthropogenic factors. There are naturally occurring minerals, which control the concentration of geogenic pollutants, such as arsenic, uranium, fluoride, boron and selenium in alluvial aquifers. However, naturally occurring pollutants such as selenium, fluoride, boron and arsenic in different regions do affect water quality for human and animal consumption. With the overdrafting and exploitation of groundwater from deep aquifers, the entry of these pollutants in the food chain is through the direct use of groundwater for drinking and/or irrigation purposes. 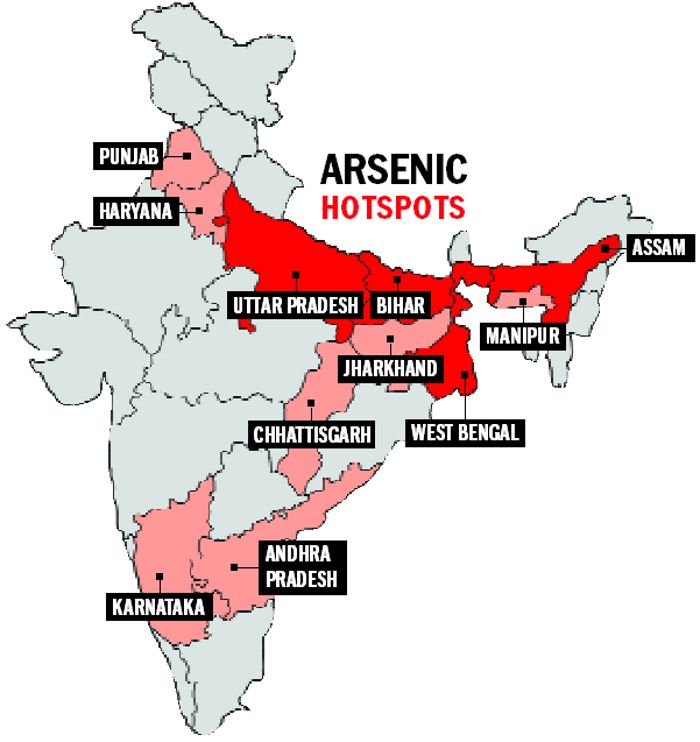 Studies suggest that regular monitoring of arsenic concentration in deep-tubewell waters by water-testing laboratories be done. Consumption of water with arsenic concentrations above the safe limit must be discouraged. In southwestern districts of Punjab, the use of canal water over groundwater is recommended after treatment for drinking purposes and domestic use by rural and urban populations.

In India, the average reported range of uranium in groundwater is from 0.01 to 19.6 µg/l. In Punjab, uranium content in groundwater ranges between 1.08 and 244 µg/l. The high values of uranium more than the permissible limit of 30 µg/l of the United States Environmental Protection Agency and 60 µg/l of the Atomic Energy Regulatory Board occur at scattered places. High concentration hotspots are more common in the south-west parts of Punjab, lying in Bathinda, Faridkot, Moga and Ferozepur districts. However, such spots also occur at other places like around Amritsar, where sample containing 45.5 µg/l of uranium was reported. Canal water has very negligible concentration of uranium and is safe in this regard.

Based on the total daily intake, the lowest fluoride concentration in drinking water that poses a risk of developing fluorosis is approximately 0.5 milligram per litre (mg/l) for dental fluorosis and 1.1 mg/l for skeletal fluorosis. The World Health Organisation (WHO) has given a guideline value of 1 mg/l for drinking water.

Boron is a constituent of practically all natural waters in concentrations varying from traces to tangible levels. It is essential for plant, animal and human growth, but is exceedingly toxic at concentrations only slightly above the optimum level.

A PAU investigation reported that boron concentration in irrigation water samples of 100 villages in five development blocks of Bathinda district ranged from negligible to 5.75 mg/l. Considering the maximum permissible limit of 2 mg/l, 37% samples in Rampura, 15% in Nathana, 29% in Mansa, 44% in Budhlada and 22% in Phul block were high in boron.

In Nawanshahr and Hoshiarpur districts, an area of about 1,000 hectares is affected by selenium toxicity. A PAU study determined the selenium quality of groundwater drawn from 90 tubewells located in this seleniferous region, which ranged between 0.25 and 69.5 µg/l with a mean of 4.7 µg/l. The maximum permissible limit of 10 µg/l for drinking purposes was exceeded by 11% of the tubewell water samples. Gypsum application resulted in substantial reduction in selenium content in wheat, maize, oats and sugarcane crops grown on such soils. Among tree species, poplar, eucalyptus, and mulberry have the potential for phyto-remediation of excessive selenium from the soil.

Summing it up, in northwestern states of India, excessive use and mismanagement of groundwater are leading to contamination of groundwater and water bodies from geogenic sources, posing a great threat to the ecosystem. There is an urgent need to draft and implement a roadmap for minimising the depletion of groundwater and mitigating water pollution. Educating farmers and public at large about increasing food production while protecting the environment, and about the consequences of pumping out polluted water for drinking and domestic purposes, is desirable.