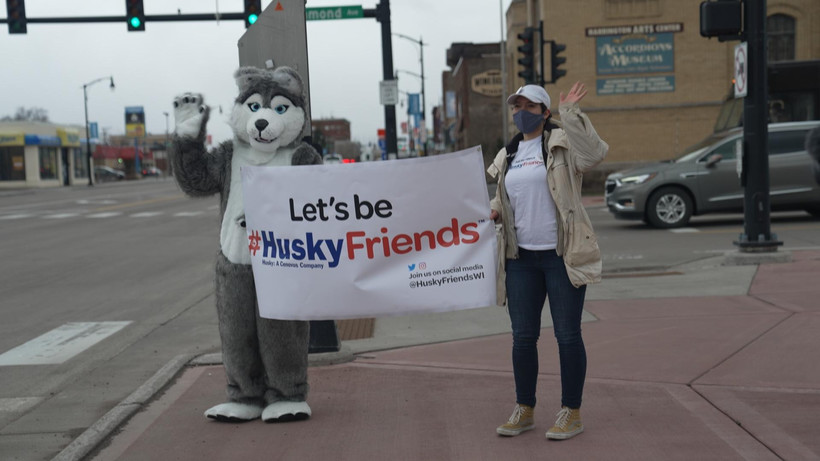 A group going by the name Modest Proposals posed as Husky Energy as it unveiled a fake public safety initiative on Tuesday, which marked four years since the Husky oil refinery explosion. Photo courtesy of Modest Proposals

A group portraying itself as Husky Energy rolled out a fake public safety initiative in Superior on the four-year anniversary of the Husky oil refinery explosion that injured dozens of people and forced many residents to temporarily evacuate.

One member of the group, which calls itself Modest Proposals, said it was an elaborate hoax to draw attention to the refinery’s plans to continue using a highly toxic chemical when it resumes operations next year.

The group posed as Husky, which was bought in a multi-billion dollar deal last year by Cenovus Energy Inc., as it unveiled an initiative called “Husky Friends.” Representing itself as the company in a news release, the group offered Duluth and Superior community members opportunities to sign up for safety alerts and learn more about hydrogen fluoride on a new website.

“Husky Friends is an accurate portrayal of the disregard that Husky and Cenovus have for the communities of Superior and Duluth,” said Jim Haugen, a member of the group and Twin Cities resident. “They’re basically telling hundreds of thousands of people to be OK with the fact that they’re putting their lives in danger for a few extra dollars.”

In a statement, a Cenovus spokesperson said Modest Proposals is in no way associated with Husky, Cenovus or the Superior refinery.

Prankster duo Andy Bichlbaum and Mike Bonanno started the Yes Men, which has since grown to train students in what they call “laughtivism.” On its website, the duo said it’s infiltrated press conferences and destroyed brands to expose wrongdoing.

But it was no joke when the explosion and fires at Wisconsin’s only oil refinery forced many of the city’s 27,000 residents to evacuate over fears of a hydrogen fluoride release.

A plume of darks smoke rises from the refinery fire in April 2018. Bob King/Duluth News Tribune

The highly toxic chemical is used in refining to make gasoline, but it can be hazardous to human health when released. While no hydrogen fluoride was spilled that day, Haugen said he learned of the issue through Duluth and Superior residents who were frustrated with the refinery’s plans to rebuild.

The group released a phony commercial, thousands of postcards and social media posts with its fake campaign. One tweet featured the group presenting the initiative to Superior Mayor Jim Paine.

Paine said people in the group, including a Husky mascot, identified themselves as members of the refinery, and the interaction sparked immediate red flags.

“I’m always skeptical about taking such a serious issue as public safety, or a crisis as large as the refinery fire, lightly or using satire to describe it, I think that’s not just crass, but it doesn’t allow us to actually reckon with the very real safety concerns that a refinery in a city can present,” said Paine.

Haugen said laughter can often reach people where advocacy fails. He pointed to the film “Don’t Look Up,” which has been called a biting satire of the climate crisis. He understands some may view the ruse as being in poor taste.

“I think that what Husky and Cenovus are doing is in extremely poor taste,” said Haugen.

Paine and Duluth Mayor Emily Larson called on the refinery to remove hydrogen fluoride from its operations in 2018. The next year, Husky announced it would continue using the chemical in its refining process. Paine said he’s disappointed in that decision.

Even so, he noted the refinery is taking steps to improve safety as part of its rebuild. Cenovus said Wednesday the project is now expected to cost $1.2 billion as part of releasing its first quarter earnings.

“(W)e continue to safely progress work toward a restart of the refinery,” Kim Guttormson, a Cenovus spokesperson, said.

As part of the project, Cenovus is investing in additional safety measures for its hydrogen fluoride alkylation unit. Those upgrades include seven remote-control water cannons, a reduction in the maximum onsite inventory of hydrogen fluoride, enhanced leak detection, and emergency isolation valves to limit any potential leak. The refinery is also investing in a rapid acid transfer system that can quickly transfer hydrogen fluoride to another holding tank in the event of a release.

Superior resident Austin Yadon hadn’t heard about the hoax, and he sees how it may send some people into hysterics.

“However, it is also still important to draw attention to safety,” said Yadon. “I think that the new management at the refinery is taking proper safety precautions and will continue to do so in the future.”

Kay McKenzie, who lives about a mile from the refinery, said the group’s prank seemed a “little twisted” but noted it got people’s attention. McKenzie said she’s worried about the refinery resuming operations next year, but she said most people have accepted the company and the roughly 200 jobs it provides year-round.

“I don’t know if they could change right now,” McKenzie said. “I think it’s a little late.”

Wisconsin Public Radio, © Copyright 2022, Board of Regents of the University of Wisconsin System and Wisconsin Educational Communications Board.