home // News // Have millions been taking antidepressants with harmful side-effects for decades – when there’s no scientific evidence they do what they claim? Some experts have suspected it for years. Now patients have been left reeling by a groundbreaking study //

Like millions of patients who seek help from their GPs for depression, Emma Ward was repeatedly told she was suffering from ‘an imbalance of chemicals in the brain’.

If Emma wanted to get better, her doctors said the 26-year-old should keep taking the antidepressants she had been prescribed since she was 15 — even though the drugs did not seem to improve her mood, and left her feeling perpetually numb emotionally.

Now, shocking new research published yesterday shows that the theory justifying the millions of prescriptions for antidepressants handed out every month to patients such as Emma, is simply not true.

The research confirms what some medical professionals have increasingly come to suspect. That the ‘chemical imbalance’ theory — that depression is due to a lack of the brain chemical serotonin — is nothing more than a myth.

This myth was created more than 35 years ago by pharmaceutical companies to justify their products, and has been perpetuated ever since by the training and practice of doctors around the world. In the most comprehensive review of the research on links between depression and serotonin ever carried out, researchers from the UK, Italy and Switzerland looked at 17 major international reviews that had documented the findings from more than 260 studies, involving 300,000 patients.

WHAT ARE THE NATURAL ALTERNATIVES?

Prescription drugs aren’t the only NHS-approved therapy available for depression. Increasingly, doctors are recommending other evidence-based solutions. They include:

Talking therapies: They’re available on NHS prescription throughout the UK and include everything from counselling to Cognitive Behavioural Therapy, which aims to change the way people think about a situation, and mindfulness.

Exercise classes: Studies show the benefit of exercise on mood. And GPs can now prescribe exercise for patients free or at a reduced cost. Whether it’s yoga, aerobics or something else will depend on what’s available in your area.

Walking: If you live in the Oxford, Gloucestershire, Wiltshire and Gwynedd areas, you’re likely to be prescribed a stroll to chase the blues away. NHS Forest runs guided and DIY walks along their ‘Green Health Routes’.

Gardening: Working in a green space helps us relax, so doctors now refer patients to work in community gardens. The Lambeth GP Food Co-op plants gardens in GP surgeries and hospitals and says these have helped people’s mental health.

Swimming: Whether it’s the local pool or the sea, getting in the water improves mood. The chillier the better — NHS anaesthetist Dr Mark Harper has helped set up Chill, which runs sessions around the UK to help people take advantage of the healing abilities of cold water.

Their findings, published in the journal Molecular Psychiatry, undermine the basis for decades of prescribing of the most commonly used antidepressants, Selective Serotonin Reuptake Inhibitors, or SSRIs.

‘For years, people have been led to believe that depression is caused by a chemical imbalance in the brain, due to a deficiency of the chemical serotonin,’ the lead researcher, Professor Joanna Moncrieff, a professor of psychiatry at University College London and a consultant psychiatrist at North East London NHS Foundation Trust, told the Mail.

‘We can safely say that after a vast amount of research conducted over several decades, there is no convincing evidence that depression is caused by serotonin abnormalities.’

Serotonin is a neurotransmitter, a chemical that transmits messages between nerve cells. The NHS website says that while ‘it would be too simplistic to say depression and related mental health conditions are caused by low serotonin levels . . . it is thought SSRIs work by increasing serotonin levels in the brain’.

The findings are a major upset, since SSRIs account for the majority of antidepressants prescribed in the UK, and millions of Britons rely on them.

Their use is rising inexorably — of the record 7.4 million antidepressant prescriptions issued in England in March alone, almost four million were SSRIs. The majority of patients prescribed antidepressants are women.

There are currently eight different SSRIs prescribed in the UK, among them fluoxetine, the mother of all SSRIs — better known as Prozac.

Fluoxetine was developed by U.S. pharmaceutical giant Eli Lilly in the early 1970s, based on ‘the hypothesis’ that boosting serotonin would help treat depression, and it soon became apparent that the company had struck gold.

According to a 2005 paper, by two of Fluoxetine’s inventors, ‘revenue from antidepressant sales was valued at less than $200 million in the first eight months of 1975’.

Prozac was approved for the treatment of depression in the U.S. in 1987, and by 2002 it had been prescribed to more than 40 million patients worldwide, with total sales of $22 billion.

‘Part of the reason why the story of chemical imbalances in depression has become so prevalent is because it was propagated by drug companies when they were marketing new antidepressants,’ says Dr Mark Horowitz, a co-author of the new study.

‘Antidepressants have been blockbuster drugs for the pharmaceutical industry, frequently ranking among their most profitable.’

But the theory is still taught at medical schools and in psychiatric textbooks. In its guidance on treating depression in adults, NICE says SSRIs ‘modify neuronal transmission in the brain’ — in other words, they work on serotonin levels.

Just a few weeks ago, during an interview on BBC Radio 4’s Woman’s Hour, Dr Nighat Arif, resident GP on both ITV’s This Morning programme and BBC Breakfast, was asked why she thought more women than men were being put on antidepressants. 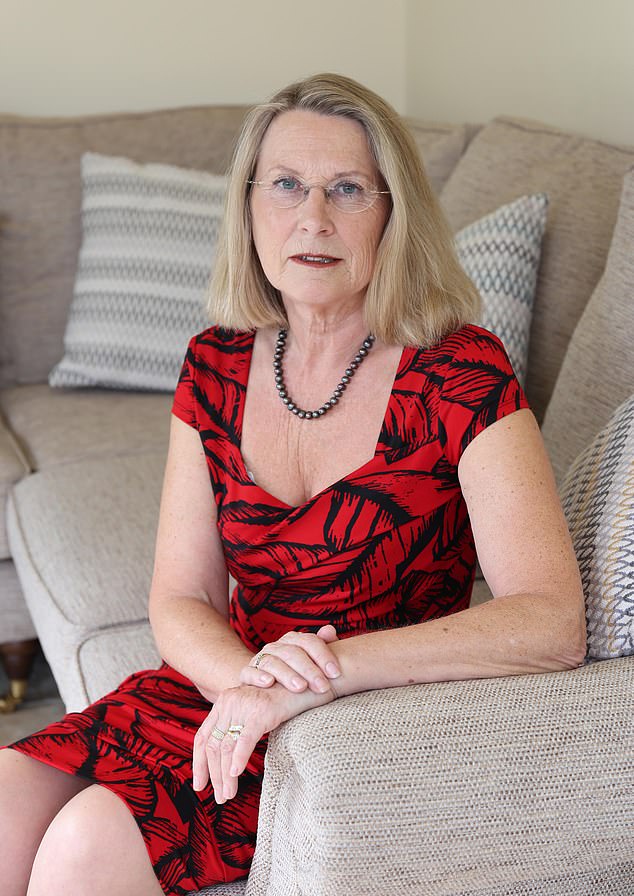 Women, she said, were not only more likely to ask for help, but also ‘understand that there is a chemical imbalance and antidepressants given at the right time will help with that imbalance’.

And yet ‘it has been suspected for some years that the evidence for this “brain imbalance” doesn’t stack up,’ says Professor Moncrieff. ‘But no one has got the evidence together and really looked at it properly.

‘However, now we have and it confirms that there is no convincing evidence that serotonin is linked with depression, and certainly not that low serotonin is a cause of depression.

‘We suggest it is time to acknowledge that the serotonin theory is not empirically substantiated.’

If the drugs don’t work by tackling a mythical ‘imbalance’, this could explain previous research which has found that SSRIs and other antidepressants are no better than a placebo for mild to moderate depression.

WITHOUT TAKING THESE DRUGS, I COULDN’T GET THROUGH THE DAY

Michele Cornely-Lewis, 49, is an exams invigilator. She lives with her husband and daughter, 14, in Broxbourne, Herts, She says:

Nearly 20 years ago my father died suddenly and I was plunged into deep grief and was suicidal. For six months I struggled on, but needed professional help.

When I saw my GP I sobbed for what seemed like an hour. He agreed I was severely depressed. He signed me off work for two weeks, started me on 20 mg fluoxetine and suggested I do more exercise and eat healthily.

Within two weeks it felt like the fog I’d been wading through was lifting. I believe it was the antidepressants that enabled me to cope.

Years later I weaned myself off them as I didn’t think it was healthy to be on antidepressants for life. And for a while I felt better. But then my daughter was born with a heart condition. She nearly died several times and I lost my hair with the stress. I felt myself going into a dark hole and was calling in sick.

I knew what was happening and went to my GP, who prescribed the same antidepressant. But this time he said that I shouldn’t put pressure on myself to come off them again. I could take them for life — so that’s what I do.

I don’t have any desire to stop, despite the story about their effectiveness. The fact they work for me is what’s important. I have no side-effects and will take them for as long as I need.