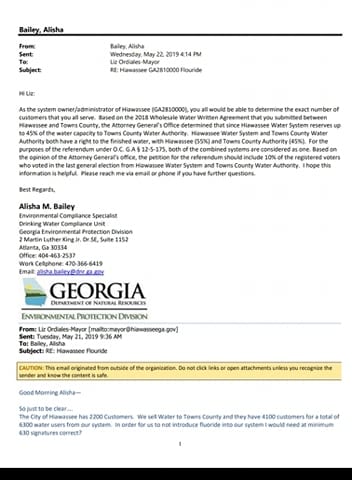 HIAWASSEE, Ga. – In recent weeks, FYN investigated and reported details leading to the exclusion of Towns County voters’ ability to weigh-in on the upcoming City of Hiawassee fluoride referendum on the May 19 ballot. Towns County citizens, who expected to have a say as to whether fluoride would be added to the local water supply, did not take the news in stride, publicly voicing stark opposition to the controversial additive.

Hiawassee Mayor Liz Ordiales responded to the upset in a press release, stating that the City of Hiawassee was unaware that the signatures of both city and county voters were needed on last year’s petition to secure a ballot referendum for the full scope of water consumers to decide. “All parties were under the impression that all water users, City and County, were to be included in the vote. We are now being told that since the signatures were for the City jurisdiction, that only the City voters would have the opportunity to vote on this matter,” Ordiales stated in part on March 7.

FYN’s investigation has proven otherwise. Based on documents received, Mayor Ordiales was made aware by state authorities, in addition to the local elections board, that county voters would be exempt from participating in the fluoride referendum without the required, petitioned signatures of county citizens.

Following information gathered from Corbin McLain — a county activist who stated that she gathered only city signatures per instruction from Mayor Ordiales in late-August/early-September of 2019 — FYN filed an open records request with the Georgia Environmental Protection Division (EPD) to review copies of correspondence exchanged between the mayor and the state agency.

A mere 35 signatures were ultimately collected, however, solely from the City of Hiawassee voter base despite Mayor Ordiales’ knowledge that 10-percent of county voters’ signatures were necessary to include all city water consumers in the controversial vote. 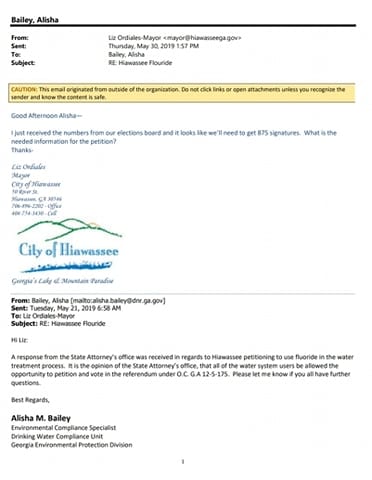 An email exchanged between Hiawassee Mayor Liz Ordiales and the EPD.

“I just received the numbers from our elections board and it looks like we’ll need to get 875 signatures. What is the needed information for the petition?.” Mayor Ordiales asked the EPD in an email dated May 30, 2019, solidifying the fact that Ordiales was well-aware of the mandated stipulations.

Several Hiawassee City Council members, in addition to Towns County Commissioner Cliff Bradshaw, expressed shock in learning that county voters would not be involved in the potential addition of fluoride, a decision that will affect water consumers beyond Hiawassee’s city limits.