home // News // Hydrogeochemical and isotopic controls on the source of fluoride in groundwater within the Vea catchment, northeastern Ghana //

Groundwater consumption is considered as a major exposure route to fluoride in humans. Therefore, this study unraveled the sources and sinks of groundwater fluoride in the Vea catchment of northeastern Ghana using an integration of litho-petrography, hydrogeochemical analysis, multivariate statistical analysis, and stable isotope analysis. In this regard, 70 groundwater samples were collected from boreholes and analyzed for major ions and stable isotopes using standard procedures whilst 10 rock samples were collected from the crystalline basement rocks of the Birimian Supergroup and used for the petrographic studies. The petrographic results revealed the dominance of quartz, microcline, plagioclase (albite), biotite, muscovite and hornblende in the lithological units. The order of dominance of fluoride in the various lithologies is K-feldspar-rich granitoid > hornblende-biotite granitoid > basaltic flow > hornblende-biotite tonalite > hornblende biotite granodiorite > biotite granitoid. The groundwater fluoride concentrations varied from 0.35 to 3.95 mg/L with a mean concentration of 1.68 mg/L. Almost 61% of the samples have fluoride concentrations above the World Health Organization’s maximum permissible limit of 1.5 mg/L. Groundwater is supersaturated with respect to albite due to silicate weathering and undersaturated with respect to fluorite and calcite. This enhanced ion exchange and fluoride mobilization in the groundwater from progressive calcite precipitation. The fluoride concentrations show positive correlations with Na+, Mg2+, HCO3?, and SO42?, confirming that fluoride enrichment is due to silicate weathering and ion exchange reactions. The ?18O and ?2H values with respect to V-SMOW vary between ?4.15 and ?2.75‰ and ?22.49 and ?13.74‰, respectively suggesting considerable isotopic variation of the groundwater. Enriched isotopic composition is observed with low fluoride concentration whilst depleted isotopic composition is observed with a higher concentration of fluoride in groundwater. The stable isotopic compositions of the groundwater also indicated meteoric origin with an evaporative effect, which partly influences the groundwater chemistry. 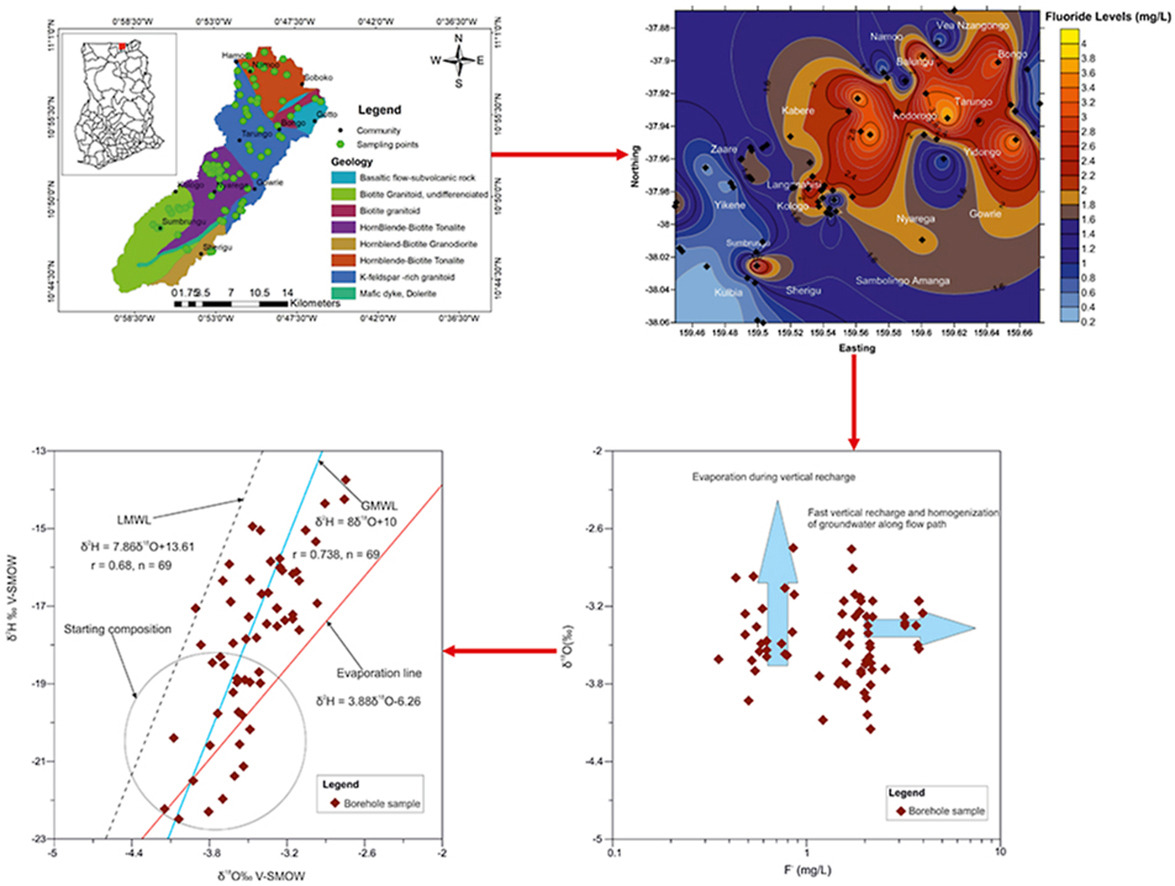