Groundwater contaminated with fluoride is affecting the health of people in villages, especially the elderly and children, even as awareness on fluorosis is low in rural areas and the government remains apathetic 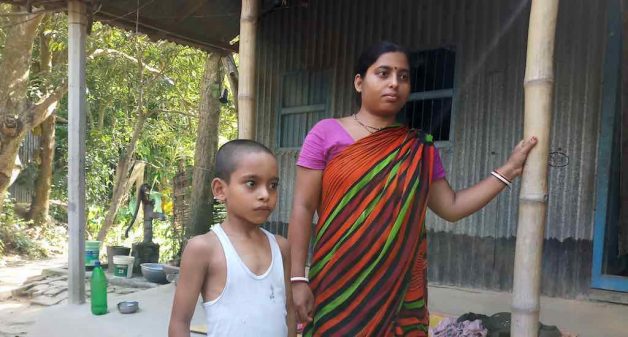 Snehasish already shows symptoms of fluorosis at the age of eight, as groundwater is the only source of drinking water for the village (Photo by Gurvinder Singh)

Anirban Sarkar often complains of toothache and pain in his joints. The 10-year-old studies in a government school at Bikoir Kapalipara village in Gangarampur administrative block of Dakshin Dinajpur district. He fails to understand the reason behind the pain. His parents dismiss it as a childhood ailment that would get cured once he grows up.

Anirban is not alone. His classmate Arpita Sarkar (13) suffers from similar ailment and sometimes does not attend school when the pain is extreme. Over 90% of children in Anirban’s school have discolored teeth and complain of pain in joints.

Villagers jokingly attribute it to excessive consumption of sweets and warn the children to stay away from confectionaries. The villagers are not aware that their children are suffering from fluorosis, a disease characterized by mottling of teeth and skeletal deformities in extreme cases.

“We need fluoride intake of 0.6 mg per liter, but anything above that level is harmful,” said Sukumar Dey, Chief Medical Officer of Dakshin Dinajpur. “When rainfall infiltrates through rocks that contain fluoride-bearing minerals such as apatite, fluorite, biotite and hornblende, fluoride concentration in ground water increases.” It could also be due to anthropogenic reasons.

The disease occurs due to high intake of fluoride through water and food. Dakshin Dinajpur is the worst hit district in West Bengal, with hundreds of people in five blocks, namely, Gangarampur, Banshihari, Kumarganj, Tapan and Kushmandi, suffering from fluorosis. This is not surprising, as the fluoride level in the ground water of the district is beyond permissible limit.

Gangarampur is the worst affected block of the district, with at least one member of every household having symptoms of the disease. Gangarampur administration’s laboratory tested the ground water last year and found that the fluoride level was 2.2 mg per liter, much beyond the permissible limit of 1 mg per liter.

Villagers claim that they know nothing about the ailment since there were no awareness programs. “Our children suffer from periodic pains in limbs and have discoloration of teeth, but we dismissed it as trivial,” Chandana Sarkar (38), a homemaker whose only son Snehasish (8) has started showing symptoms of the disease, told VillageSqaure.in.

According to Dey, dental fluorosis is common among children. “In a study done in two high schools in Nandanpur and Jahangirpur panchayats, we found that 97% of the students were affected by dental fluorosis,” he said. “The older generation suffers from skeletal fluorosis, but there are no statistics.”

Kamal Biswas (18) can hardly walk as he is suffering from advanced stage of skeletal fluorosis. The illness has robbed him off his education. “He was a bright student and scored well in school but the ailment has snatched his childhood,” said Bakul Chandra Biswas (50), Kamal’s father.

Kamal Biswas quit school after Class V since he could not walk. He can barely stand nowadays. “The village doesn’t have a health center and we don’t have the means to take him to Malda city for treatment,” said Bakul Biswas. “He often complains of pain in his joints but I am helpless and I don’t know what lies in future for him.”

But what makes fluorosis adverse is the lack of awareness among people and the casual approach of the state government. “Days are not far when the state government would have to take serious measures like it did with arsenic contamination, to tackle fluorosis,” said Raju Biswas, secretary of the West Bengal chapter of Indian Dental Association.

According to Biswas, most of the children in North Bengal suffer from fluorosis, as people still lack awareness about oral hygiene and hence fail to understand the consequences of fluorosis. “We give supplements to prevent the ailment from spreading further, but there has to be more intensive efforts,” he said.

“The disease is deadlier than arsenic but it’s shocking that people are not aware of it,” said Tuhin Subhra Mandal, a government school teacher in Balurghat, about 30 km from Gangarampur. “They dismiss it as a petty ailment because it takes times for the effects to manifest.”

The apathy of the administration could be gauged by the fact that the water treatment plant installed in Kadihat Belbari High School of Gangarampur has been defunct. “It has not been functioning for the past several months and nobody from the administration has come to check it,” said an employee of the school. “We have no alternative but to drink the contaminated water.”

Mandal, through Dishari Sankolpo, a non-governmental organization working on environmental issues, has been trying to create awareness about fluorosis. “We educate children and also the parents, about timely treatment,” said Mandal.

Groundwater, extracted from tube wells, is the only source of drinking water. Villagers, complain that most of the government projects are only on paper. “Though it will take time to see the impact of our awareness programs, people have started demanding the administration for purified water,” said Mandal.

Dey said that the fluoride level is seven times more than permissible limit. “We distribute calcium tablets to the poor to deal with the disease as it leads to severe skeletal deformity,” he said. “The Public Health Engineering department is working on a project of nearly Rs 300 crore to provide potable water to the villagers, but it would take another two years for the work to be completed.”

Gurvinder Singh is a journalist based in Kolkata. Views are personal.