US company Kairos Power has submitted the preliminary safety analysis report (PSAR) for its fluoride salt-cooled, high-temperature reactor (KP-FHR) to the US Nuclear Regulatory Commission (NRC) as part of its application for a construction permit for the Hermes low-power demonstration reactor, which is to be built in Oak Ridge, Tennessee. 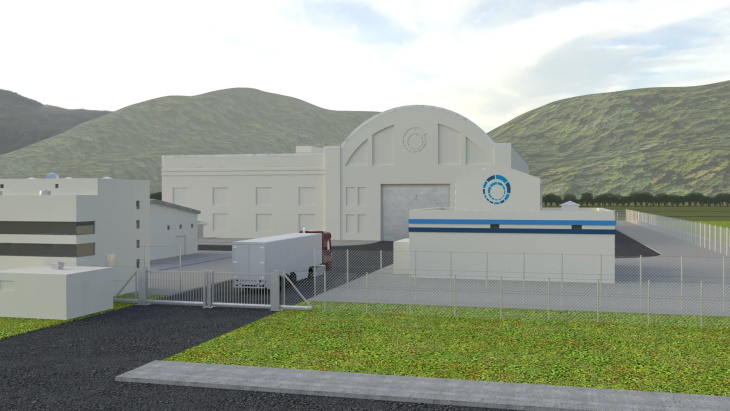 A rendering of the Hermes demonstration plant at Oak Ridge (Image: Kairos Power)

The KP-FHR is described by Alameda, California-headquartered Kairos as a novel advanced reactor technology that leverages TRISO fuel in pebble form combined with a low-pressure fluoride salt coolant. The Hermes unit, designed to achieve a thermal power level of 35 MWt, will not generate electricity but will demonstrate the technology’s capability to deliver low-cost nuclear heat and is part of a “rapid iterative development” approach which the company says will help to mitigate technical, licensing, manufacturing and construction risk while establishing cost certainty on the pathway to commercial deployment of the KP-FHR. It is aiming for Hermes to be operational in 2026.

“It is both thrilling and humbling to embark on this new phase of development and demonstration for the technology on which our company is singularly focused,” said Kairos Power CEO and co-founder Mike Laufer. “We look forward to working with the NRC staff, State of Tennessee and City of Oak Ridge to build Hermes, demonstrating our ability to deliver safe and affordable nuclear heat.”

Kairos is a recipient of a US Department of Energy Advanced Reactor Demonstration Program cost-shared award for risk reduction funding to support development of the Hermes reactor, worth USD629 million over seven years of which the DOE’s share is USD303 million. The company is partnering with Materion Corporation, Oak Ridge National Laboratory, Idaho National Laboratory, and the Electric Power Research Institute, and has has also established a cooperative development agreement with the Tennessee Valley Authority to collaborate on the development and demonstration for Hermes.

Kairos is one of seven non-light water reactor designers that have formally notified the NRC of their intent to engage in regulatory interactions, the others being General Atomics for the Energy Multiplier Module; X-Energy for the XE-100; TerraPower and GE Hitachi for the Natrium reactor; TerraPower for its Molten Chloride Fast Reactor; Westinghouse Electric Company for its eVinci micro reactor; and Terrestrial Energy USA for its Integral Molten Salt Reactor.

The company has also established an interactive virtual open house to share information about the project and the technology.