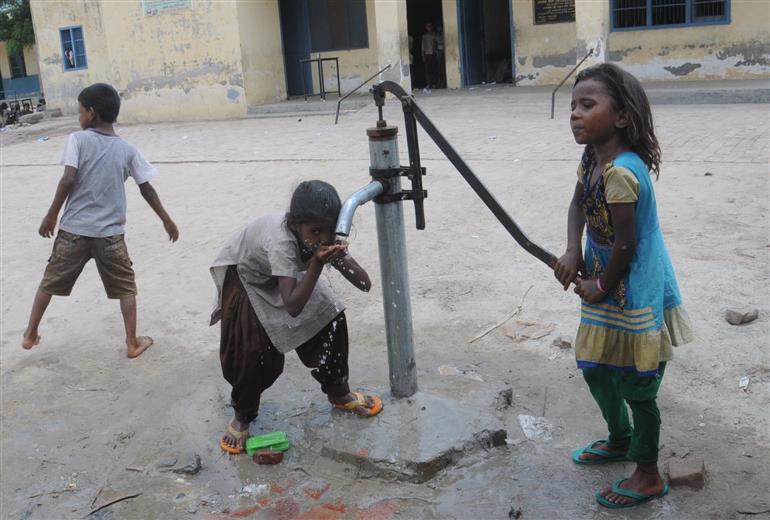 Children drink water from a handpump in Bathinda. – File photo

Eighty per cent of groundwater in the Malwa region is unfit for drinking and irrigation. Although, there is no exact figure in any recent study, but all experts are unanimous that the chemical contamination of the groundwater is posing a great health risk to the people living there and it is also putting children at risk of a blood disorder.

We are monitoring the water quality in seven districts. Some areas have high content of uranium, some have fluoride. Prof Dr VK Garg, Central University of Punjab, Bathinda

The quality of the groundwater is quite bad due to which people suffer from teeth and bone problems in the region. Seshandeep Kaur, sarpanch, Manik Khana village

A study of 2018, which was commissioned by the Centre’s Department of Science and Technology, had found concentration of calcium, magnesium, sodium, nitrate and flourine higher than the permissible limits, rendering 80.3 per cent groundwater of Malwa unsuitable for drinking.

Prof Dr VK Garg, Dean, School of Environment And Earth Sciences, Central University of Punjab, Bathinda, said, “We are monitoring the water quality in seven districts of the region and we have found that some areas have more content of uranium, and some have high content of fluoride or other heavy metals in the groundwater.”

Prof Dr Bhupinder Singh Virk of Punjabi University in his study on “The Problem of Drinking Water in the Malwa region of Punjab” has stated that Punjab, a pioneer of green revolution today, is facing an acute problem of drinking water due to water pollution.

He said, “During the study, it has come to light that there are different factors responsible for the problem. In Bathinda, we found fly ash of thermal plants, pesticides, weedicides, chemical fertilisers used by farmers, untreated water discharged by industries in seasonal rivulets of this area”.

He said, “In Mansa, we found a canal which carried the industrial waste water from the adjoining state of Haryana and polluted water of adjoining villages and towns. Besides, the village common ponds are used as sewage tanks in most villages of the area. Moreover, they had reported that the small industries in every district are disposing untreated/polluted industrial waste into borewells or nearby drains.”

According to a study by a team of experts of Guru Nanak Dev University, Amritsar, it is a matter of concern that the polluted groundwater used for drinking, domestic and irrigation purposes is making children vulnerable to both carcinogenic and non-carcinogenic risks, more than adults in Bathinda and Faridkot.

Health activist Dr Vitull K Gupta said several studies over the years have documented that groundwater in the Malwa region is unfit for drinking and irrigation because of elevated levels of alkalinity, hardness, fluoride, uranium, nitrate, magnesium, phosphates and several contents of pesticides and fertilisers.

More importantly, the carcinogenic risk of arsenic and chromium was the highest in Bathinda district.

Over 1,800 RO plants were installed in the state during 2009 and thereafter by the then SAD-BJP government, including 1,075 in Malwa, but now in many villages, these ROs are lying defunct for the past few years.