home // News // No evidence that turmeric removes fluoride from the brain //
Note from Fluoride Action Network:
This is stated in the article below: “Recent research has also found that exposure to fluoride in pregnancy is associated with poor cognitive development, but those findings have been disputed.” It’s unfortunate that the source for the dispute is the American Council on Science and Health, an industry-friendly non-profit that goes after anything that can possibly harm industry’s pocketbook. (EC)

A Facebook meme claims that turmeric, a commonly used spice, removes a toxin from the brain.

“Curcumin, found in turmeric, appears to raise endogenous glutathione production in the brain, a major antioxidant defence system,” it reads. 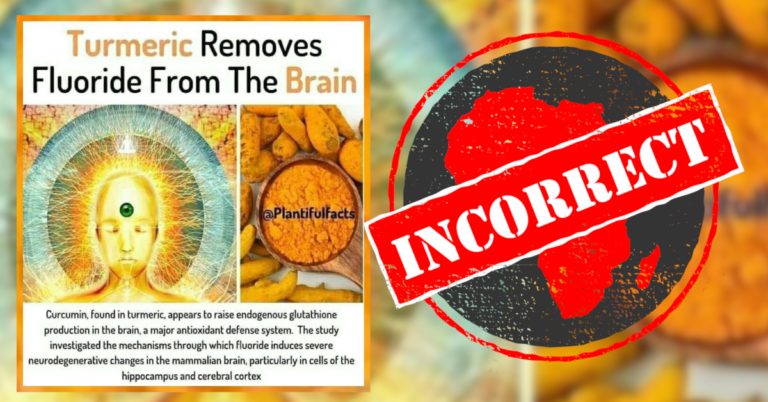 “The study investigated the mechanisms through which fluoride induces severe neurodegenerative changes in the mammalian brain particularly in the cells of the hippocampus and the cerebral cortex.”

We checked if there was any truth to this claim.

‘Not supported by evidence’

Turmeric (scientific name Curcuma longa) is a plant in the ginger family. Its rhizome or underground stem is used to produce spices and dyes.

Excess fluoride in water affects the development of bones and teeth, according to the World Health Organization. Recent research has also found that exposure to fluoride in pregnancy is associated with poor cognitive development, but those findings have been disputed.

Africa Check asked Dr Philippe Grandjean, an adjunct professor of public health at the Harvard TH Chan School of Public Health, whose research includes brain development and fluoride exposure, whether there was any truth to the claim.

Grandjean told us there was no evidence that curcumin removes fluoride from the brain.

“The mechanism proposed is very specific but appears unlikely and is not supported by evidence,” Grandjean said. – Vincent Ng’ethe