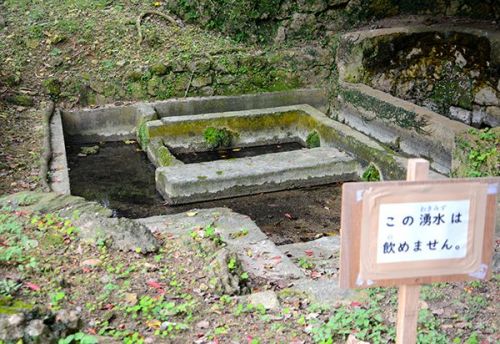 Shiriiga (pictured above) in Yara, Kadena Town, photographed on April 23, where high concentrations of PFOS and PFOA were detected. Local residents once used this water for everyday needs like washing the laundry.

On April 23 it came to light that a water quality study conducted last year by the Okinawa Prefectural Enterprise Bureau in the vicinity of Kadena Air Base detected high concentrations of perfluorooctane sulfonate (PFOS) and perfluorooctanoic acid (PFOA), which are possible carcinogens, in the spring water near the Hija River intake pump.

This is the first time the Enterprise Bureau has conducted a study of the spring water around Kadena Air Base. The Bureau states that simply touching the water will not have an effect, but advises against drinking it.

Experts have indicated that these results further heighten the possibility that the water contamination originated from the base.

The Enterprise Bureau has informed the Okinawa Prefectural Department of Environmental Affairs and the Kadena Town government of the study results. On April 19, Kadena Town set up three billboards alerting residents about the spring water.

Director Masami Kawamura of the Informed-Public Project (IPP) acquired the water quality study materials from the Enterprise Bureau by requesting disclosure of information.

As part of water quality monitoring, the Bureau has been periodically surveying the areas around some intake pumps since 2014. Starting in April last year the Bureau found a rising concentration of PFOS at the Nagata River intake pump, northwest of the Hija River pump, so it then began studying Hija River’s water and groundwater in that vicinity.

In a study of nine areas of spring and river water surrounding the Hija River intake pump, with testing conducted between May 28 and July 30 on seven occasions last year, the Bureau detected concentrations of PFOS/PFOA of over 1000 nanograms per liter (1000ng/L) at six places including Shiriiga and Ubuga.

PFOS/PFOA have been identified as possible carcinogens.

Although Japan has no domestic environmental standard concerning these chemicals, in the United States the Lifetime Health Advisory Level (HAL) for these chemicals in drinking water is set at 70ng/L.

Professor Yutaka Tashiro of Meio University, who is well-aquainted with environmental studies, said that this data reflects the composition of the groundwater and soil, as well as the state of the environment.

As this is the first study of these circumstances throughout the area to the north and northwest of Kadena Air Base, Professor Tashiro said: “There is a wider scope of groundwater contamination around the base than previously known, and it may be run-off from the base.”

In January this year the Prefectural Environmental Preservation Division also conducted a water quality study of the same site.

The results of the Division’s study, made public on April 23, showed that PFOS/PFOA concentrations of 2100ng/L were detected in Ubuga, and 2000ng/L in the groundwater of Mizugama, Kadena Town.