Rock Springs has discontinued using fluoride in its water system.

According to the meeting minutes from the April 20 utility board meeting and a May newsletter on the village’s website, Rock Springs decided to remove the chemical from its water after the pump to dispense the chemical into the water was not working properly.

Village Board of Utility Duane Stieve, who also serves as a village board member, mainly referred to the meeting minutes from the village board of utility’s April 20 meeting when asked why the village decided to remove fluoride from its water.

“I have no comment on that; you can get the meeting minutes and get all that information off there,” Stieve said. 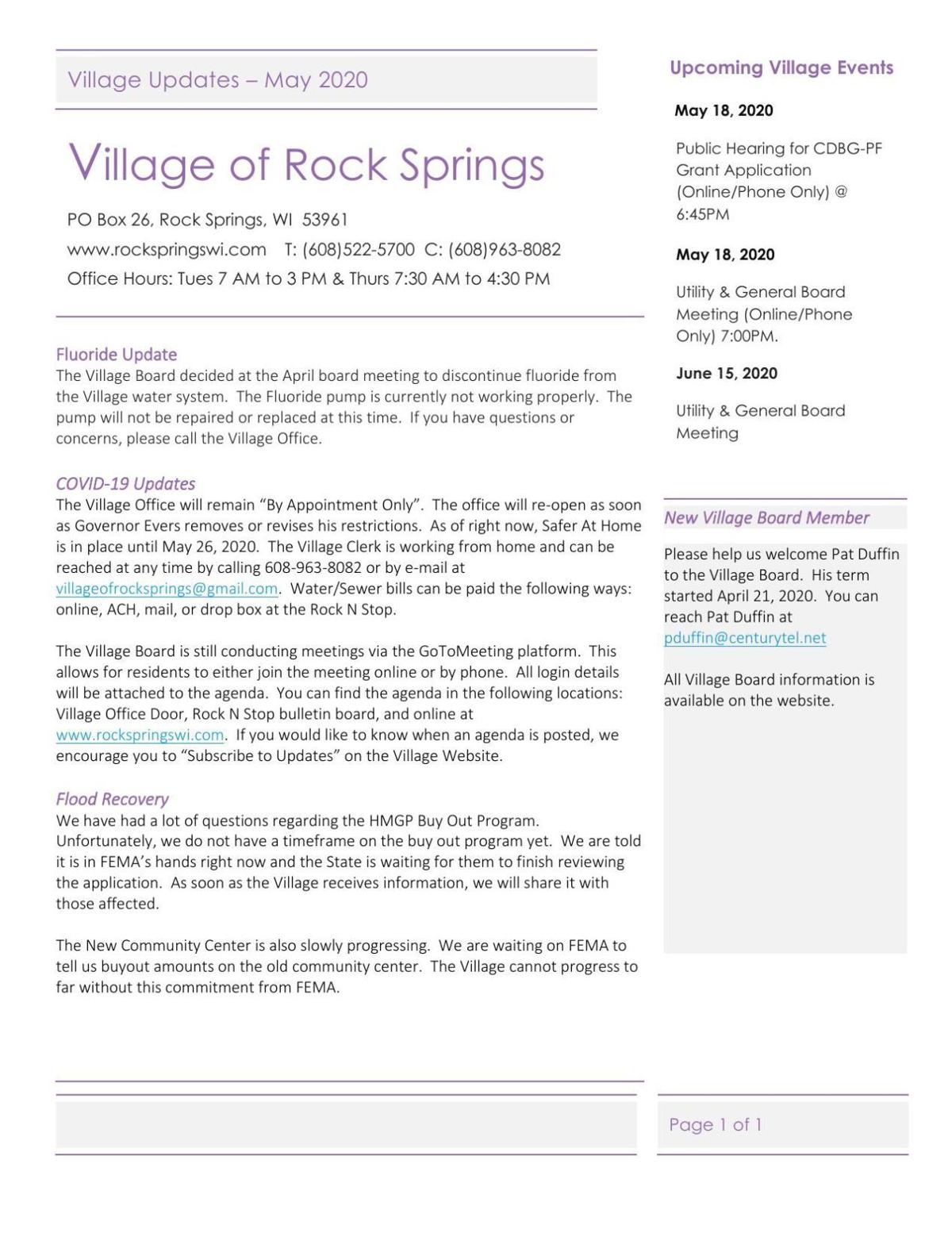 According to minutes from the April 20 utility board meeting, the pump was not functioning as it should. The motion was made to discontinue the use of fluoride in the water system and the motion was carried. The minutes stated a letter would be sent to residents in their next bill to notify them of the changes. Village Clerk/Treasurer Jennifer Roloff said all residents have been notified about the changes to the water system and there haven’t been any complaints or concerns, according to Roloff.

When asked for more details on why the pump was not working properly, if it was dispensing too little or too much fluoride, all Stieve said was,”the pump was shot, not working.”

Stieve and Roloff said the village has had conversations years ago about whether or not to remove the chemical from its water system. Roloff said the village conducted a survey years ago asking residents if Rock Springs should keep its water fluoridated and results came back at about 50/50 to remove or keep it at the time. She didn’t know when the survey took place because it was before she starting working for Rock Springs.

“I don’t know when that was because that was before my time,” she said. “That was (at least) ten years ago. I’ve been working with the village for 10 years, so it had to be before that.”

Stieve believes those prior conversations, along with the pump not working properly and other communities deciding to end the practice is why the village decided to remove the substance from its water. He added the pump would also have to be fixed every two to three years with it breaking down.

In February, Lake Delton decided to discontinue using fluoride in its water system.

Wisconsin Department of Natural Resources Director of Bureau and Drinking Water Steven Elmore said Wisconsin does not require communities to fluoridate its water systems and there aren’t any federal requirements.

“It is a local decision on whether or not to add fluoride,” Elmore said. “Our department does not require that systems fluoridate, but if they do, they have to meet the requirements of our rules.”

“Those two regulations are so that we can protect the health of people,” Elmore said. “We do recognize that fluoride has benefits to teeth and dental benefits but too much fluoride can be a bad thing, so we make sure they stay below levels that would be harmful.”

According to the Center for Disease Control website, fluoride in water has shown to reduce tooth decay and have dental benefits. In 2016, more than 200 million people or 73% of the US population, were served by community water systems that contain enough fluoride to protect their teeth, according to the CDC website.

While fluoridation in water systems has been a nationwide practice for more than 70 years, a lawsuit, Food & Water Watch, Inc., vs. Environmental Protection Agency has sought to end the practice due to health concerns of too much exposure to the chemical. Stieve said the lawsuit didn’t have anything to do with Rock Spring’s decision to discontinue using fluoride from its water system.