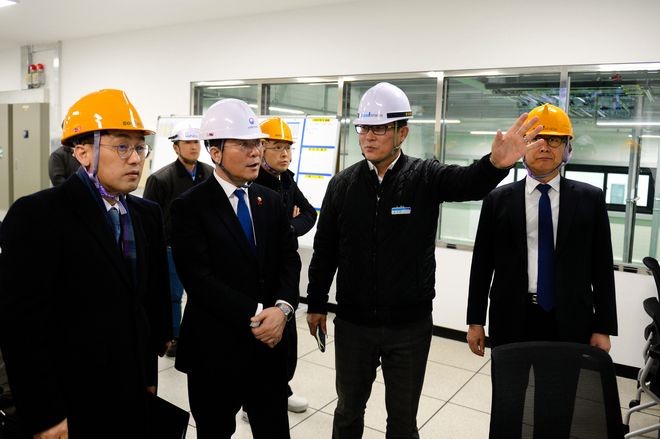 SEOUL–Tokyo’s decision to tighten exports of sensitive materials used to produce semiconductors may have had a silver lining for South Korea after all.

Enraged by the policy, South Korea’s private sector went all-out to become self-sufficient in an area that Japan asserted was an issue with national security implications.

Successive South Korean administrations were seemingly content to rely on Japan for material procurement in the manufacturing industry, but that ended last July after Japan implemented tighter export restrictions.

Since then, South Korean companies worked feverishly to counter the Japanese export restrictions, and their efforts are quickly coming to fruition.

Super high-purity hydrogen fluoride is among three high-tech materials subject to stricter control measures by Tokyo. The substance is essential in the manufacture of the latest semiconductors, and Japanese enterprises have been dominating the global market.

According to media reports here, a South Korean chemical maker called Soulbrain announced it has paved the way to produce a large volume of hydrogen fluoride that could cover the bulk of domestic demand.

During a visit to the company, South Korean Trade Minister Sung Yun-mo expressed his view that “we have turned an unfavorable situation into a golden opportunity.”

Semiconductor production is a core industry in South Korea that accounts for 20 percent of the country’s exports.

Alarm bells rang in Seoul when Tokyo announced the clampdown on exports.

Semiconductor manufacturing requires that the purity of hydrogen fluoride be kept at 99.9999999999 percent. It was said that only Japan was able to achieve this level on a stable basis.

South Korea moved swiftly to counter the Japanese decision. The government announced a program last August to “improve the competitiveness of materials, parts and equipment.”

Under the strategy, 20 goods, including the three materials, as well as 80 items imported from Japan are expected to be replaced with domestically manufactured ones or those from other countries within one and five years, respectively, at an annual cost of 1 trillion won (94 billion yen, or $860 million).

After the national program was announced, large corporations promptly waged aggressive efforts to lessen the country’s reliance on Japan.

According to one industry insider, Samsung Electronics Co. identified 220 materials and components as part of the strategy of seeking non-Japanese suppliers under the “Japan-free” policy.

South Korea at one time implemented a program to domestically produce the high-tech substances, but the attempt fell flat. Over a period of 19 years, it invested 5.4 trillion won in the project.

Asked how South Korea was suddenly able to achieve that goal in such a short time, the source explained it was simply a matter of pouring more resources into the project.

“The profitability of materials and parts is relatively low, so everyone used to think it was sufficient to secure them from Japan as it’s so close,” the source added. “But this time around, both the government and industry took the matter far more seriously.”

The past failure is partially due to an unwillingness among large enterprises to allow small and midsize businesses to use their manufacturing facilities to test and evaluate materials and parts under development.

“But now, many large businesses are opening their production facilities (to smaller firms),” the insider said.

The lack of access to Japan prompted South Korea to move speedily to approach other suppliers. On Jan. 8, U.S. chemical conglomerate DuPont announced plans to build a plant manufacturing to produce a sensitized material called “resist” that is applied to semiconductor substrate and is one of the three regulated materials in South Korea.

Sung, the trade minister, welcomed the Japanese economy ministry’s decision in mid-December to partly relax the export restrictions on resist, but made clear South Korea will continue working to find other sources of supply. It sent a clear message that Seoul has no intention of changing course.

Addressing public-private efforts in South Korea to replace Japan as a source for the materials, a Japanese industry insider said it was too early to jump to conclusions.

“The move is intended in large part to appeal to South Korean national sentiment,” said the Japanese insider.

“The efforts will only be called successful after large South Korean companies are able to mass-produce the materials. How things turn out still remains unclear.”

A South Korean government source who tracks the two countries’ economic activity noted that South Korea is moving quickly to shed its dependence on Japan-made products.