According to materials from Korea Customs Service, the percentage of hydrogen fluoride imported from China increased greatly from July to October.

Some within the industry are saying that Chinese companies that have now seized the leadership of key semiconductor raw materials cannot be overlooked as well even though South Korean semiconductor companies have somewhat withstood against Japan’s export restrictions by replacing Japanese suppliers with Chinese suppliers. 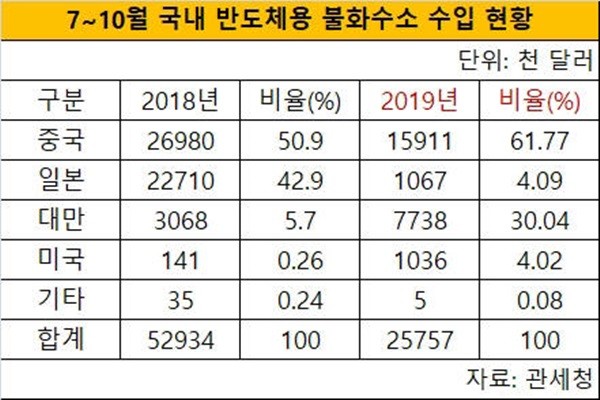 <Amount and ratio of hydrogen fluoride imported per country between July and October of 2018 and 2019 (Reference: Korea Customs Service)>

“Although South Korean semiconductor companies have been able to lessen their dependence, Japan’s export restrictions have become an opportunity for Chinese companies to realize their strength and possible impact that they can have on the semiconductor market.” said a high-ranking official from a semiconductor material manufacturer.