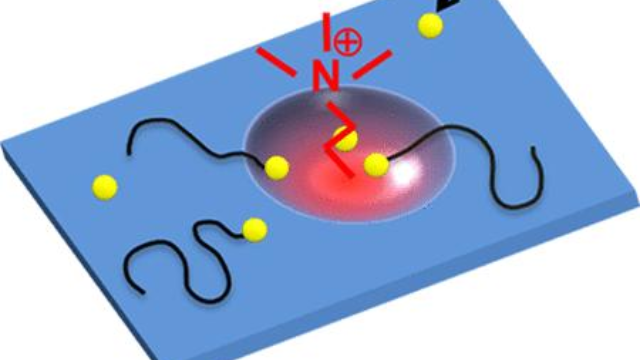 Sarin is a man-made nerve agent that can spread as a gas or liquid. According to the Center for Disease control, exposure to large doses will over-stimulate glands and muscles, and can lead to loss of consciousness or respiratory failure. Even small doses can cause a long list of distressing and dangerous symptoms.

“Low-level nerve agent exposure leads to ambiguous signs and symptoms that cannot be easily discriminated from other conditions, which may result in a delay in treatment and permanent damage,” said Paul Braun, professor of materials science and engineering, and director of the Illinois Materials Research Laboratory. “If trace amounts can be detected quickly, you can prevent permanent damage to human health.”

“There are sophisticated sensors available, but they are large and expensive, and thus some individuals may be exposed to sarin without knowing it, and that’s too late,” he said. “Current miniature sensors only shown the presence of a toxin, not the amount of exposure.” Existing small sensors also may not be sufficiently sensitive to provide adequate protection.

The technology established in this new paper built on previous work from the Braun group, which had developed “chemical black holes” on a small hydrogel surfaces that drew molecules toward a point sensor via a chemical potential gradient.

“The problem was that the molecules moved too slowly,” said Braun. “It would take an hour to a day to move molecules a centimeter, and we didn’t have a great way to do quantitative detection.”

However, the chemical black hole technique proved that the science behind a chemical gradient would work, and the next step was to figure out a “detection technique that could make a real impact.”

Knowing that they needed something smaller than slow-moving molecules, the researchers exposed a safe version of a sarin-like molecule to the enzyme DFPase, causing the molecule to undergo hydrolysis, and break up into several parts. One of these parts was a negatively charged fluoride ion.

“The fluoride ion is easy to detect electrochemically,” said Mohammad Amdad Ali, a postdoctoral researcher in Braun’s group, and first author on the paper. “And, because it is so small, it moves much more quickly than a molecule. If we have a surface with positively charged gradient focusing a point in the center of the sensor that really likes (attracts the fluoride ion), instead of taking hours, it takes only minutes for all the fluoride ions to end up at one point.”

“The fluoride ion specific electrochemical sensor has a low detection threshold, and thus can detect a very low level of fluoride ions,” said Ali. “With the current state of our prototype sensor, we could detect aerosol deposited sarin-like molecule from a vapor concentration as low as 0.01 mg/m3 within 10 min,” he added.

The next step is to test the sensors in an environment that is set up to handle the actual nerve agent.

“The ultimate goal is to manufacture something small enough, like a postage stamp, that may be worn on a uniform to detect gas or can be removed to test a surface that within minutes will tell if the agent is present and how much of the agent is there,” said Braun.

“It is not going to tell you about all toxins, but it will tell you about a limited set of compounds very quickly,” he said. “If you find out that sarin is present, you have a much better chance of getting the proper antidote.”

This article has been republished from materials provided by the University of Illinois at Urbana-Champaign – College of Engineering. Note: material may have been edited for length and content. For further information, please contact the cited source.