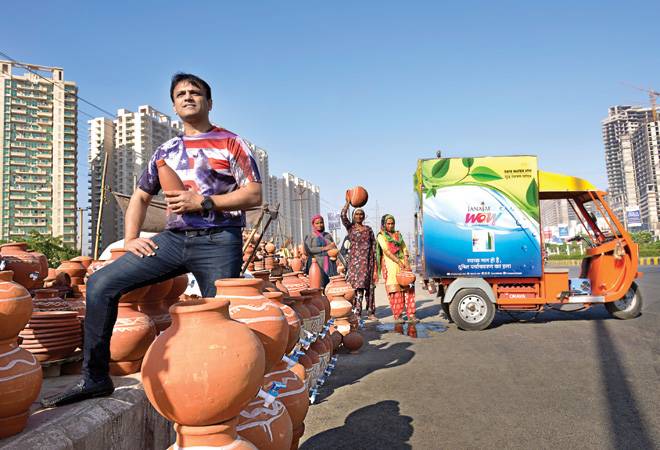 Life is tough for residents of the 1,800 unauthorised colonies scattered across Delhi as they do not have access to piped water supply. In these areas, there is no sewerage also due to lack of legal property ownership and transfer rights. But of late, people in these colonies have got access to clean drinking water round-the-clock through automated dispensing units. Popularly known as water ATMs, these machines dot slum clusters in Narela, Batla House, Dwarka, Savda Ghevra and Kirti Nagar, among other locations, and have been one of the major factors behind the improved health of the residents.

Similarly, in Assam’s Nalbari district, where high levels of arsenic and fluoride in groundwater have led to a rise in cancer cases, water ATMs are a boon, much like in north Karnataka, where groundwater contaminated with nitrates can now be made potable through community purification systems.

Water ATMs are now mushrooming rapidly in a country where more than 163 million people do not have access to clean water. And since the government has not been able to provide access to potable water for these people, the mantle has been taken up by social enterprises and corporate social responsibility arms of India Inc.

“There is a need for a decentralised model for last mile delivery of safe drinking water at affordable prices. Local water problems need to be solved and this is achieved through community water ATMs,” says Anuj Sharma, CEO of Piramal Sarvajal, a social enterprise seeded by the Piramal Foundation in 2008.

Tata Trusts set up the water purification system in Nalbari, operated it for 15 months and handed it over to the locals. Decentralisation and localisation is the essence of community water ATMs. “The local community has to take ownership of water ATMs. The model has to be viable at the village level and then people can take it up as a self-sustainable enterprise,” says Divyang Waghela, Head (Tata Water Mission) at Tata Trusts, which has set up over 150 ATMs so far, mostly in Karnataka, Andhra Pradesh and Telangana.

Partnerships have been crucial in driving penetration of water ATMs. Both Sarvajal and Tata Trusts have forged tie-ups with local bodies like Delhi Jal Board and Bhubaneswar Municipal Corporation to set up ATMs, besides setting up units in areas identified by various companies.

Similarly, Jaldhaara Foundation has a tie-up with WaterHealth India, which provides the technology as well as dispensers for community water purification systems. “We started when need for safe water was indicated by small urban local bodies in Karnataka. So we wanted to find a donor and approached Tata Trusts,” says Madhu Krishnamoorthy, Head, Jaldhaara Foundation, which has 100 units through 12 partnerships so far.

Waghela says companies have already developed technologies, and with the support of government and like-minded organisations, the model can be taken to other geographies. “We are planning to look at arsenic and fluoride affected areas and partnerships help in scaling faster and better,” he says.

Since the level and type of water contamination as well as water demand vary, there is no one-size-fits-all approach for putting up water ATMs. In a village of 1,000 families, where the panchayat provides room to set up the system and there is a water source nearby, the cost of the purification machine (backend) and dispenser (ATM) ranges from Rs  5 lakh to Rs  6 lakh, depending on the technology needed.

However, every ATM does not need to have a purification unit attached to it. In urban slums, a hub and spoke model works where one purification machine can be used to fill 10 ATMs in a 10-km vicinity using mobile water vans. “These ATMs have to be sturdier and so the capex goes up to Rs  40 lakh to serve 10,000 families,” says Sharma. In most mid-sized towns, water franchises are being taken up by entrepreneurs. “We are trying to make this loan worthy. The idea is that once you unlock the loan model, it will spread much faster,” he adds.

Operating expenses per ATM range between Rs  20,000 and Rs  25,000 per month, including the operator’s salary. “They require continued operational investments. Since water is contaminated, membranes get corroded quickly and filters need to be replaced frequently,” says Parag Agarwal, founder and CMD at JanaJal.

Besides, there is the cost of electricity, water to be purified and managing residual water, especially when using reverse osmosis (RO) technology. With conventional RO, 65 per cent of the water gets wasted. Water ATMs are using newer technology to recover up to 60 per cent product water, minimising waste.

In the ATMs installed by IRCTC, for example, residual water is used for cleaning and sanitation purposes. Jaldhaara is using soak pits so that this water seeps into aquifers. “It is a one-time upfront cost or you become environmentally non-compliant. We prefer to make the maximum use of water,” says Krishnamoorthy.

Most enterprises are also opting for solar or hybrid solutions to power water ATMs to bring down costs. Sarvajal’s ATMs are solar powered while JalaJal, which is one of the partners of IRCTC, uses the hybrid model. “At many places, like railway stations, it is not feasible to use only solar power, which works best in open community systems. So we use a hybrid model,” says Agarwal.

Due to direct consumer interface, these companies have created an electronic medium to monitor ATMs. “Our water ATMs are remotely monitored from a central control centre for water quality, quantity and collection of revenue. It is done through a cloud-based IT system,” says Sharma.

Regular users are provided an RFID card on which money is loaded; one-time users can use coins. Seven slums in Delhi with about 20,000 families have Sarvajal ATMs. “Of that, 10,000 families have our cards and one-fourth of the population is using it on a daily basis. Users can get cards recharged from the operator who runs purification machines and fills the ATMs,” Sharma adds.

Pricing of water varies from location to location depending on the cost of purification and availability of grant from companies. Most water ATMs charge 25-30 paise per litre or Rs  5 for 20 litres.

IRCTC, however, has decided on a rate of Rs  5 per litre for five years, after which it will revise the price. “The cost is higher for chilled water,” says Agarwal, who points out that extremely low pricing makes water ATMs unviable unless supported by huge volumes.

Sharma, however, believes water is a human right and also one of the utilities like power. “Nobody expects a power plant to break even in 15 to 20 years. So this is also new and will take time. We are here to create new technologies to take water to the last mile and not worry about making profits,” he adds.

For most purification plants, the capex is provided by a donor company, without which they will not be viable. “They must be put up in a place with at least 1,500-1,600 direct beneficiaries. It will be viable if the consumption is three litres per person per day in peak summer,” explains Krishnamoorthy.

That explains why some of these ATMs are lying abandoned. “Many companies prefer to indulge in CSR activities around their manufacturing or warehousing facilities. But there may not enough demand or need for potable water in such locations. So these ATMs are not viable,” says Agarwal. To that extent, CSR practices have to evolve and fund the right projects where people need services. “CSR has to be sustainable CSR to make community water purification systems a true success,” says Agarwal.

However, for the residents of Delhi’s unauthorised colonies, water ATMs have solved one of their biggest problems.