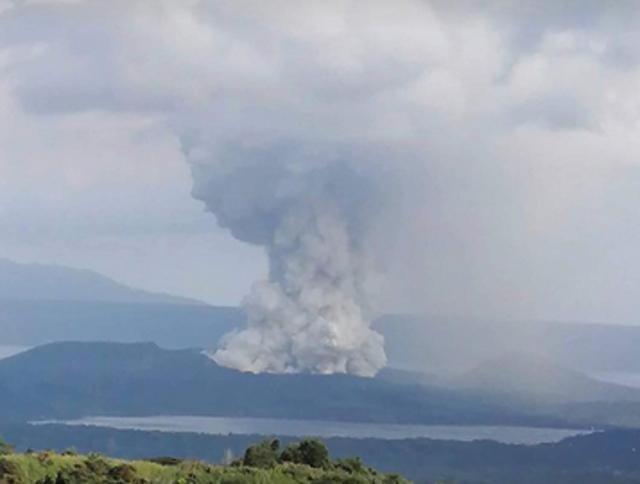 Interviewed on Dobol B sa News TV, Undersecretary Solidum said that a phreatic eruption was recorded at around 11:00 a.m.

After three hours, a stronger explosion was recorded around 2:00 p.m. The volcano spewed a kilometer-tall of ash column.

From Alert Level 1, the alert status of Taal was raised to Alert Level 2. “This means that there is probable magmatic intrusion that may or may not lead to an eruption,” PHIOVOLCS said.

Since 28 March 2019, PHIVOLCS said Taal volcano seismic network has manifested moderate to high level of seismic activity which were felt from Intensity 1 and Intensity 3 in the following areas:

PHIVOLCS reminded the public that the main crater should be strictly off-limits because sudden steam explosions can occur and high concentrations of lethal volcanic gases can be released.

“The northern portion of the Main Crater rim, in the vicinity of Daang Kastila Trail, can also become hazardous when fumarolic or degassing activity along existing fissures suddenly increases,” it said.

Furthermore, “the public is also reminded that the entire Volcano Island is a Permanent Danger Zone (PDZ), and permanent settlement in the island is strongly not recommended.”

In light of the ongoing phreatic activity in the main crater, PHIVOLCS advises precautionary evacuation of Taal Volcano Island pending observation of the volcano’s condition within the next 48 hours.