Widespread concerns about high-fluoride groundwater and their health risks have been raised worldwide. Weathering of volcanic minerals is regarded as a principal source of groundwater fluoride in regions with volcanic bedrocks. However, how does the volcanic minerals control fluoride occurrence, if it induces other hydrogeochemical processes participating in and how this relates to human health still remain unclear. This study takes Kenya Rift Valley, which has volcanic geological formations, as an example to delineate the occurrence and origins of high-fluoride shallow groundwater with analysis of hydrochemistry, graphical and multivariate statistical methods. Over 40% of shallow groundwater (F–: up to 23.5 mg/L) show elevated fluoride values over the WHO standards of 1.5 mg/L. High fluoride groundwater are generally Na-rich and Ca-poor with high pH and HCO3¯ concentrations. Hydrogeochemical and principal component analysis indicate that weathering of hyper-alkaline volcanic rocks could release accumulated fluoride in melts and volatile fractions, as well as in clay minerals. Alkaline condition and high HCO3– contents lead to the competitive desorption of F– from clay minerals and Fe-hydroxides into groundwater. Clay minerals also provide abundant exchange sites where cation exchange happens and promotes the release of F– from the sediments by controlling the dissolution/precipitation of calcite and fluorite. Health risk assessment results show that chronic health risks by groundwater geogenic fluoride ingestion are identified to various individuals, with highest threats in children. Finally, a conceptual model has been developed to demonstrate the formations of high geogenic fluoride groundwater in regions with volcanic bedrocks and its relation with human health. 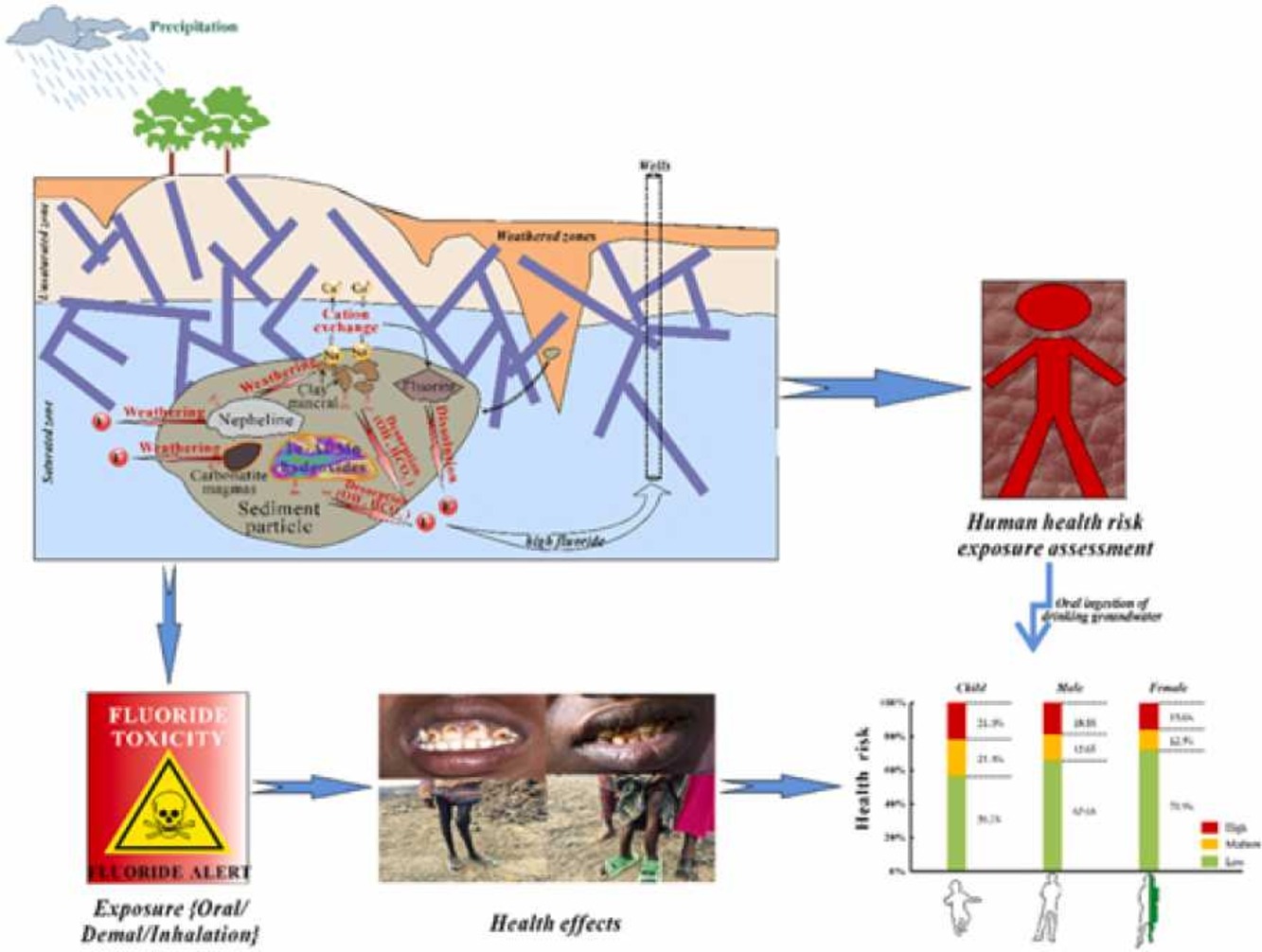 With the explosion of population growth and expansion of economic activities worldwide, increasing water demand is occurring (Narsimha, 2020). Compared to surface water bodies, groundwater is generally considered to be less susceptible to contamination and pollution (Meffe and de Bustamante, 2014). Hence, groundwater is the most extracted water resource and intensively consumed to meet all major demands such as domestic, agricultural, and industrial (Li et al., 2019; Rashid et al., 2018). However, due to the unreasonable exploitation and utilization of groundwater resources, aquifer contamination is a growing problem in many parts of the world (Banerjee and Nagesh, 2018; Chaudhuri and Ale, 2014b; Narsimha, 2020; Vithanage and Prosun, 2015). Geogenic F¯ contamination in groundwater is a representative major concern and being a challenge for safe water supply. Long-term intake of high fluoride groundwater can lead to maladies of water-borne disorders, such as dental fluorosis, skeletal fluorosis, and even tissue and organ carcinogenesis (Xiao et al., 2022). A guideline value of 1.5 mg/L is given by the World Health Organization (WHO) for long-term exposure (WHO, 2004). Studies have shown that regions that have low to high fluoride contamination in groundwater are mostly characterized by the presence of crystalline basement rocks or volcanic bedrocks during which the dissolution of F-containing minerals is promoted by arid/semi-arid climatic conditions (Kim and Jeong, 2005; Macdonald et al., 2011). Additionally, most high fluoride groundwater belongs to Ca2+ deficient Na-HCO3 type water with higher residence time, and longer distance from the recharge areas (Banerjee, 2015, Lavanya et al., 2017).

Kenya Rift Valley is arid/semi-arid lands, where groundwater accounts for over 60% of water resources for domestic, agricultural, and industrial use and over 85% of the population depend entirely on groundwater. However, high concentrations of geogenic fluoride, up to 180 mg/L in groundwater, have been reported in Kenya (Ayenew et al., 2008, MacDonald et al., 2012). This elevated level of F¯ has resulted in the prevalence of fluoride related health problems such as dental and skeletal fluorosis (García et al., 2012; Gevera et al., 2018; Fig. 1). Plenty of researches are focus on the extent of fluorine toxicity and levels of fluorosis through drinking high fluoride groundwater (Rango et al., 2012). Other regional studies have determined the hydrogeological characteristics and hydrogeochemical behavior of fluoride in natural waters (Tiwari et al., 2012). It is generally believed that the principal source of fluoride in groundwater of Kenyan relates to water interactions with rocks, especially volcanic minerals (Olaka et al., 2016). But it is more necessary to know not only the source but also how does the volcanic minerals weathering control fluoride occurrence, if it induces other hydrogeochemical processes taking part in and how this relates to human health. Without such knowledge, it is difficult to develop effective exploitation and management strategies for groundwater of the Kenya Rift Valley.

Therefore in the present study, the hydrogeochemistry of groundwater and geological formations for enrichment of F¯ in groundwater of Kenya Rift Valley have been evaluated. The main objectives of this paper are as follows: (1) to delineate the occurrence of F in the groundwater, (2) to identify the origins of high geogenic fluoride groundwater, placing more emphasis on weathering of volcanic minerals and its induced hydrogeochemical processes participating in, and (3) to relate the geogenic fluoride with human health. Only by understanding these will it be possible to implement groundwater management strategies and reduce the health impact of fluoride in groundwater in places with similar geologic settings.

The study area is located in the central upper region of the Kenya Rift Valley within the large Nakuru County in the Republic of Kenya (Fig. S1 and Fig. 2). It covers a total area of 7484 km2 and extents between latitudes ??1.07 N and ??0.30 N, and longitudes 35.42 E and 36.6 E. The altitude of the area lies between 1642 m to 2302 m. According to Kenyan National Bureau of Statistics (KNBS) of 2019, there are 47 million people within the study area. Decades of population pressures have brought about changes in land use patterns from former highland areas to relatively large, intensive farms (Mutoko et al., 2014). However, farms within the Kenya are often integrated crop-livestock production systems, with stock farming thriving and maize being the main food crops (Herrero et al., 2014, Van de Steeg et al., 2010). Hence, the study area is still a zone with low agricultural activity intensity.

4.2. Distribution of fluoride in groundwater

The F– concentration in groundwater of the Kenya Rift Valley varies between 0.01 mg/L and 23.5 mg/L, with a mean value of 3.35 mg/L. Approximately 40% of the groundwater in shallow aquifers within the study area exhibits high fluoride values over the WHO/Kenya Standards (F: 1.5 mg/L). The distribution of F¯ in groundwater within the study area shows wide spatial heterogeneity (Fig. 2) with samples from similar elevation demonstrating large fluoride content variations (Table S2). It is interesting to note that F¯ concentrations in the upper zones of the study area are found to be relatively higher with similar spatial variation. In the upper zones, igneous geological formations render the leaching of fluoride-rich igneous rocks (e.g., fluorspar), thereby enriching the F¯ contents. Hence in this case, geological condition plays a critical role.

Consumption of fluoride-contaminated groundwater, with a potential to cause 80% of the diseases, has a notable impact on the exposing health (Narsimha and Sudarshan, 2017). Though fluoride is considered to be an important element for the developmental growth of human skeletal, and dental enamel formation, higher content of groundwater fluoride is responsible for dental and skeletal fluorosis. Therefore, the health risk assessment is conducted to calculate ADD and HQ values for children and adults in the study area.

Calculations indicate that the ranges of ADD ingestion for children, male and female in Kenya Rift Valley are observed to be 0.001–1.222, 0.001–0.904 and 0.001–0.855, with an average value of 0.174, 0.129 and 0.122, respectively (Table 1). The values of HQingestion span from 0.01 to 20.37, 0.01–15.06 and 0.01–14.24 for children, male and female respectively. It is noted that children top out for the maximum and average values of ADDingestion and HQingestion in the study area, indicating that children are in the highest health risks by groundwater fluoride ingestion. The health risks for various individual are in the order of children >?male >?female. Generally, according to HQ values, health risks can be classified into three levels: low and negligible risk (HQ<1), medium risk (1?<HQ<4) and high risk (HQ>4). It is calculated that all the individuals are in health risks to some extent. Specifically, children suffer from low to high risk, with 56.3% in low chronic risk, 21.8% in medium chronic risk and 21.9% in high chronic risk. Large proportions of male and female are in low risk category. 15.6% of male and 12.5% of female fall in medium risk and 18.8% of male and 15.6% of female are in high risk category.

Integrated analysis of hydrogeochemistry, graphical and multivariate statistical methods provide important clues for understanding the occurrence and origins of high fluoride groundwater in shallow aquifers in Kenya Rift Valley, which has volcanic and quaternary geological formations. The main findings are as follows:

(1) High F– groundwater (up to 23.5 mg/L) occurs in shallow aquifers, with over 40% showing elevated fluoride values over the WHO standards. Spatially, F– contents are enriched in groundwater in the upper zones of the study area with igneous geological formations. Groundwater with high fluoride values are generally Na-rich and Ca-poor with relatively high pH and HCO3– concentrations, as indicated by hydrogeochemical and principal component analysis.(2) Weathering and breakdown of hyper-alkaline volcanic rocks contribute most of F– in groundwater, which were accumulated in melts, volatile fractions and clay minerals. Alkaline condition and competitive anion HCO3– promote the desorption of F– from clay minerals and Fe-hydroxides into the aqueous phase. Clay minerals also provide abundant exchange sites where cation exchange takes place. The conversion of Ca-rich groundwater to Na-rich groundwater helps release F– from sediments into groundwater, controlled by the dissolution-precipitation of calcite and fluorite.(3) The health risks by groundwater geogenic fluoride ingestion for various individual are in the order of children >?male >?female. Although majority of groundwater samples pose low health risk to people, 43.7%, 34.4% and 28.1% of the sampled groundwater have potential medium to high chronic health threats to children, male and female, respectively.

(4) Our research recommends that monitoring and safe management of groundwater is required to meet the ever-increasing demand of population and economic activities without further deterioration of groundwater and damage to human beings. Local authorities should take actions to establish comprehensive monitoring network of groundwater system, as well as install safe drinking water wells. Public awareness for sustainable and safe use of groundwater resources should also be improved.

* *PDF of study online at http://fluoridealert.org/wp-content/uploads/mwiathi-2021.pdf