Coastal erosion has already shut down one bore used to monitor groundwater for pollution, and threatens to take out a second.

These bores are within five metres of sand dunes, a few metres behind which sits 106,000 tonnes of spent cell liner (SCL) waste – which contains cyanide and fluoride – on a giant concrete pad.

The smelter company has rejected government reports that the sea will rupture its huge landfill with “catastrophic” results within a century, saying its preliminary modelling shows it is safe for 100-200 years.

The SCL pad is about 2km to the east of the landfill.

A new 33-page SCL groundwater status report from the company shows impacts are being felt on the nearby bores.

“Seawater intrusion started to occur in early 2020 due to coastal erosion of the southern coast,” it said.

The beach is eroding at four metres per year and that sped up recently, a company report to the Conservation Department shows.

That bore has been rendered unusable.

Another bore 11m from the dunes, is showing signs of “the start of sea water intrusion”.

The smelter, criticised by the government for not being transparent about the state of soil and water at the plant, released more than two decades of environmental monitoring reports yesterday.

However, these show it only began monitoring coastal erosion in 2017.

The erosion may also have broken a pipe used to discharge into the sea treated SCL effluent in 2015.

The company has promised to remove all 106,000 tonnes of SCL from the pad, and another 111,000 tonnes kept in four sheds at the plant.

The company denied there was a problem. Seawater had got into one bore last year, but was not in bores further up the beach, it said.

“Coastal erosion is closely monitored to ensure we fully understand any future impact it may have on the SCL storage facility,” the statement said.

“We note that a 2017 study found that the annual rate of erosion fluctuates significantly, and that the coastline was considerably closer in 1950 than seen today.”

RNZ has already reported on many of the annual environmental assessments, but the SCL report sent in March to the regional council is new.

It shows levels of cyanide and fluoride in groundwater under the beach are dropping. 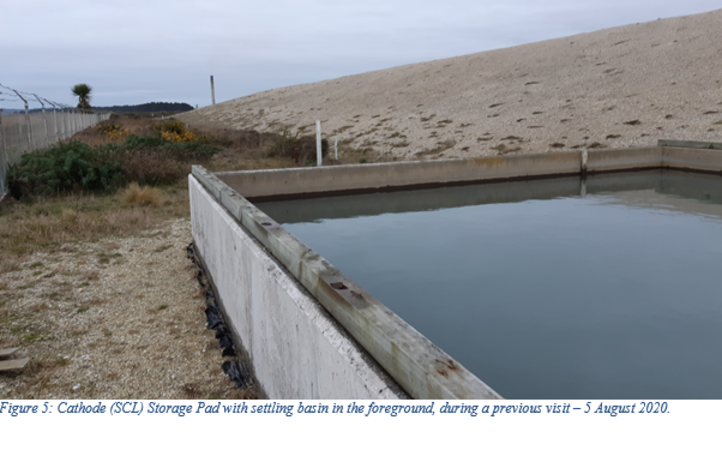 The outgoing chief executive of the Rio Tinto-controlled company, Stew Hamilton, said the data showed the smelter “has significantly reduced the environmental impact of our operations over the past two decades, and we are committed to further reducing this impact”.

The smelter is due to shut down in December 2024 and the government is struggling to ensure it does not leave a toxic legacy behind.

NZAS has promised not to, though the clean-up cost has been estimated at well over $300 million.

Officials, uncertain they have enough legal teeth in legislation the government is looking to beef up, have been debating giving cash incentives to the company to encourage a full clean-up.

The new SCL report shows high levels of total cyanide in groundwater moving from beneath the pad, then under the beach and into Foveaux Strait.

One table shows total cyanide at highs of 17 and 23.5 grams per cubic metre last year.

At other bores it is mostly under one gram.

Free cyanide, which is the highly toxic type, is recorded at far, far lower levels. However, total cyanide can change into more toxic forms.

The SCL pad cracked in the 1990s creating a 200m wide plume of cyanide-poisoned groundwater that gradually dissipated into the sea over the next decade or so.

Experts commissioned by NZAS said it caused no environmental harm.

A new pad was built with drainage to contain the leachate, which is treated to lower its cyanide levels, and pumped into the Strait.

“By 2020 the cyanide concentration had decreased by a factor of three since 2005” at a bore upstream of the pad, the report said.

Fluoride levels at the upstream bores remained steadily higher, at around four grams per cubic metre.

“The groundwater bores have been sampled at least four times since the spill occurred,” the report said.

“Our monitoring systems give us ample warning of any issue and enable us to alter processes wherever necessary,” Hamilton said in a statement.

“There has never been an instance during our 50 years of operation which could harm the public or local communities.

“We are releasing this information as part of our commitment to work more collaboratively and transparently with our partners.”

The company has been on a PR offensive since the government suspended talks with Rio Tinto in March – including inviting journalists to an off-the-record briefing with its global head of aluminium, in Wellington, a few days ago.

Groundwater has been sampled and analysed for pH, conductivity, free cyanide, total cyanide and fluoride concentrations twice a year at least, for 25 years. The data is sent each year to the regional council.