Environmental experts checking on contamination at Tiwai Point aluminium smelter are looking at 400 samples from 200 sites.

The NZAS has promised to close the smelter at the end of 2024 in a responsible manner. Photo: RNZ / Nate McKinnon

The smelter company has released a 40-page plan that commissioned independent experts GHD are working to.

The government suspended talks with smelter owner Rio Tinto in March, accusing it of not addressing how it will clean up the site.

The report out today is the first detailed look at how the smelter is conducting its closure plan.

“We want to make sure our community and the local and [central] government officials who monitor our performance understand our planning process and the importance we place on our environmental performance,” New Zealand Aluminium Smelters chief executive and site general manager Stew Hamilton said in a statement.

He declined an interview.

Two other reports released today, about historical levels of contamination, showed that two monitoring bores had collapsed recently due to coastal erosion.

Official reports have warned sea level rise is likely to have catastrophic consequences at the site within a century.

NZAS has promised to close the smelter at the end of 2024 in a responsible way, and remove all of the highly toxic 180,000 tonnes of spent cell liner (SCL) waste from the site.

One of the two historical reports shows the company has not had to provide groundwater test results from under a concrete pad – holding 106,000 tonnes of SCL waste – for years, but that it has monitored the water, and the council is now asking for the results of tests done from 2005-2020.

Today’s GHD report showed a host of new monitoring wells have been drilled.

These are being sampled for 14 types of contaminants, including hydrocarbons and 10 heavy metals, at many places around the peninsula, though for safety reasons they cannot drill under the potlines that run 24/7 or the electricity switchyards. 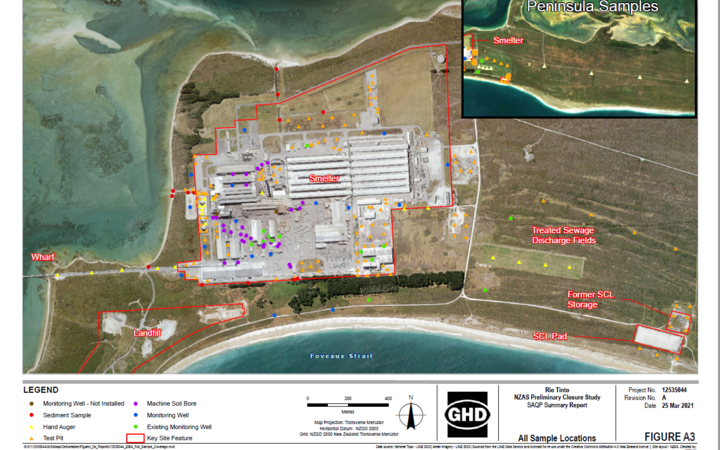 GHD report shows a host of new monitoring wells have been drilled at the Tiwai Point aluminium smelter. Photo: GDH

Sampling for this detailed site investigation is also not going on at the giant landfill. “No additional soil investigation was undertaken within this area as there is extensive knowledge of the nature of the fill material.”

The findings will be reported back to the regional council, Environment Southland.

Two historical documents laying out details of cyanide and fluoride levels in groundwater under the SCL storage pad and landfill have also been released.

As reported previously by RNZ, these show generally declining levels of fluoride and cyanide under the pad, following a highly toxic plume developing in the 1990s due to cracks in the old pad.

They also show fluoride levels are high in some bores near the beach by Foveaux Strait, and rising by five to 10 times since 2007 in groundwater at bores north of the landfill.

NZAS said this was probably due to “a change in direction of groundwater flow” due to dumpings.

On the plus side, fluoride levels dropped since spiking before 2009 at six out of eight coastal bores, near where aluminium dross – called Haysom’s dross – had been buried.

Hamilton said the company was confident, given the reviews and interaction with regulators, that it was complying with all its environmental obligations.

The company’s landfill consent issued by the regional council in 2003, and lasting till 2023, sets no maximum concentration levels of contaminates in groundwater.

However, the smelter report results from eight bores out of 19 bores at the landfill to the council.