Linda Birnbaum, former head of National Institute of Environmental Health Sciences, says she was barred from saying PFAS is a cause of human disease. 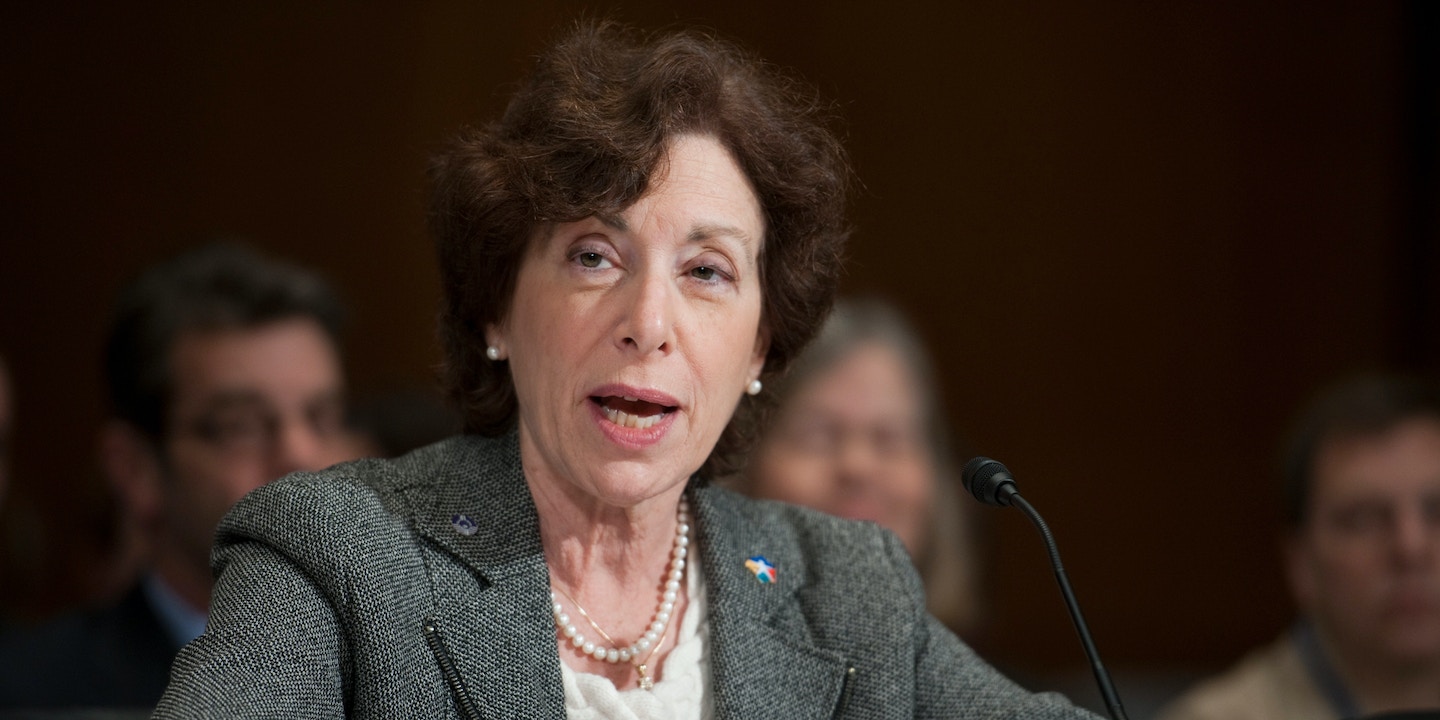 Linda Birnbaum, director of the National Institutes of Environmental Health Sciences and National Toxicology Program, during the Senate Environment and Public Works hearing on chromium-6 and perchlorate and other chemicals that have been found in drinking water supplies the U.S. Photo: Scott J. Ferrell/Congressional Quarterly/Getty Images

The widespread environmental contaminants known as PFAS cause multiple health problems in people, according to Linda Birnbaum, who retired as director of the National Institute of Environmental Health Sciences and the National Toxicology Program earlier this month.

The statement may come as little surprise to those following the medical literature on the industrial chemicals that have been used to make nonstick coatings, firefighting foam, and host of other products. Thousands of scholarly articles have linked the chemicals to at least 800 health effects. Some of the health problems found in humans — including elevated cholesterol levels, liver dysfunction, weight gain, reproductive problems and kidney cancer — have been shown to increase along with the levels of the chemicals in blood. Extensive research also shows that children with higher levels of PFAS have weakened immune responses.

Yet while she was leading the NIEHS, a division of the National Institutes of Health, whose mission is “to discover how the environment affects people, in order to promote healthier lives,” Birnbaum was not allowed to use the word “cause” when referring to the health effects from PFAS or other chemicals.

“I was banned from doing it,” said Birnbaum. “I had to use ‘association’ all the time. If I was talking about human data or impacts on people, I had to always say there was an association with a laundry list of effects.” Birnbaum said this restriction “was coming from the office of the deputy director. His job hinged on controlling me.” Birnbaum also said that the Trump administration has recently begun coordinating its messaging on PFAS.

Association, the coincidence of a chemical exposure and disease, and causation, in which a health problem happens as the result of the exposure, are different. Because many factors, including chance and genetics and exposures to other substances, can influence the development of disease, the term “cause” is used rarely and cautiously in the field of environmental health.

But Birnbaum, who has studied PFAS compounds for decades, believes the global contaminants have cleared that high bar. “In my mind, PFAS cause health effects because you have the same kind of effects reported in multiple studies in multiple populations,” she said in a phone interview. Birnbaum pointed in particular to longitudinal studies, which follow populations’ exposures and health over time. “You have longitudinal studies showing the same effects in multiple populations done by multiple investigators and you have animal models showing the same impact,” said Birnbaum. In addition, she pointed to studies that show the mechanism through which PFAS chemicals cause harm in people.

“That is pretty good evidence that PFAS or certain PFAS can cause health effects in people. It is not as strong for every effect, but there are quite a number of effects where they’re strong enough to say ‘caused,’” Birnbaum said. She pointed in particular to the relationship between the chemicals and immune response, kidney cancer, and cholesterol in humans, saying, “That data is very clear.”

Birnbaum has been targeted by the chemical industry and politicians beholden to it on several occasions during her nearly 40-year career as a federal scientist, which included 19 years at the Environmental Protection Agency. In 2012, Republicans on the House Science Committee went after Birnbaum for writing that endocrine-disrupting chemicals in the environment were responsible for “a staggering increase in several diseases.”

She also faced backlash after the National Toxicology Program conducted screenings of formulations containing glyphosate, the main active ingredient in Monsanto’s popular weedkiller Roundup. “There were huge attacks on the institute and on me personally related to glyphosate,” said Birnbaum, whose office was flooded with FOIA requests that she said came from law firms. “I had to hire four to six people to work on the FOIA issue. We were up to having about 140 to 150 backlogged FOIA requests. You couldn’t deal with them quickly enough.”

Her run-in with Republicans on the House Science Committee last year may have had the most severe consequences. Reps. Andy Biggs and Lamar Smith accused Birnbaum of lobbying based on an editorial in the journal PLOS Biology. In it, Birnbaum wrote that “U.S. policy has not accounted for evidence that chemicals in widespread use can cause cancer and other chronic diseases, damage reproductive systems, and harm developing brains at low levels of exposure once believed to be harmless.” She called for more research on the risks posed by chemicals and noted that “closing the gap between evidence and policy will require that engaged citizens — both scientists and non-scientists — work to ensure that our government officials pass health-protective policies based on the best available scientific evidence.”

After that, “everything was scrutinized that I did. Everything I did required clearance. Even in my lab,” said Birnbaum. “All of a sudden, everything had to go up at least to building 1,” she said, referring to the Bethesda building that serves as the administrative center for the National Institutes of Health. Birnbaum was also denied a salary increase after the incident and became aware that her job was at stake. “I was told that they were trying to fire to me.”

At the same time, PFAS compounds were becoming the focus of intense scrutiny from both state regulatory agencies and Congress. As contamination from the chemicals was being discovered around the country, it became clear that both the companies that made and used the PFAS compounds and the military, which used firefighting foam that contained them, could face billions of dollars of liability.

Proving a causal connection between the chemicals and disease will be central to holding them accountable. In litigation over PFOA contamination in West Virginia, DuPont’s lawyers were forbidden from questioning the causal relationship between exposure to the chemical and six different diseases, including testicular cancer and kidney cancer. The company has paid out over $1 billion in that case and subsequently spun off its division that makes PFAS compounds to a new company, Chemours.

Despite the voluminous research on the health effects of the chemicals, 3M, the company that first developed both PFOA and PFOS and sold PFOA to DuPont for many years, still argues that the compounds do not cause health problems. In her testimony before the House Committee on Oversight and Reform in September, Denise Rutherford, 3M’s senior vice president of corporate affairs, said that “the weight of scientific evidence has not established that PFOS, PFOA, or other PFAS cause adverse human health effects.” The company also requested that The Intercept remove the word “cause” in a recent article about PFAS. That request was denied.

Even though she knew she was being closely watched, Birnbaum felt it was important to continue to make her institute’s science public. At a meeting this summer, she reported on the results of rat studies done by the National Toxicology Program that linked exposure of very low doses of PFOA to pancreatic cancer. Birnbaum said that, based on that data, a safe dose of the chemical would be about .1 parts-per-trillion, 700 times lower than the EPA’s safety threshold, as The Intercept reported at the time.

The gulf between the threshold suggested by the new cancer data and the actual number published by the EPA pointed to a schism between the federal agencies — and reveals the inadequacy of the government response to the threats posed by the chemicals. Along with the delay of a report on PFAS by the Agencies for Toxic Substances and Disease Registry, which also proposed lower safety thresholds than those set by the EPA, Birnbaum’s public discussion of the alarming rat study may be part of the reason that the White House’s Office of Management and Budget began holding regular meetings of federal agencies working on PFAS in recent months. According to Birnbaum, two groups of federal scientists have been gathering to coordinate the government’s science, policy, and messaging around PFAS. The White House office did not respond to inquiries about the group.

For her part, Birnbaum is now enjoying being able to speak about science free of the constraints that came with her job, which had worsened in recent years. By the end, “I couldn’t even give a welcome at a meeting without approval,” she said. Asked what she would have done differently had she not been under such intense pressure, Birnbaum responded that “I would have used the word ‘cause.’”