home // News // What to watch for when science becomes politicized //

Science, in an ideal world, would be pure, pristine, and above any human frailties. We could look at any phenomenon we wanted — natural or human-made, past or present, terrestrial or beyond, experimental or observational — collect data on it and draw an incontrovertible conclusion. When science is done right, that’s arguably exactly how it works. But there are three key components that need to be in place:

A threat to any of these is a threat to the integrity of science.

Having all three of these doesn’t necessarily mean that science gets everything correct, as sometimes even scientifically sound investigations, data, participation and conclusions can be incorrect. But it’s the nature of science, with its verification, additional scrutiny and follow-up testing, that exposes those incorrect conclusions. The solution to bad or even insufficient science never comes from outside of science; the solution is always more and better science. When the full suite of evidence sees the light of day and can be properly evaluated, there’s no way out from a scientific truth.

There are a large number of people who think that science must have it wrong on a number of fronts. These include:

Chances are you have opinions on these matters. Chances are, if there’s an opinion you have that isn’t mainstream or in alignment with what scientists think, you have some sort of “conspiracy” argument lined up already.

Put it aside for a second. Let me tell you a few short stories about each of them. You might be surprised at what you hear.

From a public health standpoint, vaccination has saved millions upon millions of lives, and a lack of vaccination is one of the leading causes of preventable premature death. Deadly and crippling diseases have been all but eradicated: measles, whooping cough, polio, smallpox and more. Occasionally, people get sick, start showing symptoms of a disorder or die after a vaccination at approximately the same rates they do when they don’t get a vaccine. This has been studied to death, and with the exception of those who are allergic to vaccine components, there is no evidence that vaccination increases any rate of serious adverse effects over non-vaccination. But in places where vaccination isn’t mandatory, herd immunity is compromised, preventable diseases return and — in the worst case scenario — epidemics ensue.

By time the 1980s were coming to an end, the AIDS crisis was extraordinarily severe. The science was also incredibly clear: HIV is the virus that causes AIDS, which itself is just a collection of symptoms that show up in the late, often-fatal stages of an HIV infection. Despite the overwhelming causal evidence, one scientist — Peter Duesberg — smelled conspiracy, and continued to publish articles and papers questioning the link between HIV and AIDS. The editor of the Proceedings of the National Academies of Science attempted to dissuade him from publishing his non-peer-reviewed findings, stating,

If you wish to make these unsupported, vague, and prejudicial statements in print, so be it. But I cannot see how this would be convincing to any scientifically trained reader.

But many bought into the HIV/AIDS denialism, and a number of people refused potentially life-saving treatment and died — including famed boxer Tommy Morrison not too long ago — based on that proclamation. 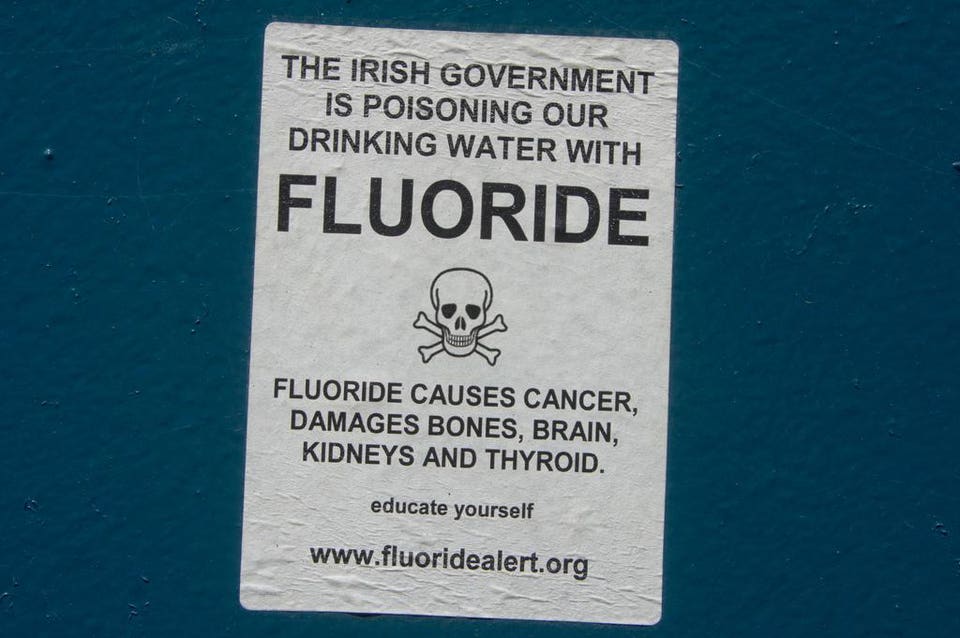 A poster put up by the Fluoride Action Network, one of the most notoriously anti-science activist… [+]

[Sic: this poster was not “put up” or made by the Fluoride Action Network]

Fluoridating drinking water has been one of the most cost-effective public health measures in the 20th century, particularly in low-income areas. The cavity reduction rate across the board of 40% in children with only the mild cosmetic side effect of dental fluorosis as a risk has improved dental health and outcomes for hundreds of millions. However, the notion of “purity” in drinking water has led many to believe that fluoride — which is poisonous in extremely large doses — is a poison in the doses we receive it through the tap. While patently untrue, a number of large cities, including Calgary in Alberta and Portland in Oregon, have successfully lobbied to not have fluoride in their drinking water. When accounting for demographics, the average child has 40% fewer cavities in all other major American and Canadian cities than in these two.

The atmospheric science of greenhouse gases has been well known, and temperature monitoring and historical records have been taken quite accurately since 1880. The results have been checked numerous times, independently and by a wide variety of teams, and the scientific conclusion is incontrovertible: the Earth is warming due to the atmospheric changes brought on by humans and the effects of industrialization. Many of you will hear arguments to the contrary, including on Forbes if you read non-science contributors like James Taylor or Larry Bell.

These are scientific truths in the sense that anyone can reproduce them. Anyone can study these phenomena and ought to arrive at the same conclusions. There will always be a few people — scam artists, incompetents, contrarians or simply people who are wrong — who don’t agree, but that doesn’t change the weight of the evidence. Scientists often get accused of groupthink, but the key to bringing in new ideas and perspectives is diversity. That doesn’t just mean in terms of race, religion or skin color, but in terms of:

and much more. Greater diversity means a greater variety of perspectives. It means that you get a Satyendra Bose, an Abdus Salam and a Lise Meitner in physics, who made revolutionary discoveries in nuclear and particle physics in the 20th century. (There are many examples in a variety of fields; physics is only my specialty.)

But the idea that one can dispute a scientific conclusion because there are dissenting opinions out there is the most dangerous one to science in society. Science doesn’t get politicized to manufacture consent or to obtain continued funding; the scientific process itself safeguards against that. When science gets politicized, it isn’t about tipping the scales on a particular issue for those manufacturing doubt; it’s about what comes next.

Science will not put up with living in a post-truth era; science is true whether you accept it or not. What we need to be vigilant about — now more than ever — is making sure that even as we disagree about policy, that the science isn’t influenced by such pressures. That science is a place that’s welcoming and open to everyone who’s capable and qualified, that the science that’s done is open and scrutable, and that we remain vigilant against normalizing blatant falsehoods masquerading as legitimate alternatives to understood science. Because if we don’t accept the truth of what is already known, we’ve set the whole world up to be exactly what P.T. Barnum dreamed of: the suckers that are born each and every minute.

I am a Ph.D. astrophysicist, author, and science communicator, who professes physics and astronomy at various colleges. I have won numerous awards for science writing

Articles on fluoridation by Ethan Siegel: