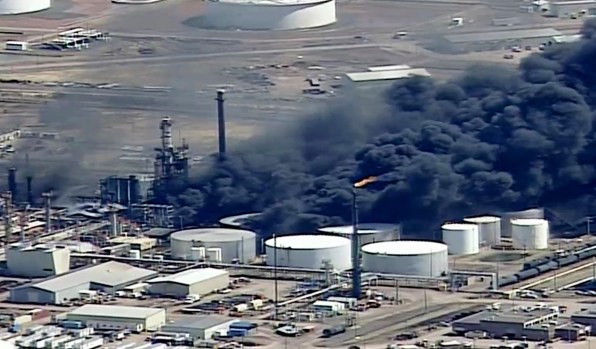 This aerial image from video provided by KSTP-TV in Minneapolis, shows smoke rising from the Husky Energy oil refinery after an explosion Thursday, April 26, 2018, at the plant in Superior, Wis. Authorities say several people were injured in the explosion. (KSTP-TV via AP)

Fires and explosions this week at a Wisconsin refinery that uses the same hydrofluoric acid as refineries in Torrance and Wilmington are the sort of disaster local activists and some government officials fear could happen in the South Bay.

Thursday’s blaze came just two days before a South Coast Air Quality Management District meeting at 9 a.m. Saturday at Torrance City Hall, where the agency’s Refinery Committee will discuss a new rule that could ban the chemical from the only two refineries in the state to still use it.

The Wisconsin accident was the second this month involving a U.S. refinery that uses hydrofluoric acid.

About 970 pounds of hydrofluoric acid and three other chemicals were released last week following an explosion and fire at a refinery along Texas’ Gulf Coast owned by Valero, which also owns the Wilmington refinery.

The accidents “underscore the necessity for the South Coast Air Quality Management District to act swiftly to eliminate the threat of a toxic HF acid release in our South Bay community,” said Sally Hayati, president of the Torrance Refinery Action Alliance. “TRAA will continue to lead the community effort to rid the South Bay of Los Angeles from this toxic chemical.”

But Gesuina Paras, a spokeswoman for the PBF Energy-owned refinery in Torrance, said there are crucial differences between the Wisconsin and local refineries.

“We recognize this incident may raise concerns among our neighbors,” she said. “From what we’ve seen, the Superior refinery incident reportedly involved a fire in an asphalt tank, precautionary evacuation and activation of safety systems that worked as designed following established procedures due to the presence of a hydrofluoric acid alkylation unit.

“Importantly, our Torrance Refinery is configured differently than Superior and our alkylation unit is located far from our heavy oil storage facilities.”

More than 20 people were treated at local hospitals and most of the city of Superior, Wisconsin, which has a population of 27,000, was evacuated Thursday after a tank of crude oil or asphalt exploded about 10 a.m. at the Husky Energy oil refinery.

Overnight evacuation orders were issued for a three-mile radius of the refinery, an area that included a hospital and three schools, as well as a 10-mile corridor south of it where plumes of thick smoke were heading.

The fire reportedly was so hot that firefighters were unable to get near enough to try to extinguish it.

Cause of the fire was unknown. The refinery was preparing to shut down for a major maintenance project dubbed a “turnaround.” The Torrance refinery performed similar work earlier this year.

Evacuations began about 4 p.m. at the nearby University of Wisconsin-Superior because of fears a tank containing hydrofluoric acid could be consumed in the fire.

“We’re evacuating because there’s a tank of product there that, if it ruptures, it could create a plume that could be hazardous to one’s health,” said Keith Kesler, the emergency management director for the county. “We’ve done some plume modeling with the wind and stuff. That’s what was used to develop the evacuation zone that we have in place in the event that the tank ruptures.”

Hydrofluoric acid can form a ground-hugging toxic cloud of gas at room temperature.

Authorities in Southern California are worried a catastrophic release of the gas from either local refinery into the densely populated surrounding neighborhoods could kill or injure thousands.

In comparison, the area around the Wisconsin refinery is relatively sparsely populated.

The Torrance and Wilmington refineries are among the top three in the nation using hydrofluoric acid in densely populated areas, according to an AQMD presentation that will be made at Saturday’s meeting.

A refinery in Philadelphia sits in the nation’s most densely populated neighborhood, with nearly 300,000 people living within three miles of it.

The small refinery in Wisconsin uses about 78,000 pounds of hydrofluoric acid, according to the Duluth News Tribune, citing Environmental Protection Agency records. The Torrance refinery uses much more.

A February 2015 explosion at the plant came close to hitting a tank containing tens of thousands of gallons of HF.

California’s attorney general joined elected officials in several South Bay cities, local congressional representatives and members of the state Legislature in calling for the AQMD to phase out the chemical.

“We agree that the use of HF by refineries presents an extraordinary hazard that requires robust and meaningful regulation,” said a Thursday letter co-authored by Deputy Attorney General James R. Potter. “It is within SCAQMD’s authority to adopt a rule to prevent releases of HF from refineries. Accordingly, the Attorney General urges SCAQMD to craft Proposed Rule 1410 in a manner that provides the neighboring environmental justice communities the maximum protection possible.”

Neighborhoods near the two refineries are home to largely low-income, minority residents, the letter points out.

The Associated Press contributed to this article.