Fluoride is capable of inducing neurotoxicity, but its mechanisms remain elusive. This study aimed to explore the roles of endoplasmic reticulum (ER) stress and autophagy in sodium fluoride (NaF)-induced neurotoxicity, focusing on the regulating role of ER stress in autophagy. The in vivo results demonstrated that NaF exposure impaired the learning and memory capabilities of rats, and resulted in histological and ultrastructural abnormalities in rat hippocampus. Moreover, NaF exposure induced excessive ER stress and associated apoptosis, as manifested by elevated IRE1a, GRP78, cleaved caspase-12 and cleaved-caspase-3, as well as defective autophagy, as shown by increased Beclin1, LC3-II and p62 expression in hippocampus. Consistently, the in vitro results further verified the findings of in vivo study that NaF induced excessive ER stress and defective autophagy in SH-SY5Y cells. Notably, inhibition of autophagy in NaF-treated SH-SY5Y cells with Wortmannin or Chloroquine decreased, while induction of autophagy by Rapamycin increased the cell viability. These results were correlated well with the immunofluorescence observations, thus confirming the pivotal role of autophagic flux dysfunction in NaF-induced cell death. Importantly, mitigation of ER stress by 4-phenylbutyrate in NaF-treated SH-SY5Y cells inhibited the expressions of autophagy markers, and decreased cell apoptosis. Taken together, these data suggest that neuronal death resulted from excessive ER stress and autophagic flux dysfunction contributes to fluoride-elicited neurotoxicity. Moreover, the autophagic flux dysfunction was mediated by excessive ER stress, which provided novel insight into a better understanding of fluoride-induced neurotoxicity. 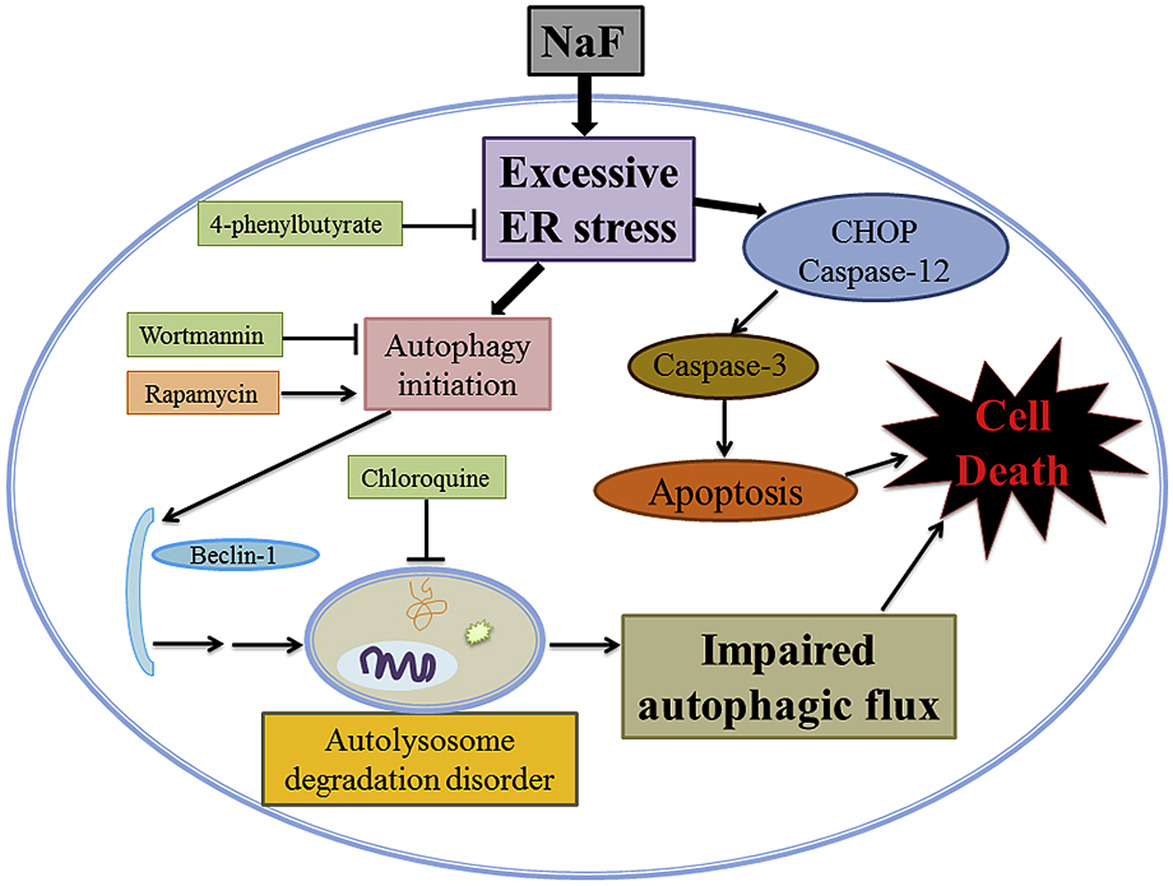 … In order to gain a better understanding of the NaF neurotoxicity and its underlying mechanisms, the NaF-treated rats and SH-SY5Y cells were used in the present study. The MWM [Morris water maze test] results showed that exposure of rats to NaF is associated with decreased learning and memory abilities. This is consistent with previous studies where animals exposed to fluoride with similar dosages and duration can also demonstrated different characteristics of neurotoxicity, such as neurochemical alterations, neurodegeneration, open-field habituation abnormity, neurotransmitters change, and memory impairment (Jiang et al., 2014b; Liu et al., 2010).

The present results are in agreement with Jiang’s study, and extended by the observation of ultrastructure alterations of ER and mitochondria, implying ER and mitochondria impairment following NaF exposure. These results, together with the cognitive deficits of rats, suggest that NaF exposure induces not only the behavioral changes, but also the morphological and functional impairments…

5. Conclusions
Taken together, our results present in vitro and in vivo evidence showing that exposure to the environmental toxicant fluoride results in excessive ER stress, and autophagic flux dysfunction. In particular, it is the first time, to our knowledge, to demonstrate a molecular link between ER stress-mediated autophagic flux dysfunction and fluoride-induced neurotoxicity, which provides novel insight into a better understanding of mechanisms and prevention for fluoride neurotoxicity.