Inorganic arsenic (iAs) and fluoride (F–) are naturally occurring drinking water contaminants. However, co-exposure to these contaminants and its effects on human health are understudied. The goal of this study was examined exposures to iAs and F– in Chihuahua, Mexico, where exposure to iAs in drinking water has been associated with adverse health effects. All 1119 eligible Chihuahua residents (>18 years) provided a sample of drinking water and spot urine samples. iAs and F– concentrations in water samples ranged from 0.1 to 419.8 µg As/L and from 0.05 to 11.8 mg F–/L. Urinary arsenic (U-tAs) and urinary F– (U-F–) levels ranged from 0.5 to 467.9 ng As/mL and from 0.1 to 14.4 µg F–/mL. A strong positive correlation was found between iAs and F– concentrations in drinking water (rs = 0.741). Similarly, U-tAs levels correlated positively with U-F– concentrations (rs = 0.633). These results show that Chihuahua residents exposed to high iAs concentrations in drinking water are also exposed to high levels of F–, raising questions about possible contribution of F– exposure to the adverse effects that have so far been attributed only to iAs exposure. Thus, investigation of possible interactions between iAs and F– exposures and its related health risks deserves immediate attention. 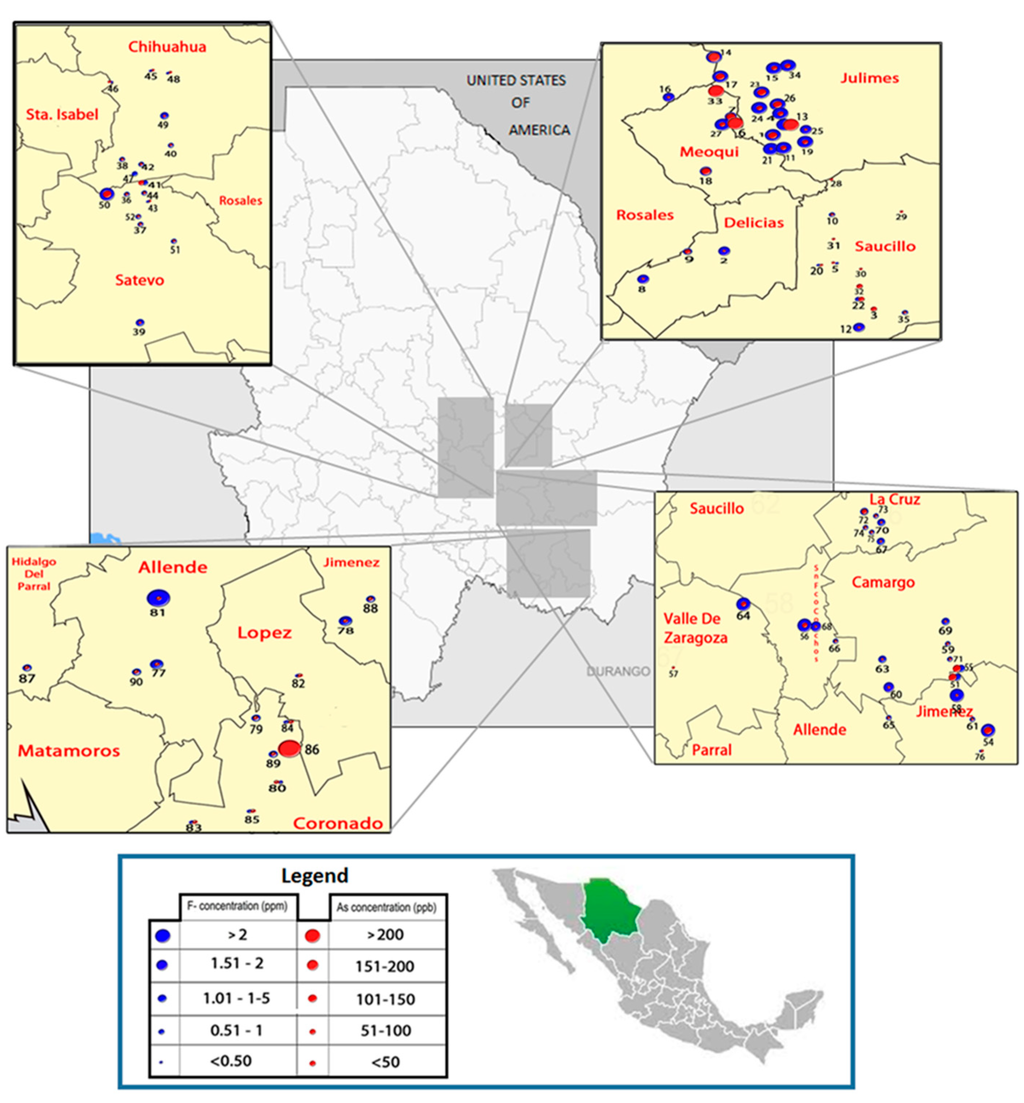 “Notably, both signs of dental fluorosis and skin lesions typical of the chronic iAs exposure (keratosis and changes in pigmentation) were observed in several participants during the introductory medical exam (unpublished data). Previously, dental fluorosis was reported for 80% of the population in this area as a consequence of the high F– levels in drinking water (0.7 to 8.6 mg/L) [40]. Although the adverse effects of the isolated exposures to iAs and F– have been widely studied and are relatively characterized, the potential effects associated with the simultaneous exposure have not been systematically examined.

“… immediate measures should be taken to reduce the exposure, particularly for vulnerable population, and specifically for pregnant women and children. The role of F– exposure in the health risks previously attributed to iAs exposure alone [19,20] should be systematically studied.”