Water fluoride levels above the World Health Organization’s guideline (1.5 mg/L), common in overexploited aquifers, represent a health hazard. Our objective was to assess the health risks posed by exposure to fluoride in different drinking water sources in a contaminated basin in Mexico. Fluoride was measured in mutual drinking water sources and in the urine of 39 children and women. Risks were estimated through hazard quotient (HQ) by drinking water source. Dental fluorosis was assessed in the children. Mean fluoride water concentrations (mg/L) were: well, 4.2; waterhole, 2.7; bottled, 2.1; rainwater, 0.4. The mean urinary fluoride concentrations (specific gravity adjusted) were 2.1 mg/L and 3.2 mg/L in children and women, respectively. Our multiple linear regression model showed children’s urinary fluoride concentrations increased 0.96 mg/L for every 1 mg/L increase in water fluoride (p < 0.001). Dental fluorosis was diagnosed in 82% of the children, and their HQ according to drinking water source was: well, 1.5; waterhole, 1.1; bottled, 0.8; harvested rainwater, 0.3. The pervasive dental fluorosis indicates a toxic past fluoride exposure; urinary fluoride levels and HQs indicate high exposure and current health risks for most children. Drinking harvested rainwater will likely prevent most of the local fluoride exposure. 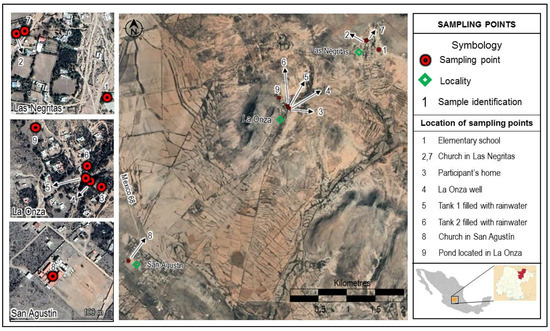 This is the first study to analyze the association between F– concentrations in different drinking water sources and urinary F– concentrations in children and women in the CARL. We observed a strong association in magnitude and significance of both the water F- levels prediction of urinary F- levels in children (? = 0.96 and p value < 0.001) and of the difference in urinary F- levels depending on drinking water source in women and children (p value < 0.05). Rain-harvested water proved the only source below the F– WHO drinking water guideline, and children who reportedly drank this water were the only ones with mean urinary F– levels (1.3 mg/L) below those associated with neurotoxicity in children exposed in different windows of early life (1.7 mg/L). It is also the first study to identify a non-probabilistic health risk of the population of women, and especially children, associated with well water F– concentrations, since the HQs of this source (1.25 and 1.5, respectively) indicate an exposure above the reference dose.
Even though our sample size was small and recruited by convenience (not guaranteeing representativeness), the results of this risk assessment are especially relevant to other CARL populations. On the one hand, we might be able to extrapolate the exposure dose and health risks to other inhabitants who share sociodemographic characteristics and drink water from the several existing wells with similar or higher F– concentrations than the well we studied. On the other hand, our results are important given a possible increase of aquifer F– concentrations in the future, as the trends suggest in some local wells, due to increased overexploitation in response to population growth and agricultural water demand expansion.
In spite of our study’s small population sample and number of sampled water sources, which will need to be built upon in future studies to decrease uncertainty, our results strongly suggest that exposure to toxic drinking water F– levels is preventable in the CARL by switching to harvested rainwater. Future studies could complement these results by quantitatively assessing F– exposure through diet, especially considering soda and confirming that local salt is indeed not fluoridated.

This research received no external funding.

The study was conducted according to the guidelines of the Declaration of Helsinki and approved by the Ethics Committee of the National Institute of Public Health, Mexico (protocol code CT1P01, date of approval: 31 May 2018).

The data presented in this study are available on request from the corresponding author. The data are not publicly available due to privacy issues.

The authors declare no conflict of interest.