Free radicals and other oxidants have enticed the interest of researchers in the fields of biology and medicine, owing to their role in several pathophysiological conditions, including fluorosis (Fluoride toxicity). Radical species affect cellular biomolecules such as nucleic acids, proteins, and lipids, resulting in oxidative stress. Reactive oxygen species-mediated oxidative stress is a common denominator in fluoride toxicity. Fluorosis is a global health concern caused by excessive fluoride consumption over time. Fluoride alters the cellular redox homeostasis, and its toxicity leads to the activation of cell death mechanisms like apoptosis, autophagy, and necroptosis. Even though a surfeit of signaling pathways is involved in fluorosis, their toxicity mechanisms are not fully understood. Thus, this review aims to understand the role of reactive species in fluoride toxicity with an outlook on the effects of fluoride in vitro and in vivo models. Also, we emphasized the signal transduction pathways and the mechanism of cell death implicated in fluoride-induced oxidative stress. 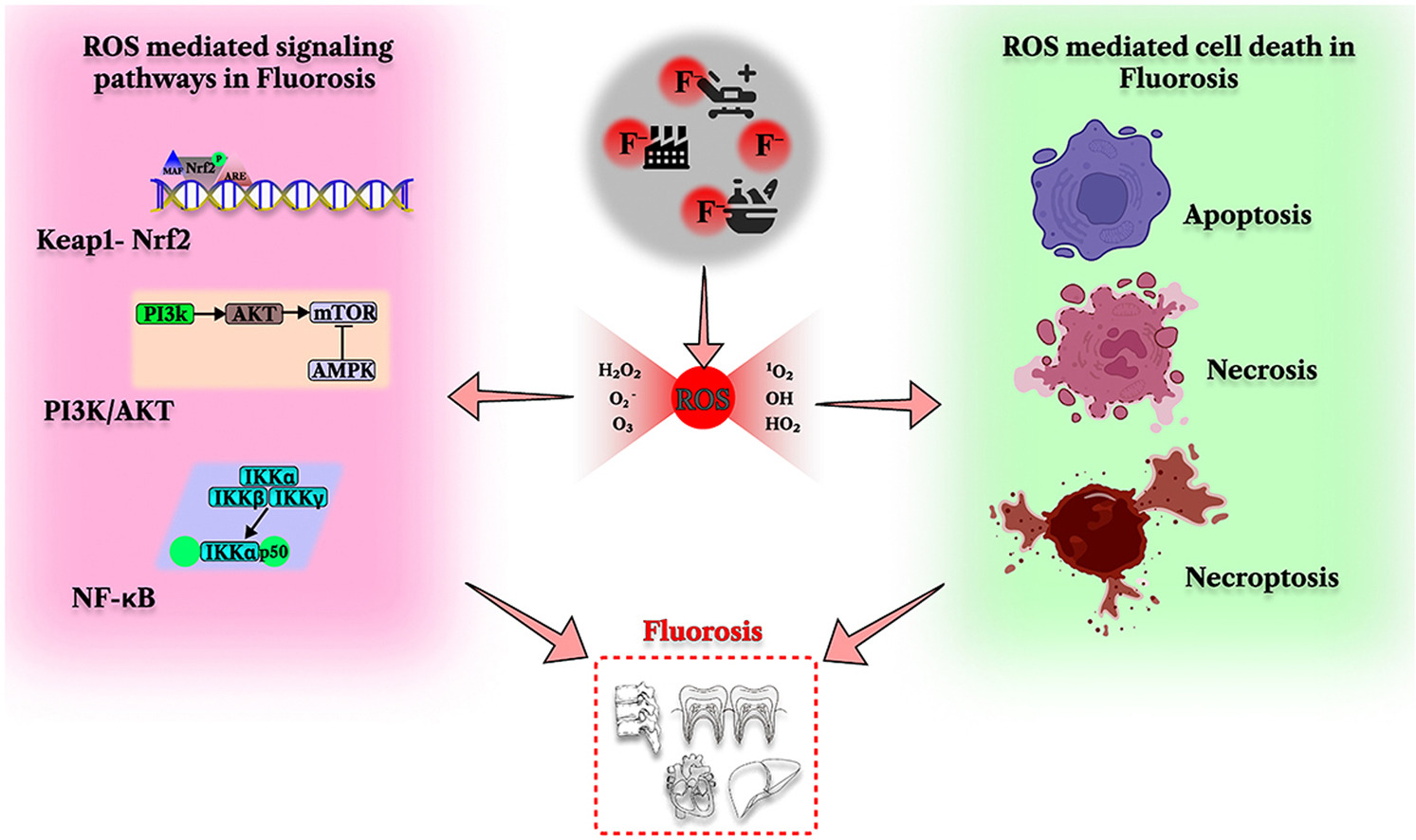 Fluorine is one of the most reactive elements with high electronegativity and the second-highest electron affinity. It has an oxidation number of –1 and exists as either inorganic fluorides or organofluorine compounds [1,2]. F– exposure in humans occurs majorly from consuming water contaminated by F– from various natural and anthropogenic sources such as volcanic eruptions, mining residues, industrial effluents, phosphorus fertilizers, and certain domestic activities [3,4]. F– is considered a double-edged sword, having both beneficial and adverse effects on humans as well as other animals. F– is beneficial to human health by promoting bone development and preventing tooth decay and dental caries at low levels. However, prolonged exposure to higher levels can cause F– toxicity or “fluorosis”. Although fluorosis is generally characterized by dental mottling and skeletal deformities, cellular and functional damages in multiple organ systems are also observed [[5], [6], [7]]. Therefore, the level of F– consumption becomes critical to human health, which is why the World Health Organization (WHO) has set the maximum permissible limit of F– in drinking water at 1.5 ppm (1.5 mg/L) [8].

Being a chemically active ion, F– affects the oxygen metabolism and induces oxygen-free radicals enhancing oxidative stress in the blood [9,10]. This free radical generation and resulting oxidative stress have been identified to catalyze the harmful effects of F– both at the cellular and molecular levels [11]. F– induced generation of reactive oxygen species (ROS) such as superoxide anion (O2–), hydrogen peroxide (H2O2), peroxynitrite (ONOO–), hydroxyl radical (OH), and nitric oxide (NO) affects cell functions [12]. Excessive ROS generation alters the cellular redox homeostasis, subsequently inhibiting the activities of antioxidant enzymes like superoxide dismutase (SOD), catalase (CAT), glutathione peroxidase (GPx), and glutathione reductase (GR). Further, it also decreases the levels of non-enzymatic antioxidants such as glutathione (GSH), vitamin A, E, and C [[13], [14], [15]], adding to the prevailing oxidative stress conditions [16]. F– induced oxidative stress has been reported in many studies associated with F– toxicity [[17], [18], [19], [20], [21]]. Hence, the altered levels of endogenous antioxidants due to excessive generation and accumulation of cellular ROS under oxidative stress conditions can be considered the major mechanism in F– pathogenesis [[22], [23], [24]].

ROS are highly reactive, unstable molecules formed from the biological reduction of molecular oxygen (O2) during aerobic metabolism [38]. ROS act as a major contributor to oxidative stress. These radicals can either act as a reductant, transferring electrons to the oxidant, or as an oxidant, donating electrons to an electron recipient. The various sources of free radicals and their examples are represented in Fig. 1, Fig. 2. Among them, O2– and OH are the most common endogenous and exogenous

The oxidant-antioxidant dyshomeostasis in a cell leads to oxidative stress. Excessive F– exposure has been shown to cause oxidative stress in the liver [43,44], kidney [45,46], uterus [47], and brain of experimental animals [[48], [49], [50]]. Further, F– accumulation also increases the generation of free radicals that ultimately disrupts the biological system.

Apoptosis is a type of complicated cell death mediated by a series of signaling cascades. Especially, the caspase-dependent and independent signaling pathways help in the removal of unnecessary and defective cells [85,86]. Apoptosis is also essential in various biological processes, including cell proliferation, differentiation, tissue homeostasis, and senescence [87,88]. Apoptosis can be induced by two primary signaling mechanisms, namely the intrinsic and the extrinsic pathways both activated

Nrf2 confers defense mechanisms against oxidative stress caused by harmful stimuli, such as chronic illness and chemical intoxicants [136]. Nrf2 is generally found inactive in the cytoplasm due to its association with Keap1, a repressor protein that suppresses Nrf2 activity. Under stress conditions, the Keap1 cysteine thiol residues are oxidized, resulting in the dissociation of Nrf2 from the Keap1/Nrf2 complex that subsequently gets transported into the nucleus. This nuclear Nrf2 then

Oxidative stress is an inevitable cellular stress condition and has been implicated in the pathophysiology of chronic diseases, including fluorosis. The mitochondrial respiratory complex is the major source of ROS generation in cells and tissues. Besides, xenobiotic exposure is also responsible for ROS/electrophile generation leading to oxidative stress. Research findings from various in vitro and in vivo studies highlight the effects of F– on ROS generation and oxidative stress-mediated