This study reviewed groundwater fluoride and the associated human health risks in Ghana. The physical and chemical properties of fluorine that make it soluble in the soil and aquifer materials were carefully reviewed. The pathways through which fluoride gets into groundwater were also reviewed. Fluoride concentrations in groundwater can be as high as 67 mg/L. Its natural concentration in water depends largely on the nature of the geologic formations; fluoride-bearing minerals, anion exchange capacity of aquifer materials (OH– for F–), pH, temperature and residence time of waters within a particular formation. High F– concentrations in groundwater are due to geogenic and anthropogenic sources. The fluorosis endemic parts of Ghana are only restricted to northern Ghana, where elevated groundwater fluoride concentrations (0.05–13.29 mg/L) in the North East Region, Northern Region, Upper East Region, and surrounding communities have been reported. The elevated groundwater fluoride concentrations are as a result of intense water-rock interaction, ion exchange reactions, and mineral dissolution from the Bongo Granitoids and Voltaian sediments. Children in the fluorosis endemic parts of Ghana are exposed to the intake of more fluoridated water than the other age groups and thus, children have higher non-carcinogenic risks. Although, almost all the age groups show evidence of dental fluorosis, children are the hypersensitive population. It is recommended that sustainable defluoridation methods such as adsorption, precipitation, membrane separation and ion exchange techniques be employed to curtail the menace of dental fluorosis. 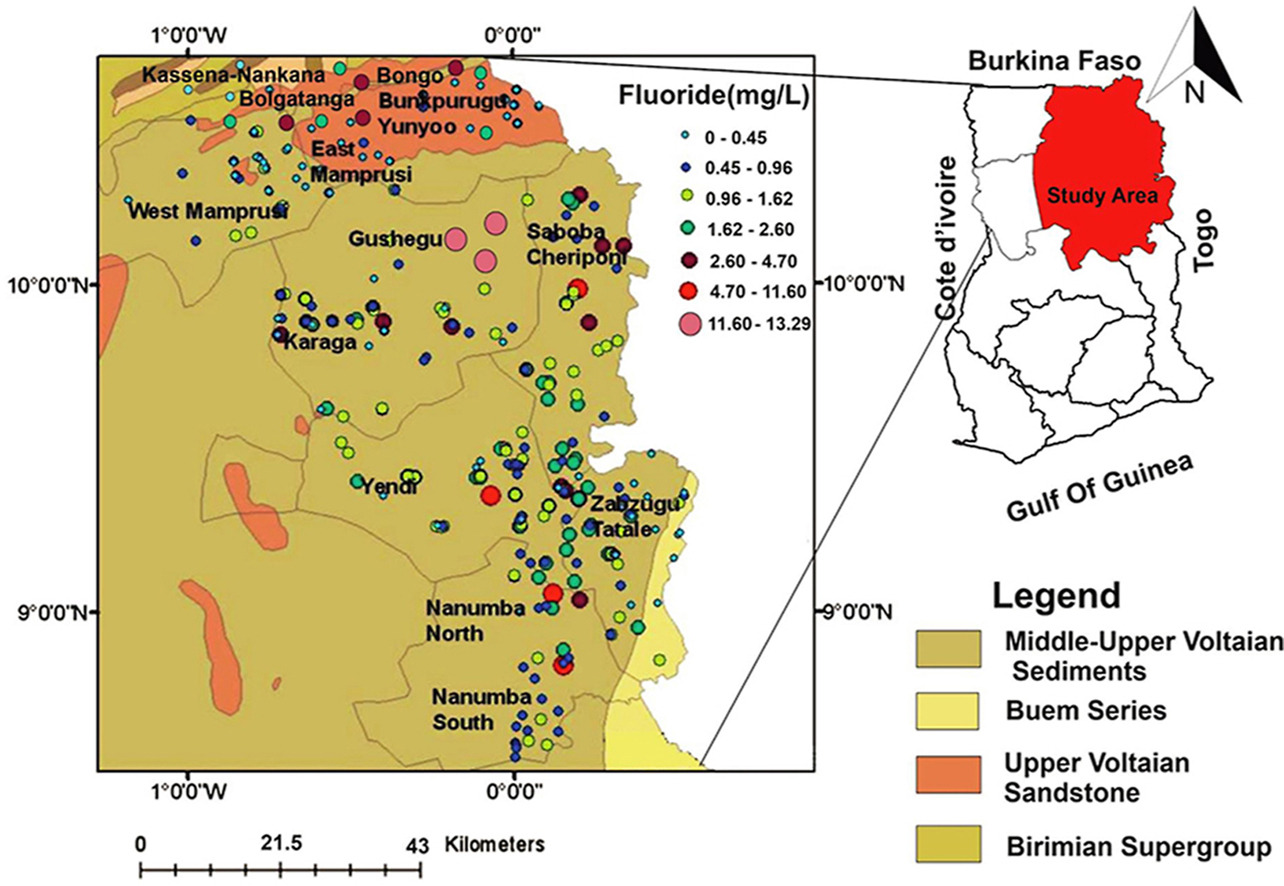 Fluoride (F–) occurs in waters in varied concentrations (Jacks et al., 2005; Brindha and Elango, 2011; Dar et al., 2011; Vithanage and Bhattacharya, 2015a, b). Its natural concentration in waters depends largely on the nature of the geologic formations; fluoride-bearing minerals, anion exchange capacity of aquifer materials (OH– for F–), pH, alkalinity, temperature and residence time of waters within a particular formation (Saxena and Ahmed, 2001; Sunkari et al., 2018; Sunkari et al., 2019; Zango et al., 2019). Some of the minerals that have the greatest impact on the hydrogeochemistry of fluoride are: fluorite, apatite, mica, amphiboles, some clay minerals (such as illite, montmorillinite and kaolinite) and villiamite (Dar et al., 2011; Sunkari et al., 2018). Fluoride is colourless, tasteless or scentless when dissolved in water thereby making it difficult to be determined through physical examination. Its concentrations in waters can only be determined by chemical analysis (Brindha and Elango, 2011).

Fluoride causes health problems in people all over the world. A concentration of at least 0.6 mg/L promotes growth of human teeth and bones (Narbutait? et al., 2007). Intake of groundwater with fluoride levels exceeding 1.5 mg/L will eventually lead to dental fluorosis (Sunkari et al., 2019; Kimambo et al., 2019; Aravinthasamy et al., 2020; Zango et al., 2021; Ijumulana et al., 2021). A further consumption of higher concentration will result in skeletal fluorosis (Brindha and Elango, 2011; Ijumulana et al., 2020, 2021). There are several ways of mitigating fluoride contamination in groundwater. These methods include: dilution of the groundwater contaminated with fluoride, adsorption, ion exchange, and precipitation among others. Preference of any of these methods depends on the: affordability, magnitude of the contamination of groundwater as well as the origin of the contaminants; whether it is natural or anthropogenic (Bannerman and Ayibotele, 1984; Apambire et al., 1997; Abugri and Pelig-Ba, 2011; Brindha and Elango, 2011; Kimambo et al., 2019).

Ghana is one of the fluorosis endemic countries in West Africa. The highly fluoridated parts of Ghana are mainly restricted to the northern fringes of the country, which are largely dominated by varying lithologies involving rocks belonging to the Birimian Supergroup and the Voltaian Supergroup (Fig. 1). These rocks are mainly volcanic and sedimentary rocks that are intruded by granitoids (Fig. 1). The fluorosis endemic parts of Ghana have been the focus of many researchers in the past decades (Apambire et al., 1997; Anku et al., 2009; Atipoka, 2009; Salifu et al., 2012; Yidana et al., 2012; Firempong et al., 2013; Alfredo et al., 2014; Craig et al., 2015, 2018; Anornu et al., 2017; Tay, 2017; Sunkari et al., 2018; Donzagla et al., 2019; Ganyaglo et al., 2019; Sunkari et al., 2019; Zango et al., 2019, 2021; Zakaria et al., 2021). Most of these studies are localized to specific communities, districts, municipalities and districts in northern Ghana. However, there is no comprehensive review on the fluoride menace to the groundwater resources in the entire country. This study aims at reviewing all studies previously conducted in Ghana, especially in the highly fluoridated parts of northern Ghana to elucidate the: groundwater fluoride levels, sources of fluoride enrichment in groundwater, extent and severity of fluorosis, and sustainable mitigation measures of high groundwater fluoride.

Mineralogy and geochemistry of fluorine

Mechanism of fluoride concentration and enrichment in groundwater

The mechanism of fluoride concentration and enrichment in groundwater is explicitly explained by Rao (2011) and Malago et al. (2017) below:

Precipitation waters get enriched in CO2 from the air and soil as well as biochemical reactions of bacteria and organic matter during infiltration (Equations (4), (5))), resulting in an increase in pH and subsequent over-saturation of CaCO3.CO2 + H2O ? H2CO3H2CO3 ? HCO3– + H+

Sources of fluoride in groundwater

Water for domestic purposes, especially drinking water is the major source of F– intake in humans (Antwi et al., 2011). Most of the people affected by highly fluoridated groundwater are low income earners and they largely live in the tropical countries (arid and semi-arid regions), where the per capita consumption of water is high due the dry climatic conditions (Kim et al., 2010). In Ghana for instance, the daily consumption of water is about 3–4 L/day per adult, which is higher than the WHO

Various measures proposed by researchers for mitigation of F– contamination in water are summarised in a schematic chart in Fig. 4. They are classified into in-situ and ex-situ measures (Fig. 4). In-situ methods aim at mitigating the concentration of F– in the aquifer through artificial recharge (Bhagavan and Raghu, 2005; Brindha and Elango, 2011). The ex-situ methods aim at the decontamination of water at the household or community level (Brindha and Elango, 2011).

The presence of F–-bearing minerals in the host rocks and water-rock interactions in an alkaline environment under dry climatic conditions have been established to be the main causes of F– enrichment and contamination in groundwater. Chemical processes such as decomposition, dissociation, and dissolution are also responsible for the mobility and transport of fluoride in groundwater. Chemical weathering under arid to semi-arid conditions with relatively high alkalinity and long residence time

The authors declare that they have no known competing financial interests or personal relationships that could have appeared to influence the work reported in this paper.

The authors thank everyone who contributed to improving the quality of this paper, especially the Editor and the three anonymous Reviewers.