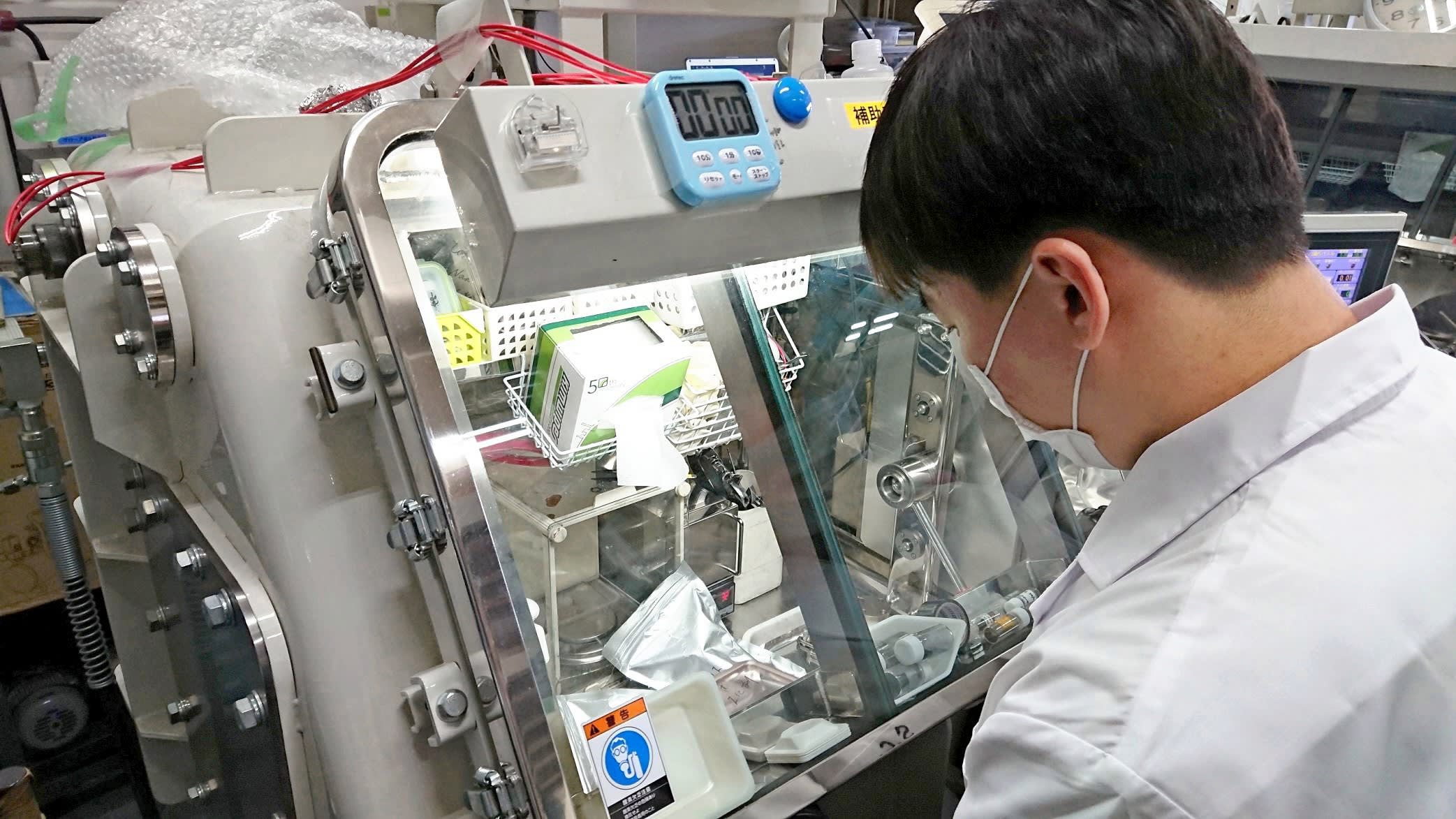 OSAKA — A team of researchers from Kyoto University and Toyota Motor is making solid progress developing next-generation battery technology that has the potential to cram far more energy into a small, lightweight package than today’s standard lithium-ion, or li-ion, batteries.

The new fluoride-ion battery the researchers are working on, which would hold about seven times as much energy per unit of weight as conventional li-ion batteries, could allow electric vehicles to run 1,000 km on a single charge.

The team has developed a prototype rechargeable battery based on fluoride, the anion — the negatively charged ion — of elemental fluorine. A fluoride-ion battery, or FIB, generates electricity by shuttling fluoride ions from one electrode to the other through a fluoride-ion-conducting electrolyte.

The prototype was created by a team of researchers led by Yoshiharu Uchimoto, a professor at Kyoto University. It uses an anode, or negatively charged electrode, composed of fluorine, copper and cobalt, and a cathode, or positively charged electrode, made mainly of lanthanum. The researchers have confirmed that the prototype has a higher theoretical energy density, potentially giving it a range up to seven times longer than today’s li-ion batteries.

The ranges of electric vehicles have increased significantly over the years, due to improvements in li-ion battery performance and deceleration energy recovery systems, which recharge the battery using electricity generated by braking. Some of the latest EV models from Tesla and Nissan Motor, for instance, can run up to 600 km per charge under ideal conditions. But experts say there is a theoretical limit to the energy density of li-ion batteries, which means their range cannot be extended much further.

The researchers at Kyoto University and Toyota have turned to the FIB because of its theoretically higher energy density. This translates to smaller, lighter batteries with same performance as li-ion cells, or, if they were made the same size and weight as today’s li-ion batteries, could put out juice for longer between charges.

The researchers have gone for a solid electrolyte in place of the liquid ones typically used in li-ion batteries. One key advantage of such solid-state batteries is that they cannot catch fire, which means engineers do not have to worry about creating systems to prevent overheating.

The researchers are betting that a solid-state FIB battery can solve the puzzle of building an EV that can run 1,000 km on a single charge. Many experts remain skeptical, however.

The biggest challenge is that up to now FIBs work only at high temperatures. Fluoride ions are only known to be usefully conductive, that is, to move toward a polarized electrode, when the solid-state electrolyte is sufficiently heated. This makes FIBs impractical for many consumer applications. The high temperatures required also cause the electrodes to expand.

The Kyoto University-Toyota team says it has figured out a way to keep the electrodes from swelling by making them from an alloy of cobalt, nickel and copper. The team plans to tweak the materials used in the anode to ensure that the battery can be charged and discharged without losing capacity. In 2018, scientists from the Honda Research Institute, together with researchers at the California Institute of Technology and NASA’s Jet Propulsion Laboratory reached an important milestone with FIB technology: the ability to operate power cells at room temperature, rather than heating them to high temperatures.

In a paper published in Science, co-author Robert Grubbs, a Caltech researcher, says, “Fluoride batteries can have a higher energy density, which means that they may last longer — up to eight times longer than batteries in use today.”

Other studies are underway in Japan and overseas to find an alternative to li-ion batteries, with magnesium and aluminum ions among the promising candidates.

The race to develop such a battery is intense. Whoever develops the best-performing rechargeable batteries will become the global leader in this vital piece of technology, says Yasuo Ishiguro, executive director at the Consortium for Lithium Ion Battery Technology and Evaluation Center, a research institution in Osaka.

Advances in rechargeable battery technology will not only result in better EVs. It will allow them to serve as a ubiquitous form of storage for electricity generated from renewable sources such as solar power, helping to power society with clean energy.

New battery technology will allow us to “realize a new society without making massive infrastructure investments,” says Akira Yoshino, a fellow at chemical maker Asahi Kasei who shared the Nobel Prize in chemistry in 2019 for his contribution to the development of commercially viable li-ion batteries.

Researchers around the world competing to create better li-ion batteries. A LIBTEC project aims to develop solid-state li-ion battery technology by April 2023. Toyota and Panasonic are involved in the effort.

Despite growing hopes for FIBs, they will not hit the market for a while. Many experts believe it will be sometime in the 2030s before commercially viable FIBs are available. A prototype li-ion battery was developed in 1985 but the batteries did not become commercially available until 1991.

The key challenge for engineers is to find the best combination of elements — which ions should be used, and which chemicals should make up the electrodes and electrolytes. The combination goes a long way toward determining the performance of the battery.

Ishiguro stresses Japan’s advantages in this race, pointing to the technological skills of the country’s universities, carmakers and materials manufacturers. But Japan is less good at chemistry and the systems integration needed to maximize product performance. The battle for supremacy in batteries will be hard fought.

The winners are likely to be those who most effectively use state-of-the-art technologies and advanced manufacturing techniques, such as artificial intelligence-based “materials informatics.” This involves applying the principles of informatics — using information science to solve problems — to materials science and engineering to achieve development goals.

The U.S. and China, which lead in AI and next-generation computing technology, will be formidable rivals in the battery race.

To keep up, Japan will also need a strategy that incorporates mass production and market development. Japanese companies have bitter memories of losing their edge in the global li-ion battery market around 2000 to new competitors from China and South Korea, which seized market share by offering lower-priced products. Companies in all these countries are bent on staking a claim in the market for the batteries that will power the future.