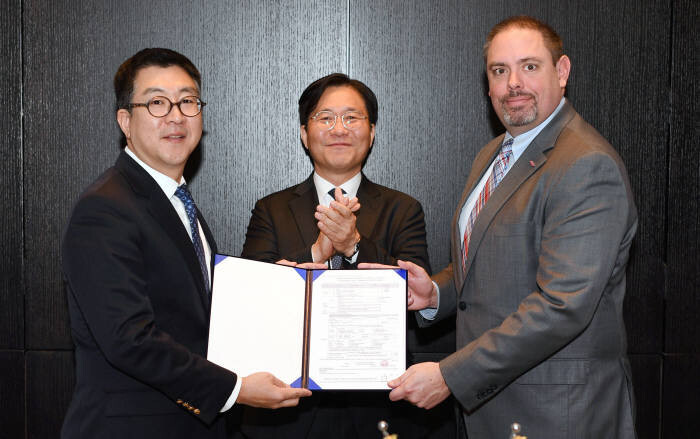 While reporting that multinational chemical firm DuPont has decided to build a photoresist production facility in South Korea, the Nikkei predicted that, if other companies follow in DuPont’s footsteps, it could impact the competitiveness of Japanese companies. On Jan. 8, DuPont confirmed plans to build a plant for extreme ultraviolet (EUV) photoresist in South Korea and submitted documents detailing an investment worth US$28 million. South Korea’s Ministry of Trade, Industry, and Energy has been wooing DuPont in an effort to diversify the supply chain after the Abe administration’s export controls.

Six months later, warnings that the export controls might backfire against the Japanese economy are starting to become a reality. Japanese exporters are suffering greater losses than South Korean importers. In addition to finding substitute suppliers, the South Korean government and companies have been racing to localize production of key materials. Recently, a South Korean chemical materials firm called SoulBrain finished building a new factory for ultrapure hydrogen fluoride and expanding existing facilities, even faster than expected, setting up a mass production line. In short, the efforts by companies to overcome the Abe administration’s economic retaliation and support from the South Korean government are getting definite results. Japanese companies are reportedly becoming more worried that, if things continue, they might be permanently shut out of the South Korean market.

Yasuo Morita, president of Morita Chemical Industries, had voiced such concerns in an interview with the Nikkei back in August 2019. “Toughening export management could have the result of lowering Japanese companies’ market share,” Morita said.

From the outset, the Abe administration’s export controls were a blunder. Hardly any countries try to exact retribution by restricting exports, rather than imports. Since export restrictions damage domestic companies as well as their intended targets, they tend to be counterproductive. And since they also disrupt the global supply chain, they provoke an international backlash, making their large-scale use impractical. Nevertheless, the Abe administration made this rash move, apparently believing that Seoul would capitulate to save the semiconductor industry, the crown jewel of the South Korean economy.

The fervor of the South Korean public’s boycott campaign on Japanese products shows no signs of cooling. Figures released by the Japanese government’s tourism bureau indicate that the number of South Korean tourists who visited Japan in November 2019 was down by a whopping 65.1% from the same month in 2018. That decline has continued for months now, with South Korean visitors declining by 7.6% in July, 48% in August, 58% in September, and 65.5% in October.

Losses are piling up in tourist destinations in the Japanese countryside, such as the islands of Kyushu and Hokkaido. In a press conference on Jan. 10, Uniqlo CFO Takeshi Okazaki admitted that the company was experiencing serious difficulties. Takeshi was the same man who predicted in July 2019 that the South Korean boycott wouldn’t last very long. Meanwhile, Japanese automobiles and beers are still struggling to regain the favor of the South Korean public.

The Abe administration needs to halt such silly and self-destructive behavior. It should retract the export controls, which are neither beneficial nor justifiable. That’s also the best course for the Japanese economy.