Police have given two men a warning after delivering letters to a number organisations calling supporters of planned poison drops terrorists.

The letters came ahead of planned drops of the pesticide on the South Island’s West Coast. The West Coast has been a hot spot for the issue, where aerial 1080 drops covered 230,000 hectares of the region in late 2016.

A Department of Conservation (DOC) spokeswoman said 1080 was scheduled to be dropped at 25,000 ha of Cascade Hope, in South Westland, sometime this year. Other organisations were supporting DOC with the distribution, including a planned drop in the region in the next month. 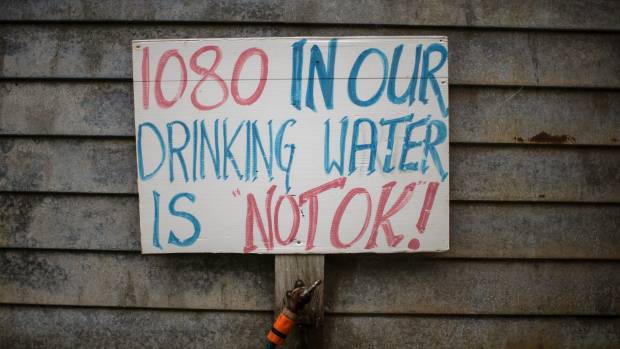 A sign outside a 1080 activist’s home in the bush, near Hari Hari on the South Island’s West Coast.

West Coast police said on Friday they were investigating following the distribution of the letters, which opposed the use of the poison to control the spread of tuberculosis by pests like possums rats and stoats.

The letter suggested anybody involved or associated with the 1080 programme was committing an act of terrorism. 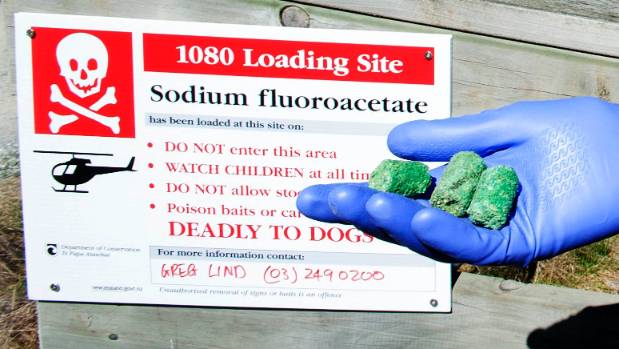 West Coast police are investigating a group of activists against the controversial pesticide 1080 for sending letters calling organisations terrorists.

Spokesman for anti-1080 group Hikoi of a Poisoned Nation Alan Gurden posted to Facebook a video of himself reading an excerpt of the letter in the West Coast Regional Council foyer on Thursday.

“We believe that your terrorist actions are torturing and offering undue acts of cruelty to non-targeted species … you have poisoned our children’s future and as such we wish you to cease and desist.”

He posted a notice on the council’s door warning the public they were entering a “terrorist entity associated with known terrorists”.

Gurden said in a post on the anti-1080 group’s Facebook page it was “time to take our eco-system back from the hands of these terrorist maniacs before they kill it all”.

Some activists say the poison harms native birds and does more harm than good.

Some anti-1080 protesters have taken credit for sabotaging Department of Conservation (DOC) worker’s vehicles, including loosening wheel nuts, and abusing DOC staff. Rangers had been subject to online abuse and harassment, including one who had their photograph posted online with protesters calling for his home address.

Some activists in the North Island vowed “all out war” against DOC last December, with threats to take down its helicopters as they dropped the controversial pesticide.

“We are going to bring you bastard to your knees,” said  letter sent to DOC by a group calling themselves the New Zealand Hunters.

Aitken said while all people had the right to freedom of speech and peaceful protest, threats made towards individuals or organisations involved in the 1080 programme would be “treated seriously”.

Police had “no issue with interest groups being passionate about their beliefs and cause” but there would be “no tolerance” of any individual or group taking unlawful action.

The pesticide was put in traps over 11,400ha of Westland’s Haast Range in 2017 as part of DOC’s Battle for our Birds pest control operation. It was dropped at sites in Abel Tasman, Arthur’s Pass, Murihiku, Fiordland, Buller and Central Otago.