Distribution pattern of fluoride and arsenic in groundwater (n = 984) from 35 wards of Rajpur-Sonarpur Municipality and its associated health risk have been evaluated. Presence of fluoride >1.5 mg/L (mean = 1.9 mg/L, range: 1.51–2.9 mg/L) and <1.5 mg/L (mean = 0.6 mg/L, range: 0.01–1.49 mg/L), whereas, for arsenic >10 ug/L (mean = 56.2 ug/L, range: 10.1–213 ug/L) and <10 ug/L (mean = 3.3 ug/L, range: <3–9.7 ug/L) have been observed in the studied groundwater samples. Simultaneous occurrence of fluoride and arsenic above their permissible limit in drinking water were found from two wards (ward number 6 and 7). About 13% and 16% of the collected groundwater samples (n = 984) have been found beyond the permissible limit of fluoride and arsenic, respectively. Mean concentrations of calcium and iron in groundwater were 31 mg/L (range: 7.3–184 mg/L) and 3.79 mg/L (range: <0.05–50.4 mg/L), respectively. The distribution of both fluoride and arsenic was established with a moderate positive correlation value (r = 0.30) and their relationship is dependent on the interrelationship between Ca and Fe. While the negative correlation between F– and Ca (r = -0.33) designates the increasing F–/Ca ratio in solution. Cluster analysis showed that calcium, iron and the two above contaminants are likely to be highly concentrated in the depth ranges 30.5–60.9 m, 60.9–152 m and 152–305 m. The highest concentration of both the toxicants has been observed in the depth range of 24.4–30.5 m. Weak (fluoride) to strong (arsenic) correlation between water & urine showed exposure of two toxic contaminants. Modelled Average Daily Dose (ADD) and Targeted Hazard Quotient (THQ) of fluoride and arsenic were found maximum for adults followed by teenagers and children. Cancer risk of arsenic was estimated higher than the threshold value among all the age groups. 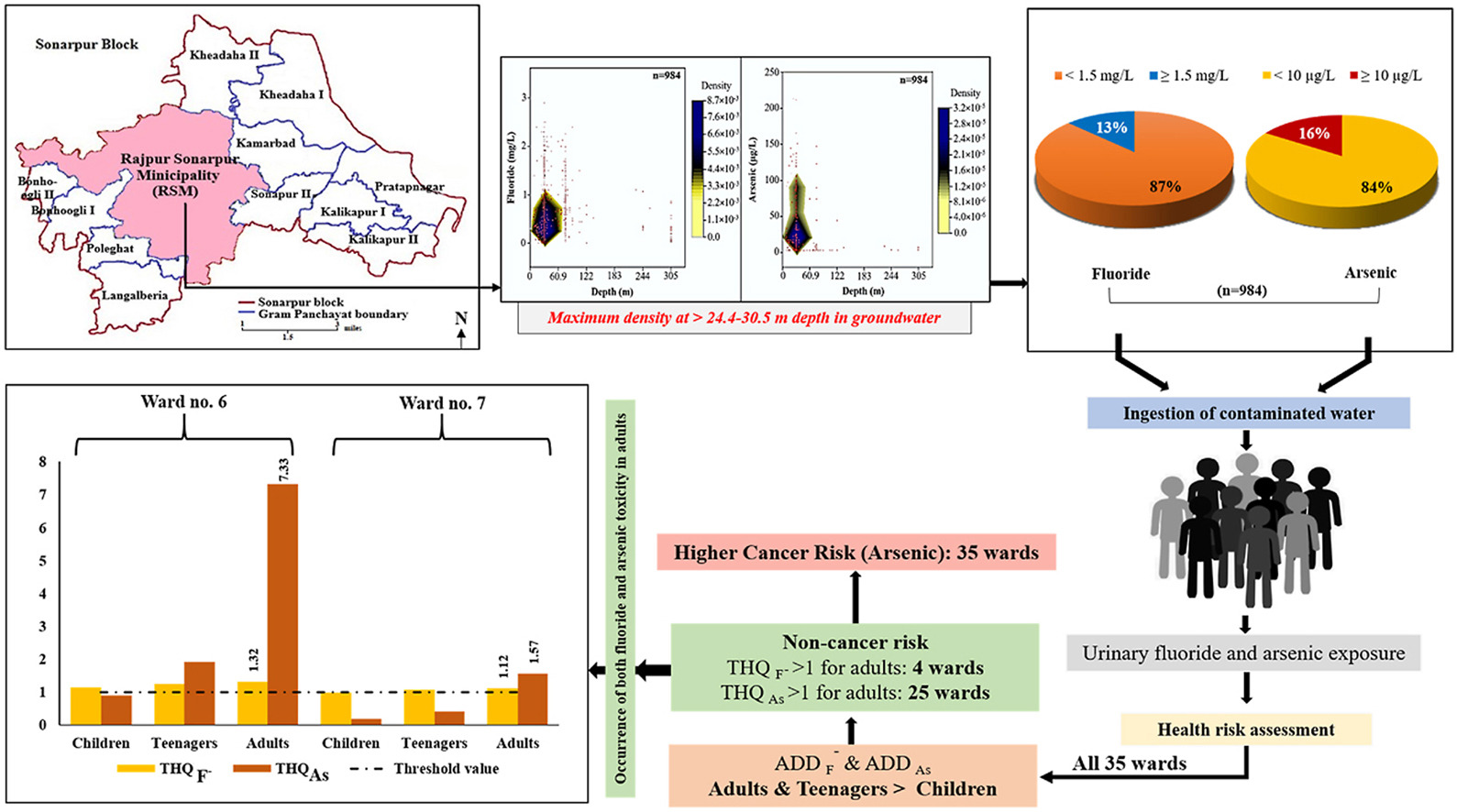 Presence of fluoride and arsenic in groundwater has affected more than 300 million people all over the world (Bhattacharya et al., 2020; Bibi et al., 2017). Groundwater from deep and shallow tube-wells is mainly used for drinking purposes, agricultural production, and industrial processing (Mishra and Bhatt, 2008). About 110 million people residing in south Asia are majorly affected by fluoride and arsenic through groundwater (Ain et al., 2017; Brammer and Ravenscroft, 2009). The Indo-Gangetic and Brahmaputra flood plain in India and Bangladesh have been identified as a major hotspot of both these contaminants (Bhattacharya et al., 2020; Kumar et al., 2016, 2017).

Fluoride-contamination in groundwater has been reported worldwide (Maity et al., 2021); nevertheless, arid and semi-arid regions are enormously affected (Moghaddam and Fijani, 2008; Raj and Shaji, 2017). Fluoride endemic areas have been identified all across the southern and western parts of India comprising 20, out of 29 states and a substantial population, approximately 401 million (40% of Indian population) live in fluoride endemic 201 districts (Brindha et al., 2011; Chakraborti et al., 2016). Fluoride-contamination in groundwater initiates mainly from weathering of minerals like fluorite, mica, topaz etc. (Yadav et al., 2018). Likewise, in the Bengal basin, silicate minerals are reported to be responsible for fluoride leachability in groundwater (Datta et al., 2000).

In increased pH conditions, arsenate and fluoride both can contaminate groundwater simultaneously through desorption from negatively charged metal oxides (Kim et al., 2012; Maity et al., 2017). The dissolution of Fe (hydr)oxide plays a potential role in the mobilization of arsenic during the recharge of aquifers through rainfall (Chakraborti et al., 2016; Patel et al., 2019); while, mobilization of fluoride occurs due to the dissolution of silicate and calcium minerals or degassing of CO2 (Bundschuh et al., 2013, 2017; Rao, 2011; Sahu et al., 2018).

Mandal et al. (1998) reported the groundwater arsenic-contamination and its adverse human health effect from the gram panchayat areas of Sonarpur block, South 24 Parganas district, West Bengal. However, no evidence was available from the Rajpur-Sonarpur Municipality area in Sonarpur block, which consists of two separate towns Rajpur and Sonarpur including 35 wards administered by Kolkata Metropolitan Development Authority (KMDA). Based on the previous investigation by Public Health Engineering Department, Govt. of West Bengal, the groundwater in the region of Sonarpur block was reported as fluoride-contaminated (PHED, 2007). However, the exact location of contamination and its extent were not reported. Hence, the present study has been focused on the spatial and depth-wise distribution, prevalence and health risk of fluoride and arsenic in groundwater from 35 wards of Rajpur-Sonarpur Municipality to determine the exact location of contamination and its extent. Principal component analysis (PCA) has been performed to identify the relationship among the four elements present in groundwater including two major elements like iron and calcium along with arsenic and fluoride. The acute exposure has been evaluated through estimation of the toxic elements in urine. Fluoride and arsenic induced health risk assessment (Targeted Hazard Quotient and Cancer Risk) has been measured using modelled ADD response of these toxicants through drinking water among the three different age groups i.e. children (3–10 years), teenagers (11–19 years) and adults (20–70 years). To the best of our knowledge, this study might be a unique one that provides a clear insight into the distribution and prevalence of fluoride and arsenic in groundwater and associated human health risk from 35 wards of Rajpur-Sonarpur Municipality.

Prevalence and distribution of fluoride and arsenic

With the rapid rise in population and urbanization in Rajpur-Sonarpur Municipality, the freshwater demand is increasing day by day. As a result, the inhabitants residing in this area are dependent on groundwater to serve their daily needs. The maximum presence of fluoride and arsenic was found at a depth layer of 24.4–30.5 m. The existence of both the toxic contaminants (fluoride and arsenic) in groundwater had been decreased considerably below 152 m of depth, which is relatively safe for daily

The authors declare that they have no known competing financial interests or personal relationships that could have appeared to influence the work reported in this paper.

The authors acknowledge the local populations of Rajpur-Sonarpur Municipality for showing their willingness to involve into the work and providing the samples and related information to carry forward the research study. Primary contributions in the investigation study from Mr. Sourav Maity amd Mr. Bishal Ghosh during their M. Tech dissertation work are acknowledged. Authors convey their sincere thanks to the administration of Rajpur-Sonarpur Municipality and Mr. Tuhin Das Chandra, the renowned